Sochi Olympics in the wake of Russian anti-gay laws 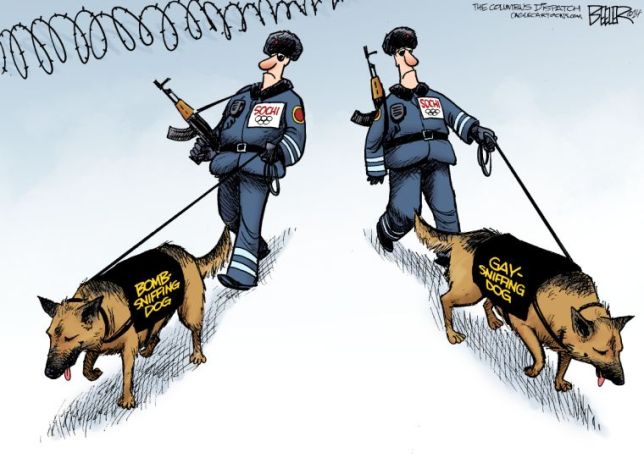 Sochi Olympics in the wake of Russian anti-gay laws

The Olympic Games are an exciting time for countries and athletes around the world to put aside their cultural differences to enjoy some good ol’ fun and games; to share the pride of representing their countries; and to challenge one another to reach the heights of human achievement.

Unfortunately, the excitement surrounding the 2014 Sochi Winter Olympics in Russia have been overshadowed by a brewing controversy over an anti-gay “propaganda” law that was unanimously passed 436-0 by the Russian government in June 2013.

This law prohibits anyone from spreading the “propaganda of non-traditional sexual relations” to minors. Mentioning homosexuality to a child, or showing any support for the LGBT community will not be tolerated under the new legislature. The law also makes it illegal to equate straight and same sex relationships. Anyone found in violation of this law risks being fined between 4,000 to 1 million rubles ($120 to $30,000.)

Russia has consistently enforced anti-gay laws including a law from 2012 which makes it illegal to hold gay pride events in Moscow—for the next 100 years.

It doesn’t end there. Another anti-gay law in the works would allow children to be taken away from same-sex parents.

The world has expressed disgust over these recent types of laws. People are scrutinizing the tension and hostility towards the LGBT community and how it will impact the safety of gay athletes and guests at the Olympics.

At a meeting with Sochi Winter Olympics volunteers on Friday Jan. 17, Putin assured the press that homosexuals will experience no discrimination while attending the Olympics and should feel “at ease.” The fact that he has to make this statement at all is at least unnerving to the gay community.

After Russia initially banned all rallies and protests during the games, Thomas Bach, the president of the International Olympics Committee, said on Monday that the Russian government would set up designated protest zones for “people who want to express their opinion or want to demonstrate for or against something.”

Still, this provides little comfort in the wake of the vague law that prohibits “the spreading of gay propaganda to minors.” What does that mean, exactly? Let us hope that it isn’t an excuse for ignorant government officials and their law enforcement minions to exercise their homophobic fears at the expense of the dignity of Olympic Athletes or the Olympic Spirit.

A specific provision of the law states that gay or pro-gay foreigners expressing their beliefs in the company of minors can be jailed for up to 14 days before being sent back to their country. People around the world are worried about guests who may choose to wear ribbons, buttons or hold flags in support of the LGBT community.

President Barack Obama has expressed his disappointment in Russia’s inability to recognize equality in all people. Although the White House did not directly address Russia’s anti-gay laws, President Obama said in his January 28th State of the Union Address, “We believe in the inherent dignity and equality of every human being, regardless of race or religion, creed or sexual orientation.”

For the first time since 2000, the U.S. will not be sending a president, former president, first lady or vice-president to the games. The White House says that President Obama’s schedule prevents him from attending. France and Germany, among other countries, will also abstain from sending their presidents to the Sochi Olympic games.

Attempts from around the world to boycott the 2014 Winter Olympic games have failed, along with a petition that proposed moving the games to Vancouver, Canada. In a recent phone conversation between President Obama and Russian President Vladimir Putin, the men agreed that they wanted to focus on a single shared goal: keeping the Olympics safe.

With the opening ceremonies right around the corner, anticipation about whether or not that will happen is growing.