Women end track and field season on a high note 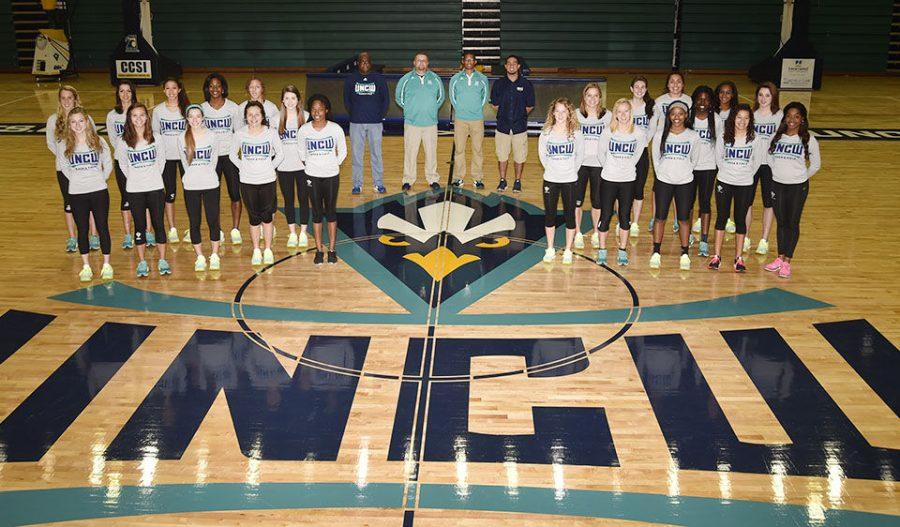 Team photo of the women's track and field team along with their coaches.

The women’s track and field team ended their indoor season on a high note this year. After a crippling cut to the program, Chancellor Jose Sartarelli, interim head coach Layne Schweir and the rest of the team worked relentlessly to bounce back stronger than ever.

During his first year as head coach, Schweir highlighted the wounds that were left on his team when the program was cut.

“We’re focusing on individual goals,” says Schweir. “We are selling the rebirth of the team.”

One athlete in particular who capitalized on her performance regardless of the situation at hand was senior captain Meredith Bozzi, who recently set her fifth school record at the Virginia Tech Challenge. Over the past three years of participating in the Virginia Tech Challenge, Bozzi has surpassed UNC Wilmington’s 600, 800, and 1,000 meter record.

“I went in with a goal and was really pumped to meet it,” said Bozzi. “I owe my successes to training, working in the weight room and the genuine support of my teammates.”

After graduation, Bozzi hopes to work in a children’s hospital in Cincinnati. Though her competitive career may be coming to an end, Bozzi can’t imagine her life without running.

The Virginia Tech Challenge proved not only successful for Bozzi but the majority of the team as well. According to Schweir, 80 percent of the team had personal bests during the meet.

Alexis Dickerson was successful in shot put by throwing a good 5 feet farther than she was at this time last year. Senior pole vaulter Carolyn Elder was also successful along with the 4×4 members, including Alyssa Omile, Ari Whiteside and Jaime Mangold. Freshman Courtney Cefalo also made great strides during her first year as a Seahawk by achieving three personal bests during the indoor season.

“Cefalo had a good start to her freshman season,” says Schweir. “She’s a multi-talented athlete who stuck with us through a hard time.”

Cefalo described her team as a huge family that made her feel welcomed coming in as a freshman.

“A smaller team has its ups and downs,” said Cefalo. “On one hand, the things you do right get acknowledged and appreciated, but on the downside, your flaws and mistakes stand out just as blatantly.”

It takes more than athleticism and practice to keep these women excelling in the sport.

“It’s a lot more than people see,” says Schweir. “The girls have mandatory study hall, weight room three to four days a week, and the majority of them spend time in the training room on top of daily practices.”

“Being a student athlete is truly a full time job,” said Schweir. “These people are out there doing what they’re doing because they enjoy it.”

The track and field program is working on fundraisers for a new track and some upcoming renovations in efforts to continue rebuilding their team and working back to their long standing history of success.

The Seahawks’ track and field outdoor season starts on March 5, with their first home meet on March 11.