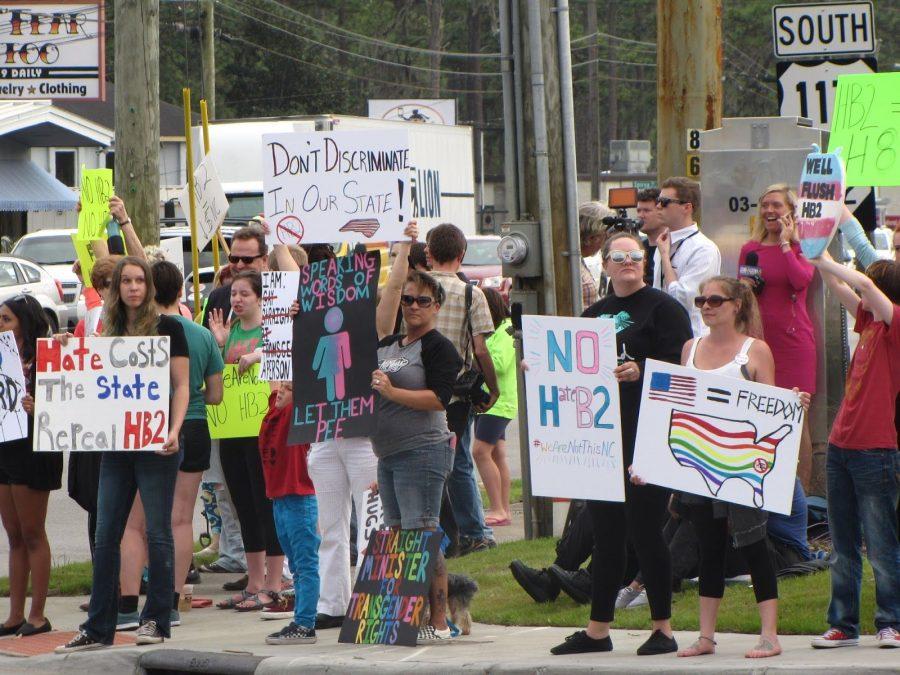 Members of the Wilmington community rally in opposition to House Bill 2, a new law in North Carolina, passed last week.

Wilmington locals and community members gathered at the busy intersection of South College Road and Oleander Drive on Friday evening, in defiance of North Carolina’s recent passing of House Bill 2. Governor Pat McCrory and proponents of the law believe it stops “the breach of basic privacy and etiquette,” while others deem it discriminatory and distasteful.

Infamously called the “bathroom bill,” the new law mandates a person must only use the public gender-specific restroom that matches his or her birth certificate.

“They took away local ability to do anything, even pass minimum wage laws,” said Sarah Priebe. Priebe is confident HB 2 will be repealed, like similar legislation in Indiana and Georgia. Her positive statement, “there’s a lot of love here,” did not stand alone.

In 2015, Indiana passed the Religious Freedom Restoration Act, which gave businesses legal grounds to refuse service to specific individuals based on their personal religious beliefs.

In an effort to curb the national criticism RFRA received, an amendment was passed the following month, protecting the LGBTQ community.

“Everyone should have the right to use whatever bathroom they feel is right,” said Stephanie, a Wilmington local.

Another controversial bill, Georgia’s “religious liberty” law, House Bill 757, was vetoed last week by Governor Nathan Deal. According to the Washington Post, Deal was troubled by the possibility that the bill could lead to “state-sanctioned discrimination.”

In both Indiana and Georgia, these bills could have pushed companies and industries out of those states, negatively impacting their state economies, and the case is the same in NC.

For example, HB 2 could affect the National Basketball Association’s 2017 All-Star Game, scheduled to be held in Charlotte, NC.

The overwhelming issue for North Carolinians is what many see as the discriminatory aspects of the bill, but they do not believe the fight against HB 2 is near over.

For Lola Byers-Ogle, aged 13, Friday’s rally was a family outing.

“This isn’t a dead end,” said Byers-Ogle. “We actually have a chance to get somewhere.”

This wasn’t her first rally, either. In 2008, Byers-Ogle rallied with Obama, and more recently she supported the NAACP in downtown Wilmington with her mother, Lupin Byers.

“As frightening and upsetting as HB2 has been, it’s sort of brought those friends and allies out, so it’s easier to recognize that we’re not alone,” said Byers.

An injured leg didn’t stop the youngest of the trio from supporting her LGBTQ friends, either. Louise Byers-Ogle, aged 12, says she is proud to be “the generation of the future,” emphasizing the importance of voting when she is old enough to do so. The Byers believe that inclusion is a family value.

Mandy Parker was rallying with her son, because she wants him to grow up knowing that everyone should have equal rights, that nobody should be treated differently because of their sexual orientation or whether they’re transgender.

Active rally members were not the only ones in opposition to HB 2. Whether it was a thumbs up, a cheer or a honk, many cars driving by showed their support to the crowd.

UNC Wilmington students and faculty were also present at the rally. Dr. Michaela Howells, a professor at UNCW, believes it is our job as North Carolinians to stand up for civil rights in every single way we can.

Friday’s protesters united with one goal in mind: to overturn House Bill 2. Parker suggests that people write to their politicians, congressmen, anybody who will get on board with fighting HB 2.