REVIEW: ‘Turning Red’ has a lot of heart but falls short of Pixar greatness 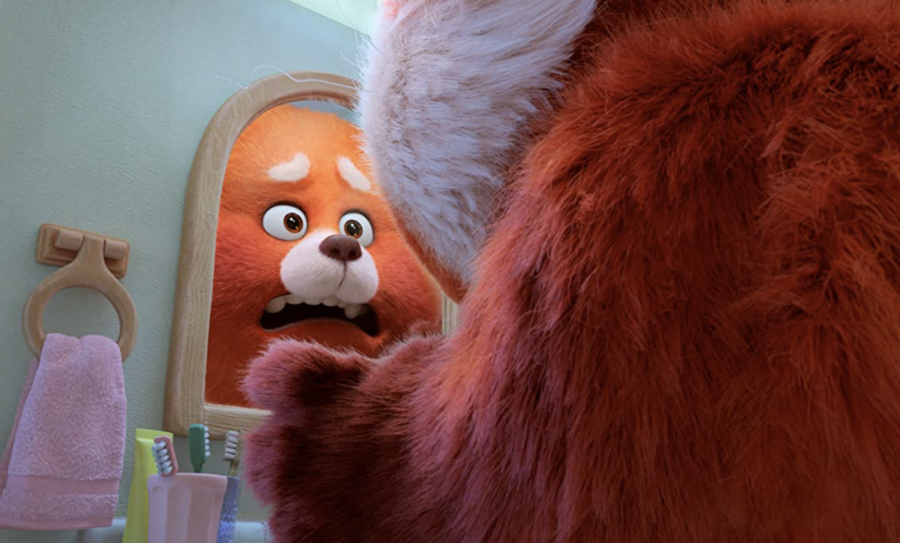 Over the years, Pixar earned its reputation as one of the greatest animation studios in Hollywood. Whether it’s a short or a feature, Pixar films tend to deliver effective stories in ways that are imaginative and fun for the whole family. Their latest release, “Turning Red,” is no different in regards to the latter. However, the story finds itself lacking in true effectiveness by the film’s end due to a noticeable absence of nuance that is usually present in Pixar movies.

Domee Shi’s feature-length directorial debut “Turning Red” is the coming-of-age story of middle-schooler Meilin (Rosalie Chiang), who struggles to be a normal teenager while trying to please her overbearing mother, Ming (Sandra Oh). As if normal puberty wasn’t enough to tackle, a “family blessing” turns her into a giant red panda whenever she gets emotional. However, when Mei and her friends Priya (Maitreyi Ramakrishnan), Miriam (Ava Morse) and Abby (Hyein Park) use this newfound ability to their benefit, Meilin learns to embrace the side of her that she had been too afraid to show.

While interesting as a concept, the story of “Turning Red” doesn’t make it stand out among other movies in the Pixar roster. Much of the film revolves around the complexities of growing older. It is very much akin to what is seen in “Finding Nemo” and “Inside Out.”

Don’t be fooled, though, because there is still a lot of passion here. The visuals are absolutely stunning and unlike anything we’ve seen in a Pixar movie to date. The style blends Pixar’s traditional 3-D animation with a certain flare that is reminiscent of anime. This particular style also works very well with the film’s nostalgic setting of the early 2000s, which is shown through the music, technology and apparel.

The film’s flashy visuals are accompanied by a flamboyant cast of characters. Meilin serves as a strong lead whose dorkiness and confidence compliment each other in a way that is natural and refreshing. Some of the supporting characters also bring a lot to the table, including Meilin’s father, Jin (Orion Lee), who, despite initially filling the submissive parent role, becomes a standout by the end. However, it’s Meilin’s friends, Priya, Miriam and Abby, who really steal the show. The four girls share a powerful dynamic that is authentic, heartfelt and entertaining.

While the movie focuses heavily on Meilin and her friends, the real core of the story is Meilin’s relationship with her mother. Ming’s extreme overprotectiveness and Meilin’s compulsive need to honor her perfectly is something that many viewers are sure to identify with. Meilin’s internal conflict, however, is perhaps even more universal. Her time as the red panda brings her to the realization that she has a choice between being her true self and remaining the “perfect daughter.”

“Turning Red” presents itself in a childish light that works well with the overall tone of the film. A lot of the exposition early on is given by Meilin herself through voiceover and fourth wall breaking, which is pretty standard for movies like this. It’s not until that obvious way of presenting information to the audience goes beyond exposition and affects how the film delivers its theme that it becomes a problem.

The emotional weight carried by the central theme is lessened by its blunt execution. The red panda begins to feel redundant as an allegory for adolescence since everything surrounding that idea is so straightforward. The characters in the film frequently acknowledge Meilin’s changes, even though they’re apparent. This fumbles what had the potential to be a satisfying character arc, with the metaphorical red panda only adding to the film’s issue with subtlety, or a lack thereof.

Most Pixar movies convey their themes in ways that kids may not understand or appreciate right away. However, “Turning Red” doesn’t provoke much thought by the end since what’s meant to be taken away is pretty much spelled out for the audience, leaving little to no room for interpretation.

“Turning Red” may not be Pixar’s most amazing film despite what it does offer. It’s childishly entertaining, easy on the eyes and features memorable characters that are sure to win the hearts of many. However, because the story fails to make any real attempt at a subtle approach to its theme, it loses emotional impact. It’s truly unfortunate that “Turning Red” is only a good movie when it could have been a great one.