OP-ED: I was an Evangelical Christian. Here’s why I’m no longer religious. 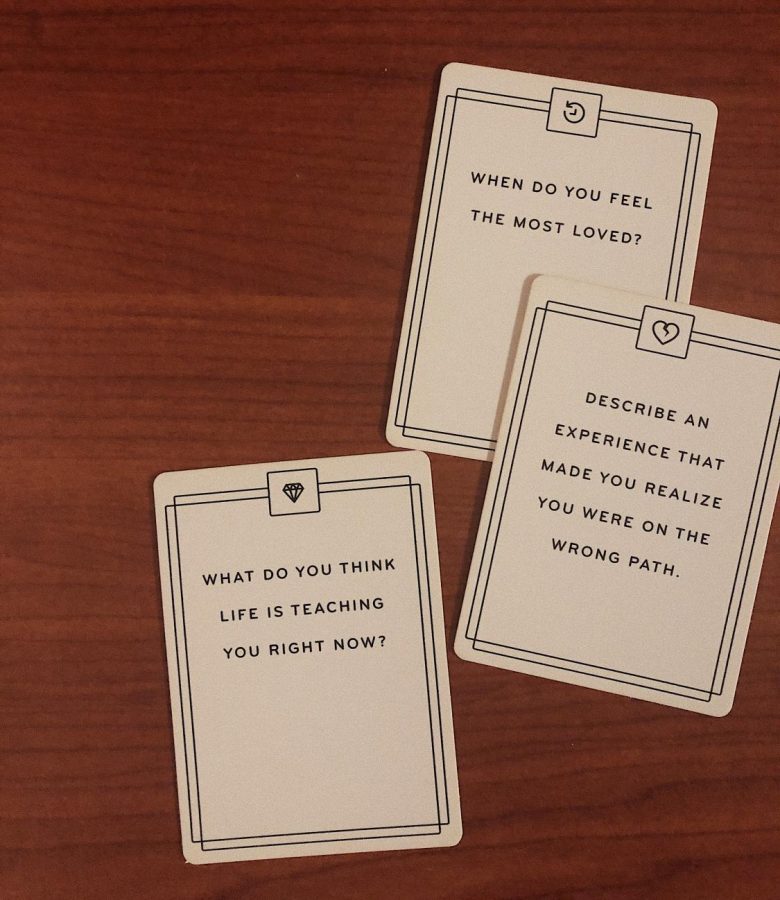 Questions from “199 Questions to Ask Strangers”—or yourself.

You have probably seen the colorful chalk messages written on our sidewalk squares, pop-up tents housing free hand sanitizers, and cardboard signs offering information about the “truth.” It’s hard to miss such advertisements on a campus populated by so many religious organizations, at least five of which subscribe to the Christian faith.

“Please take a free keychain, just leave your email right here!” a bright-eyed student would exclaim, much like I used to do at the beginning of my freshman year. It was 2019, a time when face masks still referred to those things you bought at the dollar store for an at-home spa night, and people regularly stuck their fingers in bowling balls without a second thought. My biggest concerns were whether I had missed any Canvas assignments, and whom I could recruit to “church-hop” with me that weekend.

I was a shy freshman eager to build a sense of community. During high school, I attended church on both Wednesdays and Sundays, occasionally leading lessons for the Fellowship of Christian Athletes club in my high school gymnasium. I talked about how I coped with anxiety and learned to become more comfortable in my own body—practical sentiments that helped me trudge through the living hell that is high school itself.

But the type of Christianity that I would soon encounter in Wilmington was a bit more intense. In the fall of 2019, I joined an organization that would change the course of my life entirely—one that furthered the doubts about my Christian faith that I had been suppressing for quite some time, far longer than I ever wanted to admit.

I remember one specific weekend retreat in which around 30 female students and leaders crammed into an Airbnb living room where we were told to settle in for the next three hours. These retreats usually consisted of morning sermons, free time, afternoon sermons, free time, nighttime sermons—you get the picture. Earlier that morning, a senior had informed me that this would be the “cry night.” Oh, fun.

What followed was essentially a trauma-bonding circle in which vulnerable young women were encouraged to share their most shameful “sins” with no warning or preparation, many of those regarding “sexual immorality.”

I was incredibly uncomfortable. I found myself crying out of shock and felt a disturbing sense of faux-camaraderie. I had just met a lot of these girls, but we were expected to casually share our most vulnerable thoughts in a moment of intense emotional disorientation. After dozens shared their stories, I gently raised my hand and whispered through tears-

“I don’t think I believe in any of this anymore,” I said.

No one said anything.

In the weeks following the retreat, my phone became flooded with check-in texts along the lines of, “Hey girl! Wanna grab coffee?” It wasn’t until a few painfully awkward coffee dates that I realized that the intention was never to catch up or genuinely listen to my concerns. As it turns out, possibly losing a once-enthusiastic member is apparently very detrimental to an organization’s public image.

I had been on track to become a leader in this organization until COVID-19 entered our lives shortly after this retreat. In the beginning, I was eager to do so, holding a general desire to connect with people and learn more about Christianity. But as I was repeatedly told that my sole purpose on this earth was to “spread the Gospel,” I began to question more seriously the credibility of this organization and my lifelong system of belief entirely. It seemed as if my personal faith in God and outward religious involvement had started to crumble at exactly the same time, leaving me feeling incredibly confused, alone and afraid. Struggling to find my footing, I lived in a perpetual state of freefalling; I eventually got used to it.

As much as I might hate to admit it, the emergence of COVID-19 finally gave me a reason to back away from this organization. I had repeatedly been pressured into believing that if I didn’t attempt to convert students in Starbucks, then there was something wrong with me. The leaders had created such a strong tribal mentality that assured support from inside a tightly sealed bubble, making it hard for people—like me—to leave. All of my personal beliefs had to align with those of the organization, or else I was just a lukewarm Christian with the devil in my head. When times were tough, would I actually stand up for my faith?

I don’t identify as a Christian anymore, and I proudly live my life a lot differently these days. I cuss, I don’t date to marry, and I fully support and accept the LGBTQ+ community. I take what makes sense to me from various religious teachings and discard the rest without feeling guilty. I think Jesus had some pretty cool ideas, but I don’t think he rose from the dead or has anything to do with why we’re all here today. And thankfully, my life without religion has been incredibly fulfilling, beautiful and valuable. I hold a newfound faith in humanity and the universe, and accept people for who they are, in whatever form they present themselves. Religion simply no longer added value or peace to my life, so it was time to let it go entirely.

“I will not stay, not ever again—in a room or conversation or relationship or institution that requires me to abandon myself.”