REVIEW: ‘Reacher’ is better this time around, even without Tom Cruise 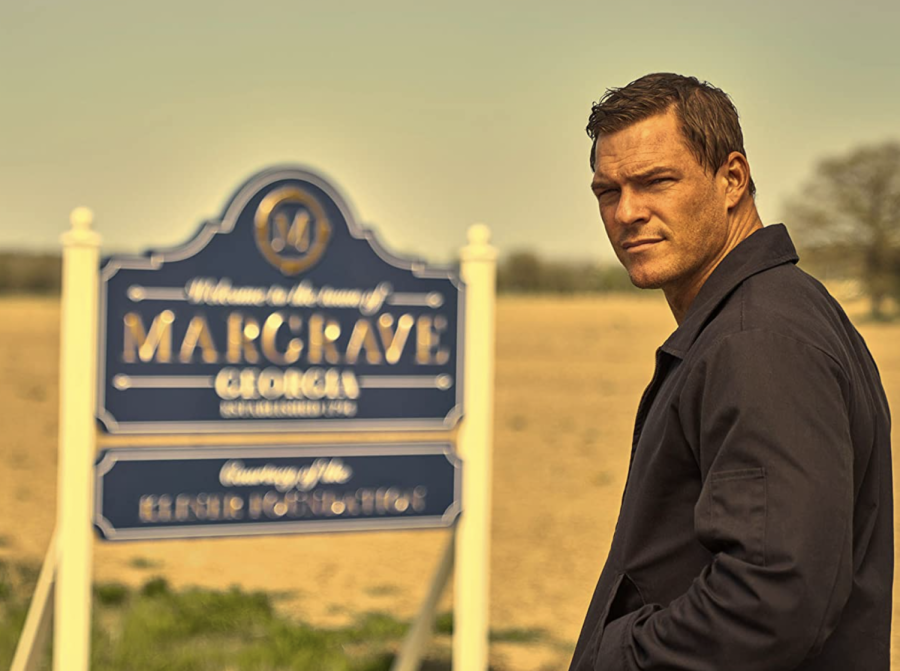 Alan Ritchson in Welcome to The Margrave (Reacher 2022).

“Reacher,” Amazon Prime Video’s latest TV series is based on the long-running Jack Reacher novel series by British author Lee Child. “Reacher” is not the first live-action adaptation of the character, as Tom Cruise previously starred as him in the films “Jack Reacher” and “Jack Reacher: Never Go Back.” While the films were thrilling adaptations of later novels, the eight-episode season is based on the first Reacher story “Killing Floor.” The films were entertaining in their own right, but season one of “Reacher” is a faithful adaptation that acts as a strong entry point into the Jack Reacher franchise and a tightly-knit crime thriller.

The premise of the book series revolves around Jack Reacher, a former U.S. Army Policeman who wanders the United States and becomes embroiled in several conspiracies. Reacher is a drifter who travels with minimal items and most of his past is unknown to others. Despite his anonymity-based lifestyle, and occasional reluctance, Reacher is driven by his determination to help those in need when the time calls for it. Reacher’s intelligence and fearlessness is topped off by an imposing physical build, as he stands at 6 feet 5 inches tall and 250 pounds, and his brutal yet fast hand-to-hand combat proficiency.

In the Amazon series, Reacher (Alan Ritchson) visits the rural town of Margrave, Georgia. Just minutes after arriving, Reacher is arrested by the local police department for a murder that took place the night before. Reacher is able to prove his innocence early on, but he soon discovers a personal connection to the criminal conspiracy involving the murder he was framed for. On a violent warpath, Reacher teams up with Chief Detective Oscar Finlay (Malcolm Goodwin) and Officer Roscoe Conklin (Willa Fitzgerald) to bring justice to the victim and vengeance to the conspirators.

The series does well in capturing the mystique around the Reacher character. Reacher is a compelling lead who displays violent tendencies, deductive skills and a hardened conscience. However, the series recognizes that he is far from the typical sleuth archetype. While the Cruise films were able to capture Reacher’s resourceful thinking and his machismo, albeit not physically, Cruise’s star power cast a shadow over the character. As Cruise plays his share of badass characters in films like “Collateral” and the “Mission: Impossible” series, it is hard to distinguish Cruise’s Reacher as not being just another one of his typecast roles. It is also harder to connect with the films’ Reacher, as they’re based on the ninth and eighteenth books in the series, and we do not get much of his backstory or any personal stakes as a result.

Making “Killing Floor” the basis for season one of “Reacher” is the best decision for new fans. Not only because “Killing Floor” is the character’s introduction, but we get to understand what makes Reacher tick, details of his childhood and a straightforward yet intriguing crime story that shows his trademark attributes. The show’s faithfulness is something that longtime fans of the books can appreciate. Cruise did a good job at playing an older Reacher, but at 5-foot-7-inches with dark hair, he is a departure from Child’s physical description in the books. Ritchson, who is 6 feet 2 inches tall with light brown hair, more closely resembles the Reacher from the books. Ritchson inhabits the character’s brutality, snarkiness, wit and heroism that hooks us in right away.

While the show is a superb adaptation of the character from the novels, it does suffer from a few cliches. There are times in the series where Reacher conveniently finds clues or dodges deadly encounters in ways that are unrealistic or overblown. Given Reacher’s sheer strength and detection skills, he was written to be an unstoppable hero. However, a flaw from this is that it never seems like he’s in any real danger. We see him take on multiple opponents with ease in a prison fight where he gouges one man’s eye and breaks the bones of a few more. We also get a predictable romance between Reacher and Roscoe that is almost a staple of any crime thriller featuring main characters of the opposite sex. Character archetypes also include a corrupt town official, a shady businessman, resilient but unsuccessful assassins and the uncompromising detective.

In both the novels and adaptations, Reacher’s characterization largely adds weight and intrigue to the storyline. Though the character can be “Marty Stu”-esque, the show improves upon what came before. Whereas Cruise’s portrayal seems more like a caricature of an action hero, Ritchson feels more authentic. Ritchson injects the occasional humor, brutal honesty and seriousness of the character while also showing him as a man with regrets. Essentially, Reacher’s portrayal is something that easily makes or breaks the show. In this case, Ritchson delivers an enthralling performance that carries the show. Given that the character has been featured in more than 20 novels and short stories, each story may tend to feel repetitive or dry at some points. However, as “Reacher” adapts the first novel, and assuming that other books are adapted for future seasons, we are very far from suffering Reacher fatigue anytime soon.

“Reacher” season one almost functions like an eight-hour movie. It pulls us in with a compelling character and an uncomplicated premise that is accessible for anyone to follow. The show can be summed up as comfort TV for us. It does not have overly complex plots, filler episodes or any overextending social commentary. Instead we get bone-crunching action, strong character beats, nuances into each character and a plotline that we get invested in. Like its source material, it tells a standalone mystery with a clear conclusion and resolved plotlines that make it easy for anyone to sit down and binge watch in a day. The door is also left open for more seasons that adapt any of the original novels.

Ritchson is a charismatic series lead who leaves us wanting to see more of his performance in “Reacher.” As John Krasinski did for “Jack Ryan” or Titus Welliver in “Bosch,” Ritchson makes the Reacher role his own as he displays the strongest facets of the character. He adopts the character’s unwavering steeliness as he faces off with several adversaries, and we can sense his inner warmth as he interacts with some of the townspeople about trivial things such as Jazz. He gains the edge over Cruise as he gets the opportunity to develop Reacher’s brutish energy and dry wit. Circumstances of the plot even allow him to display the character’s inner turmoil as he seeks out justice for a personal tragedy that hangs over his head for most of the series. Whenever Ritchson is onscreen, we can already envision a memorable quote or fight scene that will cement Reacher into our minds as a magnetic character we want more of.

“Reacher” is a faithful adaptation of Jack Reacher from Child’s long-running book series. The show is a solid thriller that acts as a great entryway into the character, which is further enhanced by Ritchson’s portrayal. For anyone looking for more action, thrills or likable heroes from television, “Reacher” is a Prime show that has it all.