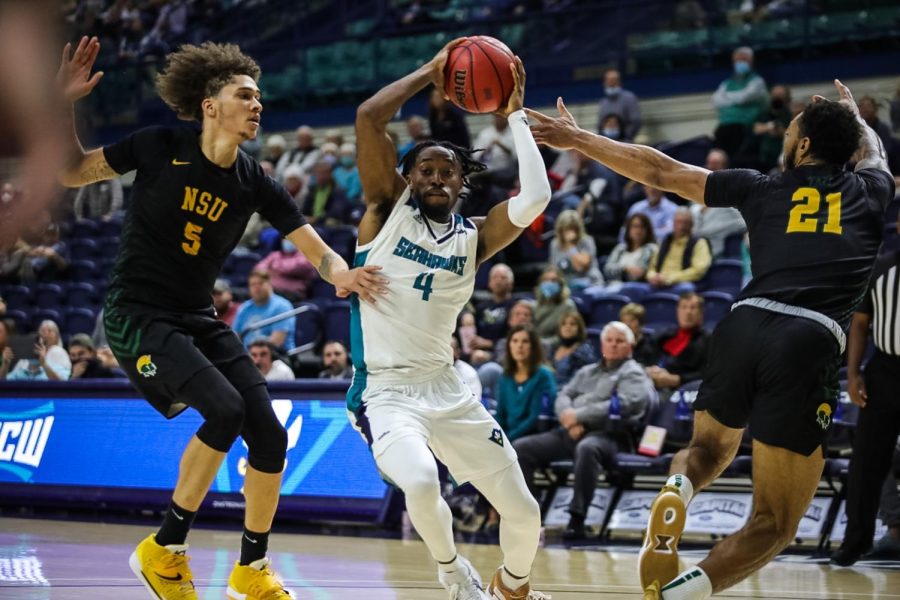 Mike Okauru driving to the basket in UNCW's matchup with Norfolk State on Dec. 1, 2021 inside Trask Coliseum (Davis Kirk)

BOSTON, Massachusetts – As if UNCW’s ninth consecutive win Monday night was not remarkable enough, Head Coach Takayo Siddle proved to everyone why this team will hold a special place in the hearts of Seahawks fans for years to come.

Siddle spent nearly half of his postgame interview with Mike Vaccaro thanking every single person involved with UNCW men’s basketball. Whether it was the starting five, or the athletic trainer, Siddle made sure to give credit where it was due.

“You don’t go and win four straight games on the road if you don’t have great character kids,” Siddle said in his postgame interview. “These guys are special humans. They are connected like a family and are tough … everybody has contributed to this team’s success. I am extremely proud of them.”

Once again, the Seahawks (12-5, 6-0 Colonial Athletic Association) found themselves behind midway through the first half, but like they have done so many times this season, found a way to battle back.

Rallying from Monday’s 12-point deficit marks the fourth comeback of at least 10 points in five games this season.

“I could tell they were fatigued, beat up, and sore,” Siddle said. “But we had to gut that one out and that’s exactly what we did.”

‘Toughness’ has been the word to describe this team all year and the players, as well as the coaches, have certainly lived up to its meaning. Time after time UNCW has been asked to answer the bell and has repeatedly done just that.

“We couldn’t do it without everybody,” Siddle said. “It was a lot of work with a lot of sleepless nights … but just so blessed to have everybody be a part of this family.”

For the first time in over two weeks, UNCW will return to Port City for a home contest against Northeastern on Jan. 27 at 7 p.m.

Streaming options are available on FloSports.com. Tune into 95.9 The Breeze and follow @uncwmenshoops on Twitter for highlights and live score updates.