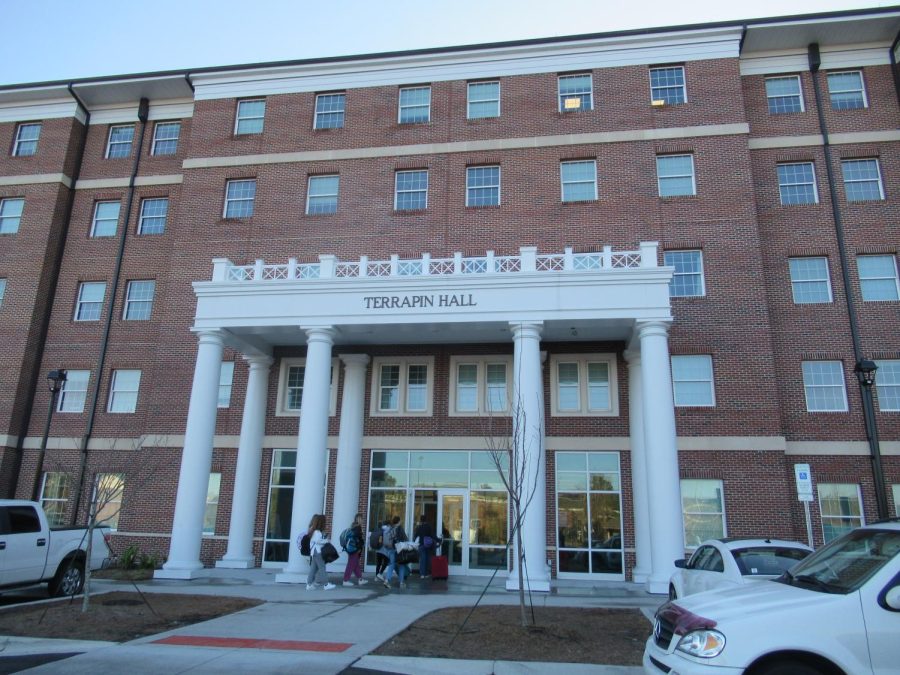 Over 400 students were evacuated out of Terrapin Hall last night beginning at 10:30 p.m. due to a pipe burst in the building, causing significant damage to at least 16 students’ residences.

The evacuated students were placed in temporary housing for the night. This afternoon, most students were notified the building passed safety assessments and they could return to their rooms at 2 p.m. via an email from UNCW Housing and Residence Life Director Kevin Meaney. However, the rooms of 16 students are in need of repair before the students can move back in. The scheduled repair will take place in one to two weeks, and until then these students will remain in temporary housing.

Sophomore Eriq Dixon was in bed on the fifth floor of the hall when the fire alarms went off.

“I heard the alarm and knew it wasn’t a drill. It was too late for a drill. I grabbed my phone, and wallet in case it was a fire. I wanted to at least have those with me, I was thinking that I’m going to be fine, but I’m going to lose so much if the things in my room were damaged,” said Dixon.

After the alarm went off Dixon remained outside of the building with other residents, waiting for information about where they could expect to spend the remainder of the evening. He was not placed into Seahawk Village for temporary housing until 4:30 a.m.

One of the apartment residents Dixon spent the early morning hours with, junior Andrew McLawhorn, explained that he received information about the situation in Terrapin Hall and was not worried about doing his part to help displaced people.

“I did not have any concerns about having someone needing to temporarily live in our apartment until their space is cleaned. I didn’t even hear the individual come in this morning,” said McLawhorn.

Dixon maintained a positive outlook on the situation.

“It could have been a lot worse, I was very fortunate, the circumstances were beyond our control and we just have to take the hand we’ve been dealt,” Dixon said.

Sophomore Residential Assistant Carrick Berry was on duty when the pipe burst. Berry described the chain of events surrounding the initial notice of the flooding.

“I got a call from another RA on a lower floor explaining what happened and my boss was already on the phone with the fire department, then the alarm went off and it was a long night,” said Berry. Berry described the initial damage from the pipe in the first-floor kitchen, with ceiling tiles on the ground and about an inch of water on the kitchen floor.

When Berry returned to the hall on the afternoon of Jan. 24, the kitchen was blocked off with tape and the baseboards were stripped off the walls while attempts to vacuum up the water were made by members of Housing and Residence Life staff. “The situation is pretty crazy, but it is what it is and just a burst pipe, it could have been worse,” said Berry.

Sophomore and The Seahawk Assistant Culture Editor Abigail Celoria is a resident of the fifth floor of Terrapin Hall, who recounted her experience with the flooding.

“I only really realized it was an alarm when I opened the door to my room and I saw people headed toward the stairs,” said Celoria.

Celoria recalled the minimal information provided by the university in regards to the flood.

“We stood outside in the cold for a while, unsure of what was going on. I didn’t actually expect anything to be wrong—maybe someone had burned popcorn or something. We didn’t receive an update until around 2:40 a.m. that we could come back and grab our essentials, and those of us that didn’t have a place to stay would be relocated. The line was wrapped around the Loggerhead conference room. They provided sheets, pillows, and towels, which did help to soften the blow. Housing truly did all they could, but there’s no getting around the fact that it was a frustrating situation. I wasn’t able to fall asleep until 5 a.m. It was just crazy.” Celoria was placed into temporary housing in Seahawk Crossing for the morning.

Another resident of the fifth floor, sophomore Laura Wyatt recalled the disregard for COVID-19 policies during the haste to leave the building.

“I wasn’t necessarily worried about COVID, but I did think it was a little ridiculous that all rules about COVID went out the window and they were just okay with shoving us all together. I just wish they had given us a time frame and been better about updating us,” said Wyatt.

Some students, like Dixon, were just too tired to care after a long and trying night.

“I didn’t think about COVID-19 when going into someone else’s space, I was more worried about waking up the residents and just wanted a place to put my head down,” said Dixon.

The Seahawk will continue following this story and the long-term impacts this burst pipe will have upon residents of Terrapin Hall. If you have information or would like to share your experience, you can contact us at theseahawk@uncw.edu.