How UNCW MBB is proving the experts wrong 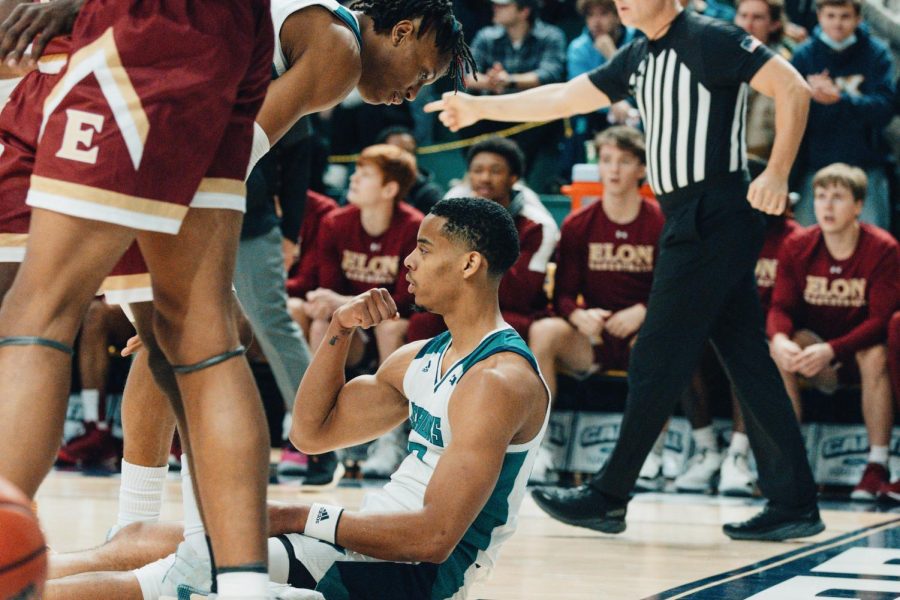 Jaylen Sims during UNCW's matchup with Elon on Jan. 12, 2022 at Trask Coliseum.

Three months ago, coaches and media members had UNCW men’s basketball finishing the 2021-22 season second to last in the Colonial Athletic Association (CAA).

Let’s just say things have not gone as planned.

After five consecutive wins, its longest streak since 2016-17, the Seahawks (8-5, 2-0 CAA) find themselves sitting near the top of the conference standings.

Improved team depth and veteran leadership from Jaylen Sims have given this team a boost and are big reasons for the Hawks’ success so far.

Ten of the 14 players on UNCW’s roster this season are newcomers. With an abundance of talent, Head Coach Takayo Siddle has a plethora of options when it comes to what lineup he wants to put on the floor.

Having a deep bench was not a luxury Siddle could rely on last season. However, so far in 2021-22, Siddle has used at least 10 players in eight of UNCW’s 13 games – a strategy that has benefited the second-year head coach’s fast-paced style of play.

Turn on the tape and it is easy to see the Hawks are at their best when pushing the tempo and scoring easy buckets after forced turnovers – which they do nearly eight times per game, ranking fourth in the conference.

When it comes to big, late-game moments, the Seahawks have an answer for that too.

Sims has been the guy for this team when it comes to crunch time and there have been plenty of opportunities for the senior to showcase his skills.

Nine of UNCW’s 13 games have been decided by single digits. Going 6-3 in those matchups is in large part thanks to Sims’ ability to make crucial shots and knowing when to find his teammates for easy buckets.

Of course, it is still relatively early in the season, but UNCW’s victory over preseason favorite Delaware and current win streak have undoubtedly raised a few eyebrows around the league.

“Conference play is always (tough),” Siddle said after UNCW’s 73-66 win over Elon (4-12, 1-2 CAA) Wednesday night. “We haven’t caught one of our opponents on a bad night yet … it’s always close games. Luckily we have been on the right side of those, and we are learning how to win those close games.”

Simply put, the Hawks are hot. And at just the right time.

An upcoming four-game road trip (Jan. 17-24) will be UNCW’s longest this season. In addition to overcoming opponents on the court, the Seahawks will face a familiar challenge off the court as well.

Already, UNCW has seen four of its games postponed due to COVID-19 protocols, as well as two cancellations back in November when a “flu outbreak” caused the team to withdraw from the Zootown Classic.

Staying healthy has been a challenge for every team the past couple of seasons and will certainly remain a primary focal point for the Hawks during this next stretch of games.

UNCW’s next matchup will come against Charleston on Jan. 17 at 7 p.m. Streaming options are available on FloSports.