After 40 years of contamination, lawsuit to save the Cape Fear? 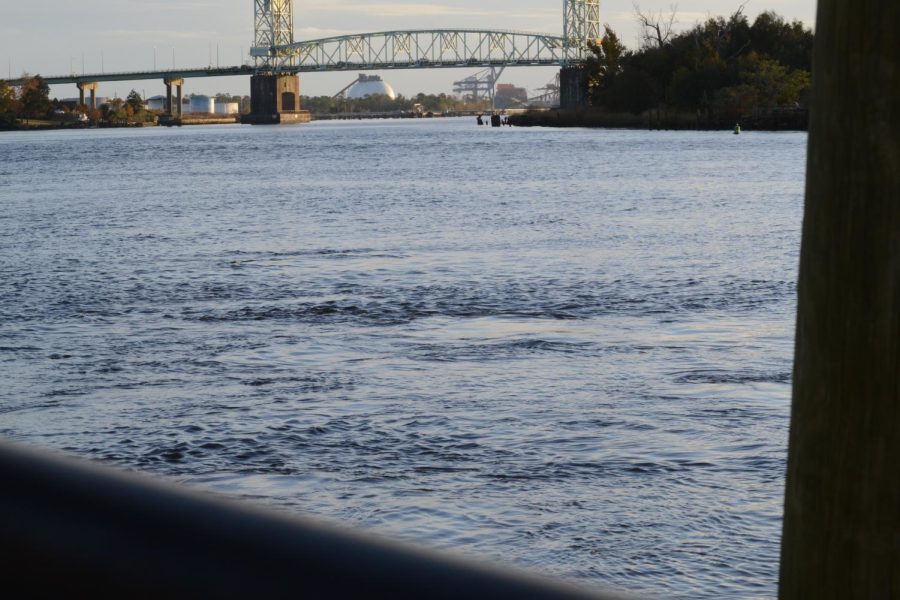 The bridge in the distance on the Cape Fear river.

PFAS, or polyfluoroalkyl substances, are chemicals that are common in materials used to make non-stick pans, carry out containers and stain-resistant furniture and carpets. GenX, a toxic chemical that the Chemours plant started producing in 2009, as well as companies Archroma and Arkema. These chemicals are considered dangerous because they are not soluble in water and do not have any naturally occurring properties that allow them to break down in the environment.

Dana Sargent, the executive director of Cape Fear River Watch, has led several outreach campaigns in relation to GenX, a type of PFAS and the health of the river.

“Residents of Wilmington and the surrounding areas should be concerned because a significant concentration of PFAS chemicals has been found in groundwater,” said Sargent. “PFAS chemicals are in the soil, in groundwater and well water and should be advised to be cautious.” The Department of Environmental Quality is now requiring Chemours to take responsibility for their role in PFAS contamination. They will be required to test the water in downstream communities and provide replacement drinking water supplies to residents. The Chemours Company is working closely with the DEQ and with residents to find solutions and temporary fixes to allow access to safe drinking water and restore the Cape Fear Rivers’ clean, flowing ecosystem.

“Cleanup will take time, but it is happening,” said Sargent. “The data of contaminated surface water is not here yet, but PFAS is continuously released into the water through Chemours, landfills, and the decomposition of takeout containers.” Cape Fear River Watch’s lawsuit and an ongoing study of the river itself shows the possibility of a promising future for the river; however, methods of cleaning the water are controversial. Kat Pohlman, the chief sustainability officer at UNCW, mentions a different approach to ensuring the possibility of clean water.

“[We should be] focusing our energy on preventing the contamination of drinking water through policy and regulation to promote change,” said Pohlman.

Reverse osmosis processes can filter out toxic chemicals by forcing water through a thin membrane that will trap contaminants and remove them from the water. A type of filter may include a cheesecloth or netting that contains small holes for the water to pass through.

“Depending on the system, reverse osmosis can use four to 20 gallons of water to create one gallon of clean drinking water,” said Pohlman.

Chemours has a history dealing with contamination allegations and lawsuits. The contamination began in the 1980s and has continued for 40 years.

When the contamination began, scientists did not know about the impact on human health until people on the banks of the river started getting sick, some with terminal illnesses. Many believe that their illnesses are directly related to consuming contaminated water although there are studies underway to prove this. When ingested into the human body PFAS can have an incredibly dangerous effect on hormone function. Locals are now suffering the health-related consequences including liver damage, thyroid issues, hormone suppression and cancer, that come with drinking the contaminated Cape Fear water. Traces of PFAS have been found in striped bass and alligators that call the river their home. In 2019, Cape Fear River Watch sued the North Carolina Department of Environmental Quality for not taking stronger and more effective action against the issue as well as Chemours for violating the Clean Water Act and the Toxic Substances Control Act.

That same year, attorneys at the Southern Environmental Law Center reached an agreement to require a significant change in the Chemours’ use of PFAS chemicals. With the hope of decreasing the concentration of chemicals released into the river. The company agreed to construct an in-ground barrier between their site and the river and install a filtration system in creeks around their plant to help limit the number of chemicals that exude into the river. They also pledged to treat stormwater to remove 99 percent of PFAS chemicals for additional safe drinking water. A correction plan was submitted to the Department of Environmental Quality by the company but failed to outline a specific plan of action that reversed the contamination and was therefore rejected by the DEQ in April of 2019. Chemours wrote up a plan to build a thermal oxidizer that destroys evidence of PFAS in the air. And tested nearby piping that could reach the groundwater. The DEQ said their plan was “deficient,” since the plan did not mention groundwater or surface water contamination. GenX was only a small amount of the chemicals that were released into the water. However, chemicals continued to seep into the groundwater, creeks and rivers through runoff.

In 2020, The Chemours Company announced they would voluntarily stop allowing the chemicals, including GenX and PFAS, to continue to leak into the water; however, this promise turned some heads from professionals who work to protect and maintain the environment and the river itself.

The deal reached between Cape Fear River Watch, The Department of Environmental Quality and Chemours was finalized in 2020. The plan was written by The Chemours Company and was edited and revised to take immediate and sustainable action against contamination. The deal addressed the contamination of the river and Chemours responsibility for contaminating the groundwater. The plan will outline specific goals and deadlines for Chemours to install additional filtration systems and treat the groundwater and surface water in order to eventually remove 99% of PFAS.