REVIEW: The original MCU Avenger gets his dues in the grounded Disney+ series ‘Hawkeye’ 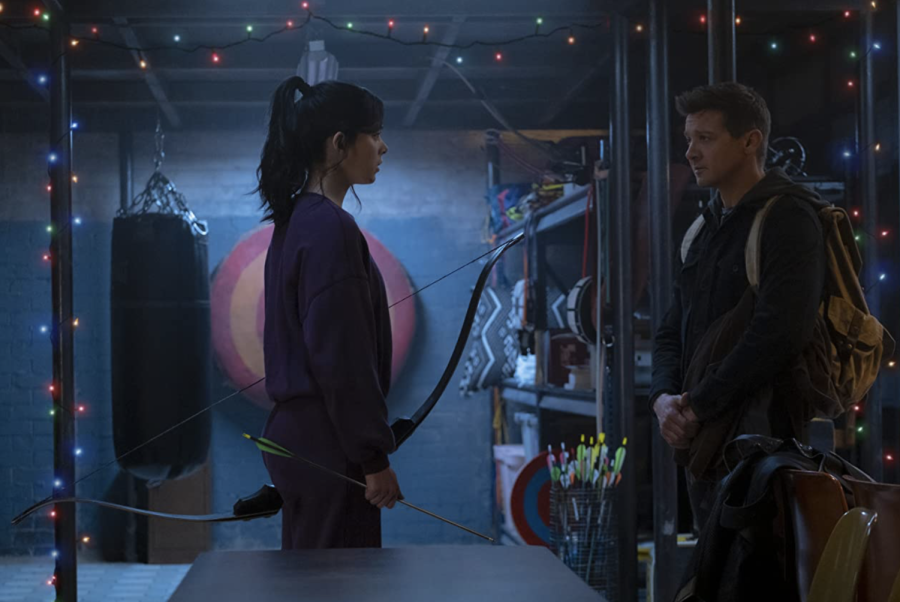 When the Avengers made their cinematic debut in 2012, only four of the heroes had their own solo films beforehand. After years of development in the Marvel Cinematic Universe, Black Widow and Hawkeye received their own solo adventures in 2021. When compared to the other original Avengers, the two characters can be considered more human and lower-tier in terms of power. This characterization works well in Hawkeye’s favor as the action-packed two-part premiere emphasizes his down-to-earth qualities.

Set one year after “Avengers: Endgame,” Clint Barton (Jeremy Renner) has momentarily stepped aside from being an Avenger to spend Christmas time with his family. While in New York with his children, Barton forces himself back into action when Hawkeye fan Kate Bishop (Hailee Steinfeld) uncovers a criminal conspiracy. This conspiracy ties into Barton’s past as the vengeful vigilante ‘Ronin,’ a moniker he took on in “Endgame” after his family disappeared from Thanos’ snap. With the Ronin’s enemies after Bishop, Barton must help her and confront new adversaries before he can join his family to celebrate Christmas.

The series gives more depth to Barton’s character than any of the films have done. “Age of Ultron” and “Endgame” introduced us to circumstances involving his family and these instances added a human element to the Avengers team, as well as a personal stake for the character. These elements seemed to only serve the story at the time, given that the films sought to cover many elements, but they pay off in the series from years of buildup for his character. The movies’ events build him up as a tragic character who is encumbered by the loss of those closest to him and his place in the Avengers. In the series, we see the effects of his past and his inability to cope with it while trying to adjust to current circumstances.

The series is not only a standalone venture for Barton, but also the setup for his legacy character for the MCU’s future. The legacy theme is carried across most films and shows post-Endgame, such as “Spider-Man: Far From Home,” “The Falcon and The Winter Soldier,” and “Black Widow.” In the same way that Peter Parker (Tom Holland) is meant to inherit Tony Stark’s (Robert Downey Jr.) role as a headliner for the MCU, Bishop will likely do the same for Barton. Bishop initially debuted in Marvel comics’ “Young Avengers” #1, which saw her as a civilian before she inherited the ‘Hawkeye’ role in issue #12 after Barton’s death. But Bishop later earned wide recognition from fans when she co-starred with Barton in “Hawkeye,” the 2012 comic book run from writer Matt Fraction and artist David Aja. The comic run highlighted the dynamic chemistry between Bishop and Barton while pitting them against dangerous odds and building upon the latter’s vulnerability. This specific run is a strong influence on the Disney+ series and points toward greater expansion for both Barton and Bishop.

The show’s premise carries intrigue, as we witness Barton getting involved in a conflict that does not have world-ending consequences, as of yet. The show’s grounded action is a great contrast to the feats we see Barton accomplish in the Avengers films. Whereas the films show him displaying expert marksmanship to pull off arrow shots from extreme distances and fighting otherworldly beings with minimal effort, he is forced to adapt to the new environment. One of the show’s memorable sequences so far involves him and Bishop in a face-off with the “Tracksuit Mafia,” where the thugs try to force the duo out by throwing molotovs at Bishop’s apartment. Barton catches a molotov and chucks it back out at the thugs, causing them to catch on fire, but to a humorous effect without any gruesome results. The series does not downplay Barton’s abilities, which makes it more interesting to see him face off with street-level foes as opposed to the super-enhanced enemies from the movies.

To balance out the action, there is a great dose of humor that encompasses the first few episodes. Many may think that the show’s grounded tone may mean that it falls in line with Marvel shows like “Daredevil” and “Punisher.” Hawkeye does in a sense, regarding scale and action, but it does not carry the same dark and gritty edge that became notable for those shows. Fraction and Aja’s comic book run carries the same lighthearted humor that adds to the show’s down-to-earth sensibilities. A comical gag in the two episodes revolves around Barton’s celebrity status. Most fans would agree that the other Avengers overshadow Barton in terms of popularity and the show confirms it within the world of the MCU. When we first see Barton in the show, he is with his children seeing an “Avengers” Broadway musical in which all the heroes are glamourized and his portrayal does not get the same enrichment as the others. Additionally, the banter between Barton and Bishop is adapted wonderfully as Renner’s rugged charisma pairs well with Steinfeld’s perennial charm. While the two are not together for most of the first episode, the second episode immediately signals that their chemistry will be a strong selling point for the six-episode series.

As such, Renner and Steinfeld are right on target in their characters’ portrayals. Renner adds further depth to the dark horse avenger as he is given the opportunity to make the role his own. Playing the character since 2011, Renner provides a balanced character portrayal in which we see several sides to his character played in the most natural fashion. We see a Barton who can go from heartwarming and family-oriented to serious and focused within seconds. Though Renner’s best moments come out when Barton is being a reluctant mentor to Bishop, Renner adds nuance and reminds audiences that Barton is not simply a hero, but a man plunged into overwhelming odds. On the other hand, Steinfeld portrays Bishop with a fierce but lighthearted quality that makes us become engaged with her character right from the get-go. Steinfeld is great casting for Bishop, given her lead roles in “Spider-Man: Into The Spiderverse” and “Bumblebee,” as she carries an incisive wit that compliments the character’s perceptiveness and hunger for justice. Together, the two performers make the best of their characters and encourage excitement for the rest of the series.

Disney+ has presented fans with shows that act as pivotal additions to the MCU canon, and “Hawkeye” is a strong debut that looks like it can add to the streaming services winning streak of Marvel shows. The grounded series continues Clint Barton’s story and prepares to pave the way for Kate Bishop’s future in the MCU.