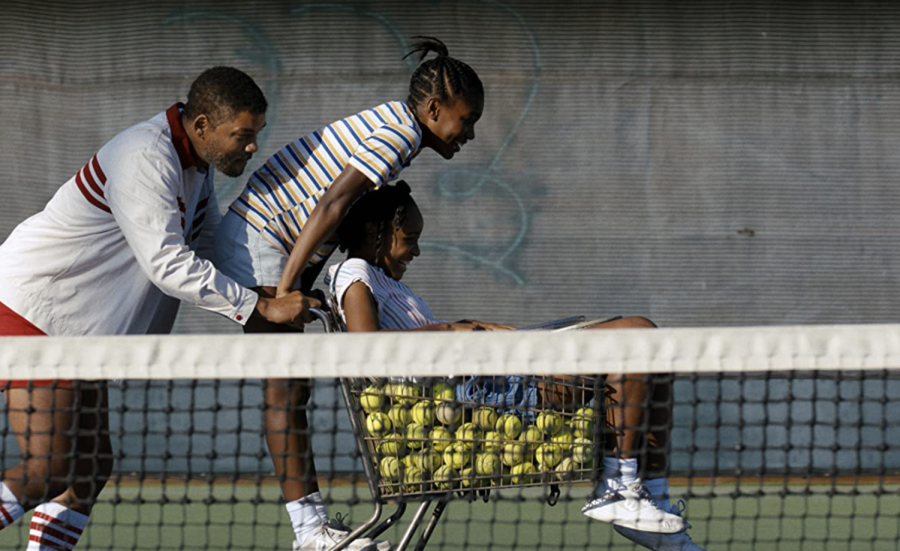 Will Smith, Saniyya Sidney, and Demi Singleton in “King Richard” (2021).

Sports biopics give us an introspective view into an athlete’s life, whether it be in their most triumphant moments or their most controversial. The latest sports biopic, “King Richard,” draws us in with the name recognition of tennis players Venus and Serena Williams. However, we are shown a personal story about the siblings’ father and coach Richard Williams. In an Oscar-worthy performance, Will Smith breathes nuance into the complex, but controversial father of the Williams sisters.

Williams is heavily criticized for the harsh training of his daughters and his controlling nature over their career trajectory. One of his more questionable acts is an 85-page guide he created for their life and sports career, which he had written before their birth. Although his methods were unconventional and are subject to moral debate, some might argue that his harshness ultimately contributed to their success as pro tennis players. The film does not villainize or glorify Williams, it highlights his passion and determination to secure the best opportunities for his daughters.

The film follows Richard Williams (Smith) as he raises Venus (Saniyya Sidney) and Serena Williams (Demi Singleton), alongside his three step-daughters, in ‘90s Compton, California. Williams adheres to his 85-page plan that he thinks will help his daughters become the best tennis players in America. Stubborn but optimistic, Williams pitches his plan to several coaches and gets rejected every step of the way, before he finally lands an opportunity for the girls to gain recognition. However, their success, both financially and professionally, conflicts with his desire for them to also have normal life as kids. Consequently, Williams must learn to set aside his own desires and principles for the sake of Venus and Serena’s futures.

In a sense, the film is an origin story for Venus and Serena’s success, which is attributed to their father’s actions. To understand Williams’ drive for greatness, we have to look back at the real-life figure’s past and how it forced him to be uncompromising. Williams grew up in the 40s’ and 50s’ where he encountered racism and survived multiple near-death experiences. At a young age, he witnessed a close friend being lynched, while another friend was run over by a white woman, who claimed his friend was at fault. While his past is not explicitly stated in the film, the dialogue alludes to such instances where he stayed headstrong in the face of racial conflict. Smith portrays Williams’ motivational drive with authenticity that helps us understand the character.

Because tennis was a predominantly white sport at the time, it is understandable why Williams would like to see his daughters be symbols of change for the sport. We see him try to instill his daughters with humbleness, fairness and respect for their opponents. When prospects like fame or victory enter the picture, it can transform nobility into arrogance, which threatens the skill and awareness that Williams teaches his daughters to adopt. At the same time, we can also see why he is wary of their acclaim because of how certain coaches or sponsors may seek to endorse them for simply being black, rather than recognizing their talent as tennis players. We see this play out when Williams calls out a tennis pro who notes their talent as being “incredible,” with the clear implication being that it is mostly noteworthy because of their race and background.

The film is fairly accurate to the real-life events surrounding Williams and the tennis duo’s road to success. Given that Venus and Serena Williams are executive producers for the film, we get a genuine family portrayal. However, some scenes heighten the impact of certain events for dramatic purposes. For instance, the film does not acknowledge that Isha Price (played by Danielle Lawson), the Williams’ half-sister, also participated in the family tennis practices. Her career as a tennis player never came to fruition however, due to a back injury. This omission from the film is something tennis fans may notice, but it does not fit into the film’s main focus on Venus and Serena. Including Price’s tennis aspirations could have easily led to an underdeveloped plot thread and would not have an emotional payoff like Venus and Serena’s.

Smith’s performance is a real attention-grabber in this film. Smith delivers a performance that is unlike any of his work in recent years. In films like “Gemini Man” and “Bad Boys for Life,” Smith seems as though he is portraying a version of himself with minimal effort involved. In this film, Smith gives a subdued, yet transformational performance as Williams. Smith alters his dialect and body movement, along with a display of athleticism, to match with Williams. For comparison, his performance here mirrors his role in “The Pursuit of Happiness.” In both films, Smith portrays a real-life figure who remains optimistic to overcome difficult odds for the sake of their children and their own welfare. Although Williams is a controversial figure, Smith’s performance convinces us to sympathize with Williams and recognize that he is an imperfect coach, but one who is capable of warmth and wants what he sees as best for his daughters. Smith’s performance is a subtle and fitting return to nuance after his recent set of action and comedy roles.

“King Richard” may simply read like a Venus and Serena biopic when we read the synopsis, but it is also a story of Richard Williams and his drive to see their potential come to fruition. While Williams’ training methods are questionable, the film gives us a closer look into why he is so outspoken and driven. Will Smith gives an enthralling performance that is one part of the film’s selling point, in addition to Serena and Venus Williams’ upbringing.