REVIEW: ‘Hellbender’ is a mystifying film about turning your back on heaven 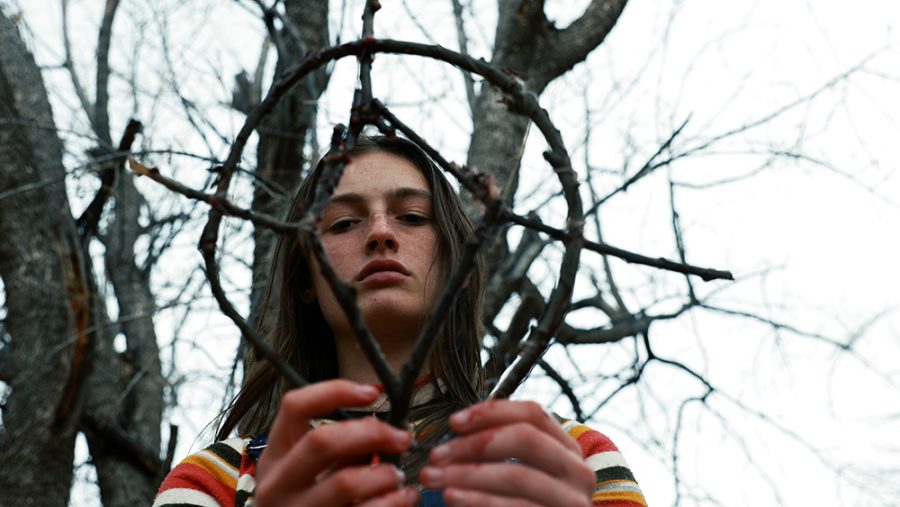 One of the things about the film “Hellbender,” the sixth film produced by Wonder Wheel Productions, that first catches people’s attention, is that it is directed, written and casted by the family duo of Zelda Adams and Toby Poser, with help and a guest appearance from Adams’ father, John Adams. This film follows 16-year-old Izzy, (Zelda Adams) and her mother (Toby Poser), who isolates her daughter while holding a secret that they are hellbenders, a type of witch. When asked how they pull this off as a family, Zelda said they’ve always, “raised me as an equal, and this is how it is when we film.” They also have a band appropriately named H6LLB6ND6R, which is featured heavily within the movie.

The movie progresses slowly, marked by silence and slow realization of what Izzy truly yearns for, as she has been kept away from humans her whole life and is now craving intimacy with her roots and true self. As any teenager would, she attempts to rebel against her mother and their secluded lifestyle by sneaking onto another person’s property with a newfound friend, Amber as well as some of Amber’s friends. After eating a worm in a cup of tequila as a dare, she begins to fall into a trance and almost becomes violent with her newfound friend. She realizes that her mother’s excuse for not being around people, a fatal illness, is not in fact real. Since the worm is an animal, it contains power and when eaten sends Izzy into a trance. This leads her to the realization that she is not human, but something else.

Her mother tells her that the reason that she fell into a trance when she first ate a worm is because the worm contained power, which awakened the hellbender inside her; everytime she eats something alive, or freshly dead, she experiences power flowing through her. Their demonic origins mean that they can accept power from other beings by eating them, including humans. They have come from hell, and therefore can wield these powers. Up until this point, she has froliced freely in the woods, but now she feels trapped—she must stay away from people, but now she craves those relationships and cannot have them because her mother says she’s dangerous.

She begins to dive into her and her mother’s identities as hellbenders, essentially demonic, or dark witches. They have the connection to the natural environment as witches, however, they have the powers of demons. They are said to have turned their backs on heaven and wield the powers of hell, therefore gaining the name hellbender. Over the course of the film, Izzy begins to learn the craft that her mother practices. She continues to develop her powers, almost surpassing her mother’s level of strength, feeding the fire inside her that wants her mother to fear her and hungers for more power.

One of the key themes in the movie is the cycle of life, marked by femininity, growth and reproduction. Their relationship can be extremely violent or calm at any given moment. They physically fight, spit blood in each other’s faces while laughing, cuss each other out and still share hugs, kisses on the forehead. Izzy’s mother often refers to many things as simply natural; when caracasses are found in the woods, she remarks that whatever did this was not wrong, or right for doing it, but simply natural. Everything must die at some point in the cycle and it is perfectly natural. The way hellbenders die is described by the mother in terms of the passing of seasons, “spring eats summer, summer eats fall, fall eats winter.” In other words, the mother hellbender is consumed by its offspring and the offspring begins the cycle again with its own child.

It is clear that the mother is desperate to avoid making Izzy a version of her own mother, who was violent towards humans and in her eyes a monster. However, it seems to be in Izzy’s nature to embody true power and complete disregard for human life, essentially embodying the monster her grandmother was. Her mother warns her, saying that her powers are not a gift but a curse, and in response Izzy asks her to reveal her true demonic self. In exposing themselves to each other, they experience true familial bonding, to their very core, whether this be the way her mother wanted, or not. They both realize that in the end, the daughter will eat the mother and take her place. The cycle will repeat itself again, in nature’s fashion. This is true not only of the characters in the movie, but is a metaphor for real life.

The film relies heavily on music from their own band, H6LLB6ND6R. Many scenes utilize graphics that twist, shake, change color and expose each of them in trances or dreams, slowly revealing their true nature to viewers and themselves. The overarching narrative of family, the relationship between mother and daughter, the cycle of nature and life and the power of death, fear and otherness leave lots to think about among viewers. The Adams’ family’s relationship dynamic plays out within the movie, making it all the more memorable.

The embracement of Izzy and her mother’s identities throughout the movie creates an ending sure to send shivers down viewers’ spines, truly reflecting on their relationships… and what will happen when the future finally consumes them and takes their place.