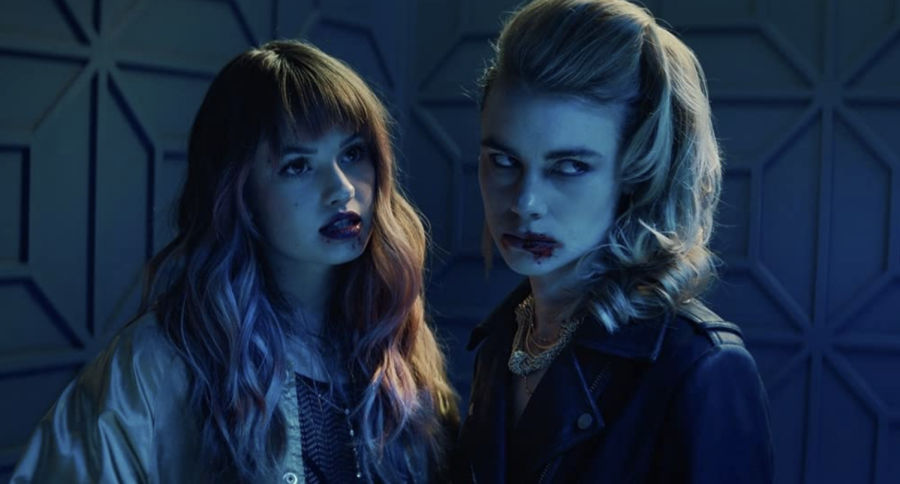 Vampire movies and shows have been made since almost the very beginning of cinema. You’d be hard-pressed to find someone who hasn’t seen at least one vampire film. The shaping of the modern film industry has been sculpted in part by these movies and the idea of a blood-sucking creature has not exactly been easily retired. “Night Teeth” uses the same premise: the divide between humans and vampires; however, it puts a spin on the trope that appeals to a modern audience.

The scene opens on Benny, played by Jorge Lendeborg Jr., a young man balancing school, musical aspirations and being the butt of the joke in his classes. It’s clear he’s hopeful for the future and just waiting for his big break. He has little knowledge of the underworld in his city, or the part his brother plays that will draw him in. He’s cliché, but alluring in obvious ways: he’s smart, a little naive, physically attractive and slightly socially awkward.

As the movie progresses, we come to learn that a truce, unknown to Benny, has been upheld for years: the rules are that humans are not allowed to know vampires exist, vampires must not feed on the unwilling and they absolutely cannot enter Boyle Heights, Los Angeles, without permission. Clearly this has become too much to take for the largest human mob boss in the city, who sets in motion a plan to kill the other four bosses in town. He attacks Benny’s brother, Jay (Raul Castillo), using Jay’s girlfriend (Ash Santos) as leverage. Jay is the human boss in town, which makes him and his entire family a target. When this attack happens, it alerts everyone that something is up, since the Boyle Heights rule has been broken—a vampire has entered.

Because of this, Jay cannot perform his job as chauffeur that night, so Benny ends up being the one to pick up two women in the place of his brother. The two women, Blaire and Zoe (actresses Debby Ryan and Lucy Fry) end up being the minions of the largest vampire boss in the city, looking to kill Jay. When they realize it’s not really Jay picking them up Benny is forced to tag along on their murderous escapade as their not-so-devoted driver. He begins to balance being thrown into the underworld, surviving, maintaining his sense of self and sanity and simultaneously flirting with Blaire, one of the vampire women he is chauffeuring. There’s a constant phrase, “I bet you give good blood,” as if they are always on the edge of killing him, but never quite touch him.

The movie is scarily predictable, with foreshadowing that gives away the plot immediately. Benny and Blaire have romantic tension from the moment they meet and it only progresses. This being one of the main parts of the movie takes away from any more complicated or intellectual portion that might exist, but it provides an attractive focus point during viewing. The bubbly feeling of watching romance seems to overtake any sort of deeper meaning that a viewer might search for while watching.

While Benny is pinned as the protagonist, the two women seem to be intended for more complicated roles, however their personas are both confusing and simple at the same time. A combination of sexual allure and cold-heartedness draws viewers in. Both have a sort of reckless air, however they still seem to have basic feelings. This being said, they still don’t seem to have any rational fears, as one would have when someone is trying to kill you. Only when one of them has an actual crossbow inside her do they show any type of fear and even then it’s nonchalant and passes quickly. Finding a deeper meaning in the movie as a whole is difficult: it’s happy-go-lucky, a narrative that stands as only a narrative. As Owen Gleiberman states in his article for Variety, “It’s indifferently told, with the air of a glum ‘action’ crime film, though the real problem is that ‘Night Teeth’ has no metaphor.”

Though this may be true for many viewers, this does not take away from the current popularity of the film. It still draws viewers in with attractive actors and captivating cinematography paired with upbeat music. This makes the film amazing for any viewer that wishes to sit back and relax, without needing to put any thought into the plot or its deeper meaning as it relates to everyday life. It seems to simply stand as a typical vampire film, with a few modern twists to make it relevant and entertaining to a new generation of viewers. The guest appearances of Megan Fox and Sydney Sweeney show the intention of catering to a certain, younger audience.

“Night Teeth” may not be on par with movies of the century, or even of the year, but it is still of value: all that is needed to lure audiences in is a mention of a good time, some exciting fight scenes and romantic tension. The movie seems to cater itself towards those with the simple goal of being viewers and for this it serves its purpose. Deeper meaning is not necessary for an enjoyable experience. Maybe putting your mind into something simple is just what viewers have been waiting for.