SGA Vice President Thomas Wilson shares what is in his bookbag 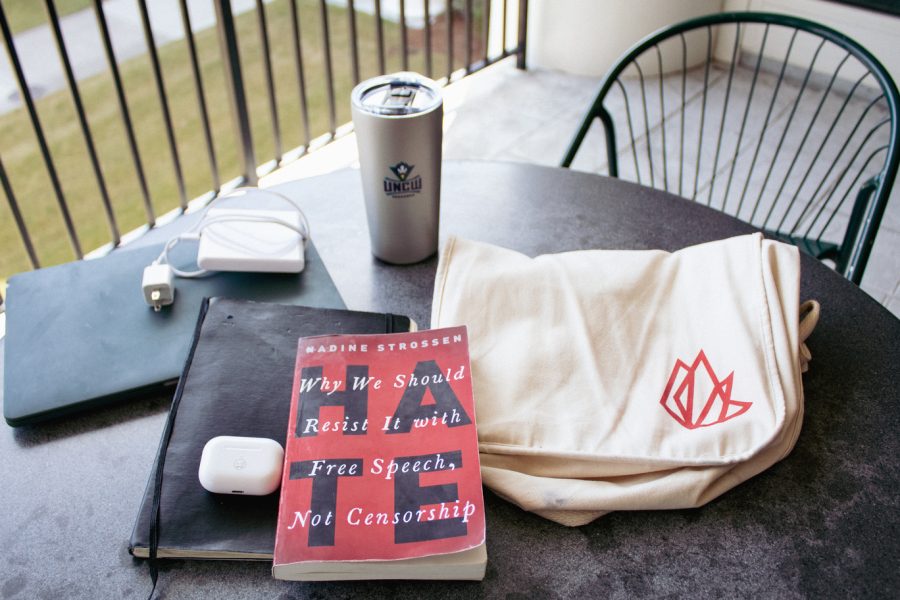 Student Body Vice President Thomas Wilson gave The Seahawk a tour of his tote bag. Find out why he prefers a tote bag to a backpack and his campus ride or die below.

“I like the freedom [of having a tote bag], the ability to just pick it up and go. I feel like with a backpack if it doesn’t fit right, it can hurt your back, it’s clunky. This is a little more fashionable and I like the versatility of one big open hole, versus multiple pockets.”

“HATE: Why We Should Resist it With Free Speech, Not Censorship” by Nadine Strossen

The book focuses on how to address hate speech in society, the reasons why censorship can backfire and the protections provided to the American public under the First Amendment.

“People are going to say hateful things regardless, isn’t it better to hear it and know those people and know their true intentions, rather than have that censored in anyway?” Wilson said.

Complete with an engraving of his favorite emoji.

“That is an emoji that I use a lot! More than the laughing-crying emoji. It was between that and a snake, because I like snakes.”

“It’s like my brain dump. I’ve had it since freshman year, it has a whole bunch of just random stuff in it. I have questions I need to ask people, an insane to-do list, I have every sticker that I’ve had for parking on campus. I don’t know why I kept them, but I have them all. In the back I have every place I’ve lived in college and little inspirational quotes. It’s my ride or die.”

“I am a fiend for Diet Coke. Like insane. If I get stressed, I crave it. I will take my own cup down to Panda Express or Einstein’s so that I’m not using the non-reusable cups and treat myself.”

His sticker collection dating back to his freshman year is on his mini-fridge.

“I’ve had the same phone since [my] senior year of high school. It’s either a 7 Plus, or an 8 Plus.” Although, the phone is not without its short comings. It no longer charges through the charging port so Wilson is reduced to bringing a wireless charger everywhere.

“I woke up to the smell of burning plastic one morning when I had it plugged in and I pulled out the charger and it was black. So, I used another charger, and it charged for thirty seconds and then the same thing happened. That’s fine now. I’m a fire hazard.”

“The phone still works. I’m not one to waste.”