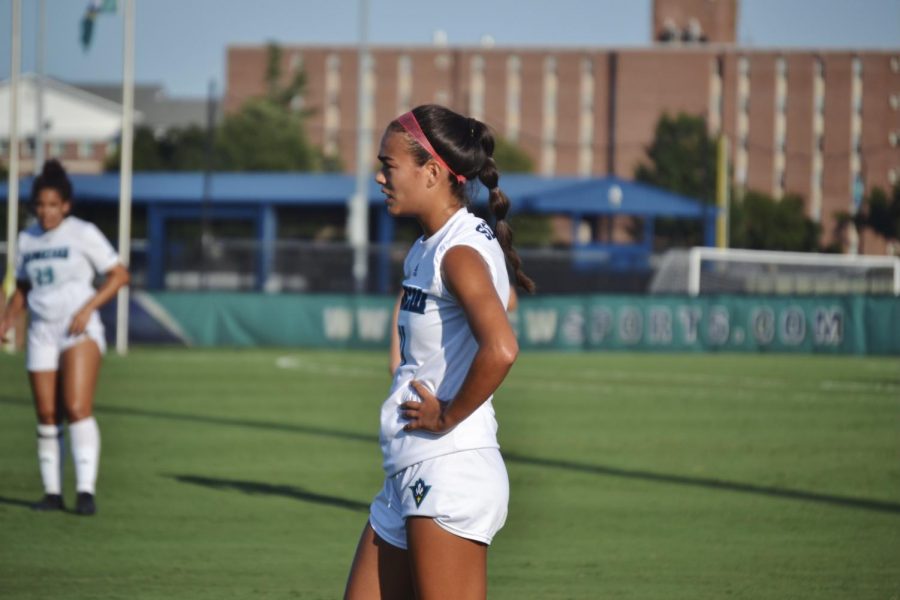 WILMINGTON, North Carolina – Jordan Faveri netted her fourth goal of the season Sunday afternoon in as many games to kick off the 2021 season.

“I have to give partial credit of my ‘hot start’ to the rest of my team,” Faveri said. “The majority of my goals have been ‘right place, right time moments’ and I have been lucky enough to recognize my position and put the ball in the back of the net.”

Going into Sunday’s match against UNC Charlotte, Stephanie Rose had been the only UNCW soccer player to score a goal in four or more consecutive games. Rose accomplished the feat in 2012 after scoring a goal in five consecutive outings.

“I also believe that these goals have rooted from a lot of dedication to improvement over the summer and an increase in self-confidence,” Faveri said. “Now that I am an upperclassman on a predominantly young team, I’ve had the opportunity to step up as a leader. I strongly believe in leading by example and positivity, so I think that outlook has unconsciously boosted my confidence and performance on the field.”

Faveri, a junior forward, was a key part of the Seahawks’ successful 2020 campaign that fell just short in the CAA Championship. Now, returning to a UNCW squad welcoming 12 newcomers in 2021, Faveri’s expectations for herself and her team have remained the same.

“The main goal is always to win the CAA Championship,” Faveri said. “Our team has been really focusing on winning the championship every day in practice which includes always giving 100% on the field, taking time to recognize when we need to recover, and having a sense of togetherness with everything we do.”

UNCW (4-1-1) has started the season strong and is currently riding a four-game win streak. Despite recent hurdles, Faveri and UNCW women’s soccer has only used those hurdles to become a better and stronger team.

“There is no doubt that this [2021] team has special qualities,” Faveri said. “Last year we had a tough loss in the finals of the CAA tournament which really lit a fire within our team to strive for the number one spot. That defeat along with the challenges with the pandemic really bonded the returning girls from last year.”

The Seahawks were ranked 10th in the most recent United Soccer Coaches East Region Poll and currently place second in the CAA. UNCW’s quest for a number one seed come tournament time trails only Hofstra (8-1-0), who sits alone atop the conference.

“We know what a championship entails, and we know where to put in the extra work to get the ring this season,” Faveri said. “Coach Neal brought in an excellent group of Seahawks this year and I think this championship mindset has rubbed off on them quite well.”