OPINION: The Gaza crisis shows that it’s time to stop glorifying your country at the expense of others 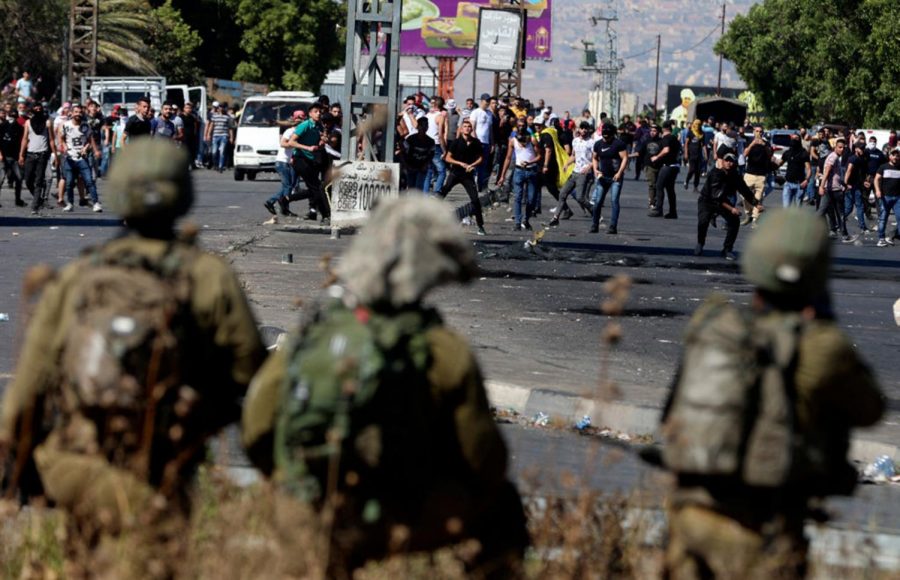 Palestinian protesters clash with Israeli security forces at the Hawara checkpoint south of Nablus city, in the occupied West Bank, on May 18, 2021. - Palestinians across the West Bank and in east Jerusalem and Arab districts in Israel were largely adhering to a general strike called in support of those under bombardment in Gaza, which led to violent clashes throughout the territories.

Another year, another deadly assault on the Palestinian-controlled Gaza Strip.

For nearly two weeks, the densely populated territory has been subject to indiscriminate rocket fire, leaving more than 200 residents dead and many more homeless. Families have been torn apart, and children are begging for help. A ceasefire was successfully brokered following an international outcry, but fighting could resume at any time with Gazans struggling to grieve another wave of loss and destruction.

The carnage, now the worst since the 50-day Israel-Gaza conflict war in 2014, started earlier this month after Israeli authorities initiated eviction proceedings against 13 Palestinian families residing in Arab-dominant East Jerusalem. Violent protests and riots ensued in the city, and in a matter of hours Gazan militant group Hamas began to launch missiles into Israel in defense of the Palestinians. The Jewish state returned fire, leading to yet another deadly conflict.

This senseless violence is another example of patriotism taken way too far. Idolization of the state was a key driving force behind humanity’s bloodiest conflicts, including both World Wars. More recently, right-wing nationalist leaders like former U.S. President Donald Trump nearly caused a further war with policies like imposing universal sanctions on Iran and escalating economic tensions with China. Both moves were harmful to innocent civilians within their target countries and did not help the U.S. in any way.

Furthermore, excessive pride in one’s country can lead otherwise tolerant citizens to become hateful of other ethnic groups. During the COVID-19 pandemic, for instance, when Trump made inflammatory comments like “China Virus,” anti-Asian hate crimes skyrocketed. He has faced widespread condemnation and now legal action for his behavior. But in the Jewish state, far-right Israeli loyalists are marching to stir up intense anti-Arab sentiment. To add insult to injury, local police are marching in solidarity with the extremists. That is not unexpected, though, because the police are close supporters of the Israeli government.

Israel’s authoritarian hateful atmosphere has been devastating for its Arab and especially its Palestinian populations. Checkpoints and other stiff restrictions have all but destroyed these populations’ freedom of movement, leaving them unable to migrate or even visit distant relatives. As a result, Palestinians struggle to make ends meet and face extremely high poverty rates, with roughly 30% living below the poverty line. The situation is particularly dire in Gaza, which has been formally blockaded since 2007. There, more than half of residents are facing poverty. In the end, major transnational organizations from Amnesty International to Human Rights Watch have formally declared Israel an apartheid state.

Making matters worse is the fact that Israel has several allies in the Western world, yet few decry its actions against Palestine. There is also a double standard. The countries tied to Israel are so because it was founded by Jewish migrants fleeing Europe following the Holocaust, one of the most egregious cases of state-sponsored hate. However, once the Israeli government became a perpetrator, rather than a victim, of such hate, its allies remained silent or staunchly defended its actions.

Among the Jewish state’s greatest contributors is the U.S., which has funneled out billions of taxpayer dollars annually to help maintain its defenses. The two countries have formed a very deep alliance, especially after the 9/11 terror attacks when fears of Islamic extremism and U.S. involvement in the Middle East both began to significantly increase.

But the U.S. has refused to scale back its aid even once Israel transformed from oppressed to oppressor. In fact, during this most recent massacre, President Joe Biden approved a $735 million sale of armaments and bombs to Israel, coming straight out of innocent taxpayers’ pockets.

Don’t get me wrong: Israel’s own citizenry is also innocent and should not be blamed for the atrocities in Palestine. They, too, deserve better than to live under a racist, warmongering regime. Besides, not all Gazan missiles are intercepted, and civilians within the Jewish state live in fear of death and destruction. Air-raid sirens frequently wail, and bomb shelters there are as necessary as tornado shelters are in Alabama. Trauma and mental-health issues are also widespread, especially in children.

But again, the Palestinians are firing these rockets because they are facing genocide and desperately trying to survive. It all goes back to the government and military of Israel suppressing Arabs’ human rights, as well as all governments who enable that behavior. In doing so, Israel and the other governments also violate Israeli citizens’ rights to live free from war and violence.

There are silver linings, though. In Western cities across the world, from New York to Paris to Melbourne, massive protests calling for the liberation of Palestine are in full swing. People who would otherwise be completely uninvolved in the situation are waking up and collectively standing up for Palestine. The solidarity is starkly similar to the worldwide anti-police brutality protests that followed the killing of unarmed Black man George Floyd at the hands of Minneapolis officers last year.

But activists for Palestine still have much work ahead, especially as their leaders continue to refuse to hold Israel accountable. In the end, the only real solution will be to abolish the concept of the state and stop dividing humanity. The United Nations must take charge of ruling the world and be prepared to swiftly hold powerful groups accountable for any violence. Then, military and weapons funding could be abolished and replaced with investments in infrastructure, development and reparations in previously-marginalized regions of the world. In other words, power to the people!