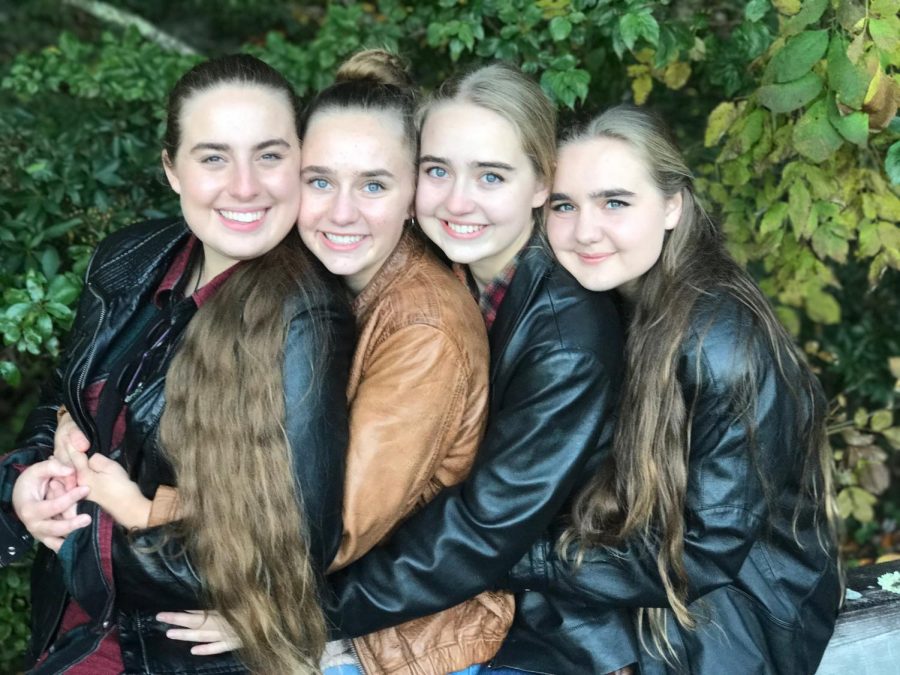 Pictured, from left, Serah Culler and her sisters Layla, Sophia, and Alexandra.

We’ve all heard the types of stories I’m getting ready to tell you. You hear it on the news about the family who just can’t make ends meet, or the girl in a terrible situation, but you never think that it can happen to you or someone close to you.

I am a freshman honors student here at the University of North Carolina at Wilmington. I make good grades, and I’m involved in a few student organizations. My sister and dad are also students here, and my other two sisters will be freshmen in the fall. These are some of the facts of my life, the clean and neat facts I share with others. But there are other, less pretty facts of my life as well.

For instance, my family and I are in an extremely difficult financial situation. My mother lost her job in April of 2020 and has had difficulty finding steady work since then. We live in a hotel and have lived here since last September after we were evicted from our home. We are currently on the brink of being evicted from here as well since we can’t afford to pay for the rooms. However, we should be protected and allowed to live here under a CDC moratorium.

This past month, I had to file charges against the general manager of this hotel—he was arrested and released. The police officer I spoke with called it an assault; the official court documents call it “communicating threats.”

I was not touched, hit or raped. And yet I have lived for weeks now with a cinch in my gut. I break down crying without warning. I lock and bolt my doors and double-check them throughout the day and night. The man who attacked me possesses a master key, which enables him to enter my room. I rarely eat without getting nauseous. I can’t focus on my schoolwork, and it’s difficult to believe that this will get better, or that in my future I will not always be afraid.

It breaks my heart knowing that some girls have had it worse than me. The girls who don’t have a family to support them, or who endured horrors that I hate to imagine. I lived in fear of this man for months before the attack but said nothing because I feared the consequences. For me, the consequences would have been jeopardizing my family’s already tenuous living situation. Many women face similar issues; they remain silent against someone they feel to be a danger to maintain a job, home, or relationship. My heart breaks over the fear and pain they suffer.

Right now, the district attorney is handling the criminal aspects of my case. But as of this moment, the man who attacked me can still come near me. His only restriction is to not “threaten the victim.” In North Carolina, that means he cannot touch me or say threatening things. But he can continue to intimidate me. He can continue to harass me. He can continue to be in my proximity and torment me, making my life a living hell.

There is something in North Carolina called a no-contact order. It’s a restraining order that a victim can file against a stalker or sexual harasser that they are not in a domestic relationship with. It is what I could file against my attacker to prevent him from being around me or my family and give me some peace of mind.

But there is a problem: it is a civil order. This means that I would have to face my attacker in court alone. I would also be facing the high-powered attorneys that work for his employer, Marriott International. I’m not prepared or strong enough to go up against a multi-billion–dollar corporation, or the franchisee, Aimbridge Hospitality, that runs this hotel, that I believe is implicit in terrorizing me. I can’t afford an attorney, and the state doesn’t provide one for something like this.

So, I have a simple choice: either take on my attacker and his attorneys in court alone or remain vulnerable to another, possibly worse attack from him. I don’t believe I should have to make that choice. Women and victims need better protection in the civil courts.

In a situation like this, I believe the courts should appoint an attorney to help women protect themselves. Right now, there is very little assistance and protection I can receive unless my attacker physically or sexually harms me. It is a travesty that I and others have to wait in fear to be damaged beyond repair or killed before the courts will step in. Laws need to be changed to give women, especially impoverished women, in difficult situations a better chance to keep further suffering from being inflicted on them.

I am not the only woman in North Carolina who has lived in fear of someone. I am also not the only one who dreads having to face their attacker in court. It is no secret that many women don’t come forward after they are harmed, or that they choose not to follow through with the charges.

The thought has gone through my head that I should just keep quiet about all of this. I was nervous to write this article; I feared, and still fear, the backlash that could come with making a public statement about what I have gone through.

But until enough voices speak up, change won’t happen. Until enough people realize the reality that many women face, things won’t get better. Ensuring that all women and victims have an attorney appointed to represent them won’t solve all the problems, not by a long shot. But I believe it could do a lot to help.