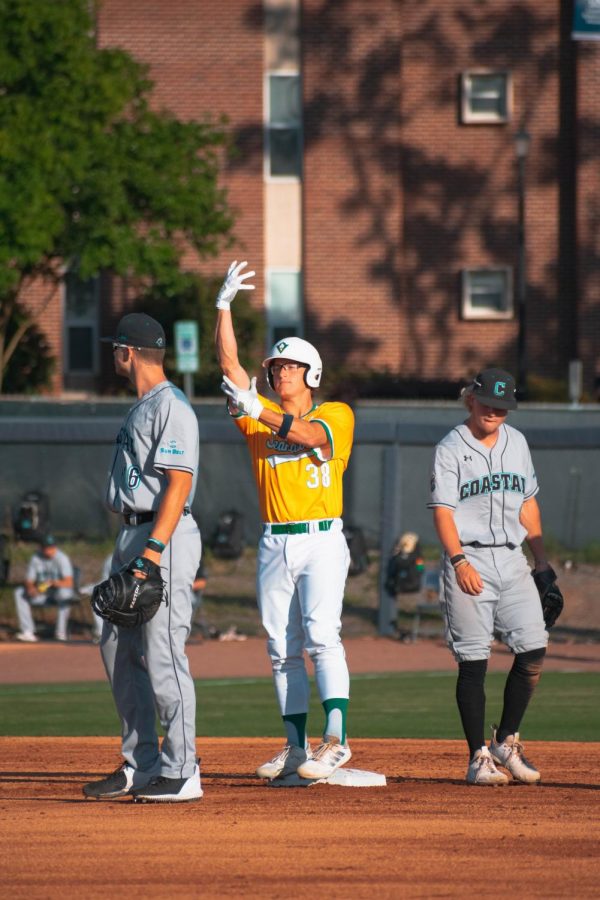 Zachary Bridges during UNCW's game with Coastal Carolina on Apr. 30, 2021 at Brooks Field.

Bridges made his first start behind the plate since Mar. 20 against William & Mary. The Benson native might have earned himself a little more playing time as the season progresses with the performance he had Wednesday night.

Bridges’ bat was not the only thing that brought life to Brooks Field on Wednesday night. The sharp strumming of guitar chords from AC/DC’s “You Shook Me All Night Long,” echoed throughout the ball park as the redshirt senior walked to the batter’s box every few innings.

“You can’t beat AC/DC,” Bridges said via social media after the game.

And right now, nobody can seem to beat the Hawks. The team is currently riding a three-game win streak after following up a 6-5 win over Elon with back-to-back victories over the Chanticleers.

“The way we played the last three games, that is the standard,” Bridges said. “That’s what all of us older guys know is the standard and we’ve just got to keep teaching it to our younger guys and realize we can play like that every game.”

The Seahawks will look to continue its winning streak this weekend when the team host William & Mary for a three-game series starting Apr. 30 at 6 p.m.