OPINION: The fear-driven pause of the Johnson and Johnson vaccine was a costly mistake 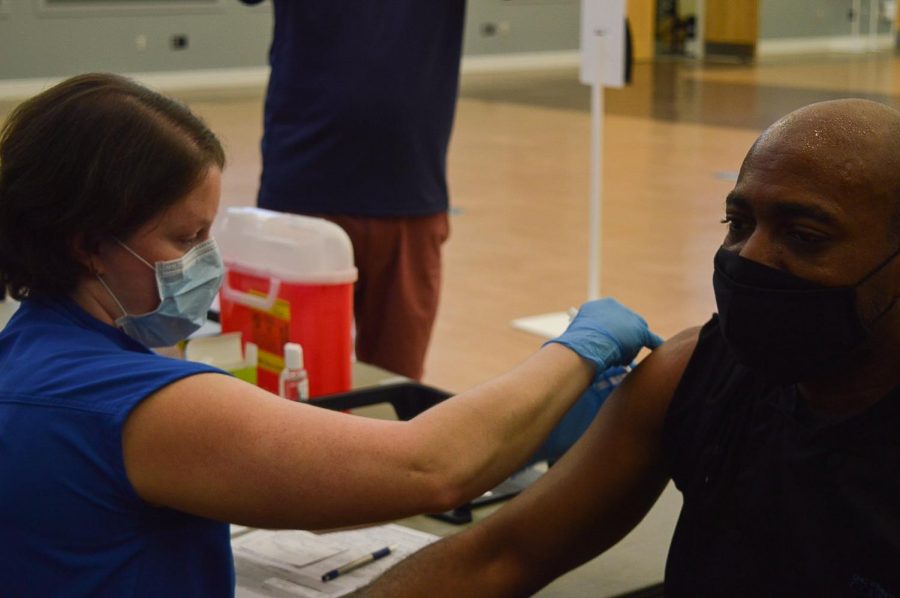 The Johnson & Johnson vaccine being administered in the UNCW Burney Center.

Public health authorities in the U.S. have committed a massive blunder by suddenly withholding from a desperate nation a lifesaving vaccine.

Last week, the FDA and CDC recommended a pause of the single-dose Johnson & Johnson vaccine following reports of blood clots in women who had just received the inoculation. All patients were between the ages of 18 and 48 and had presented symptoms six to 13 days after vaccination. Sadly, one woman died, and another is in critical condition at a hospital.

In accordance with official guidelines, UNC Wilmington (UNCW) paused its own dissemination of the Johnson & Johnson vaccine on April 13.

In the grand scheme of things, the decision to pause this vaccine is pseudoscientific and will backfire over the long term. More people will sit unprotected, and the world will remain a shooting gallery for COVID-19 for even longer.

Basic statistics and risk management make perhaps the most compelling case for the embattled Johnson & Johnson vaccine. Before the pause, nearly 7 million Americans received the shot, with only six reported cases of blood clotting. This amounts to a less than one-in-a-million chance. It is important to note, though, that each of these cases took six to 13 days after inoculation to show up, meaning that the real number could be slightly higher than six. However, that would only be true if the clots were definitively linked to the shot, which they are not as of the publication of this piece. Even if they were, the odds would remain astronomically low.

By contrast, natural infection with COVID-19 is proven to be linked to blood clots. A July study by the National Institutes for Health found that nearly 10% of patients hospitalized with the virus developed some form of blood clotting. Furthermore, CDC data indicates a 10% hospitalization rate for COVID-19 patients without underlying conditions and 40% for one or more conditions. Even a conservatively estimated hospitalization risk of 20%, henceforth, shows 1 in 50 patients overall developing blood clots, or approximately 20,000 times more likely than that of the Johnson & Johnson vaccine. To add insult to injury, there are other known COVID complications that are even more common, including heart damage and long-term breathing difficulties.

Pausing the Johnson & Johnson vaccine rollout will only enhance the risk of acquiring any of these problems, including blood clots, as the coronavirus will be given more time to spread freely before a degree of herd immunity can be achieved. The decision will prove particularly devastating to the U.S.’ younger and poorer population, who had been receiving the vaccine in distribution centers unable to accommodate or afford the deep freezers required to preserve the Pfizer and Moderna shots. Homeless Americans, who face a higher risk for severe COVID-19 both medically and economically, have been especially dependent on the single-shot vaccine.

Colleges will also bear a heavy burden for the hiatus. Here at UNCW, students have been receiving this vaccine since its March 26 FDA authorization. Campus inoculations are critical to resuming vibrant college life without masks or social distancing. As the university was preparing to launch its vaccination clinic and progressively open up eligibility to the campus community, Chancellor Jose Sartarelli pledged much more normal, if not completely normal, operations for the fall 2021 semester. But now that the university is not directly vaccinating any students at this time, many will be forced to seek out their shots elsewhere, especially as the days of the current semester are numbered. This could pose a major setback for underprivileged students or those with vaccine-resistant parents and ultimately the ability of the campus community to achieve herd immunity.

Speaking of vaccine resistance, the pause of the Johnson & Johnson vaccine threatens to make undecided Americans less likely get inoculated. In Europe, as AstraZeneca’s shot was becoming widely available, reports of blood clots generated similar panic. Despite lower vaccination rates than the U.S. and a third severe surge in COVID-19 cases, many governments in Europe bowed to the hysteria and paused their collective journey to recovery. Polling from YouGov indicates sharp declines in acceptance of the AstraZeneca vaccine across five European countries assessed, with all countries but the U.K. agreeing the shot is “unsafe.”

In spite of the dire consequences of suspending a COVID-19 vaccine, U.S. authorities did it anyway. Even Dr. Anthony Fauci, the chief medical advisor to the president and one of the most crucial voices throughout the pandemic, attempted to mount a defense. He envisioned wary Americans thinking to themselves, “Boy those people there are looking at that very carefully, and when they say something is safe you can believe it’s safe.”

But just as history promised, that argument failed miserably. A YouGov survey taken after the pause of the Johnson & Johnson vaccine found that just 32% of Americans deemed it “safe,” a drastic decline from 57% before. Clearly, the U.S. government failed to learn from Europe’s blunder, and in turn, the American people will needlessly suffer.

In spite of the bleak polling numbers, the hiatus has managed to generate bipartisan backlash. Prominent voices of the hard left, radical right and everywhere in between have taken to Twitter and social media to express outrage. Liberal commentator Keith Olbermann called the FDA’s decision “moronic.” Conservative journalist Doug Heyes slammed the halt as a “terrible decision.” When something manages to attract this level of cross-party unity and condemnation, especially in today’s charged political climate, you know it has to be bad.

Don’t get me wrong, adverse reactions to a vaccine must be investigated and monitored. Safety and transparency are both critical in the race to vaccinate America and the world.

However, these factors must be balanced against a continuous need to keep a raging anti-vaccine movement in check. News reporting of any serious side effects or investigations is obviously encouraged, but limits must be placed on its extent until scientists prove that they are, indeed, truly linked to a vaccine. If there is excessive fear, hesitancy will go up, and the virus will ultimately claim more victims. And sadly, that is slated to happen in the U.S. and beyond, all because of sensational media coverage and an overly cautious and bureaucratic government.