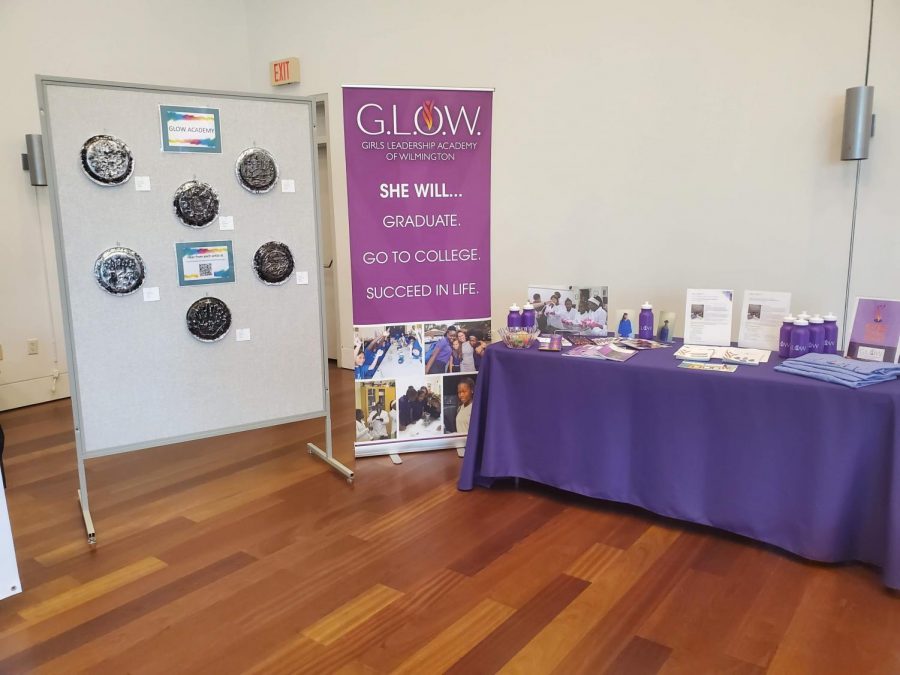 A picture of foil reliefs created by students of GLOW Academy in the "Just Us" program in the Cameron Art Museum.

A frowning Pikachu stands atop a column in the figure of a woman with her hands behind her back. The woman is an atlas, an architectural term for a sculpture that appears to support a structure—based on the Greek mythological figure Atlas who hefted “the weight of the world” on his shoulders.

A seventh grader named Michelle stitched the rendition by hand on a swath of indigo-dyed fabric. The woman in the illustration is her sister.

In a voice recording that describes the embroidery, Michelle explains that her sister raised Michelle and her brother. She describes her sister having “to take on the role as a mother for us” and the guilt she feels for the responsibility divvied to her.

“She had so much on her shoulders at that time,” Michelle says in the recording. “I don’t know how to repay my sister, but I’m so thankful that I have a sister like her. And I’m very, very thankful for showing my art that you see.”

Michelle’s embroidery is one project out of 60 on display at the Cameron Art Museum from April 1 to April 18. The embroidery, and the other mediums of art in the exhibit—including foil reliefs and sculptures—are the end product of an afterschool program titled “Just Us.”

“Just Us” is a pilot program designed to give youth a space and medium to feel safe and to build resiliency in the face of trauma or injustice. Kimberley Cheatham—the outreach coordinator for UNC-Wilmington’s Office of Institutional Diversity and Inclusion—formulated the program in response to the Black Lives Matter movement.

With the help of two education students, Dr. Janna Robertson—UNCW professor, social activist and artist—wrote the curriculum for the program.

“Research shows that when people talk about their own resilience stories, it’s really powerful,” Robertson said. “If you’re trying to get kids to change their perspective…. from being someone that life happens to, to someone who happens to life, that change in perspective is pretty monumental.”

The “Just Us” curriculum is interwoven with art, wellness and resiliency strategies, and lessons on Black history and culture.  It focuses on art as a vessel for self-expression and as a symbolic monument and delves into questions for students to consider like “what helps to hold you up when life gets difficult?” and “what do you hold up?”

To Cheatham, despite the influx in programs and resources available to adults in the wake of the Black Lives Matter movement and during the pandemic, the youth remains a demographic too often left behind.

During the initial shutdowns of the pandemic, the mental health crises of kids and adolescents spiked while the frequency of their visits to emergency departments plummeted.

After attending a Community Resiliency Model offered by the New Hanover County Resiliency Task Force, a program focused on addressing trauma and healing, Cheatham realized the simplicity of the strategies could benefit youth.

“The intent originally was to be able to deliver resiliency strategies to young people who may not have access to those resources normally, when a parent did not subscribe to mental health resources or whether they didn’t have access to it because of their insurance plan,” Cheatham said.

Back in March, six teachers from the Brigade Boys and Girls Club, D.C. Virgo Preparatory Academy, DREAMS of Wilmington, GLOW Academy, Myrtle Grove Middle School and Trask Middle School implemented the pilot program to students who signed-on to it.

Although it was Cheatham’s initial idea, “Just Us”—a play on the words “just us” and “justice”—came to life with the collaboration of an array of local nonprofits and organizations.

Amongst them is the Harrelson Center, a humanitarian organization and nonprofit campus located in downtown Wilmington.

Christy Aley, the community outreach coordinator for the center, says that at the same time Cheatham was formulating “Just Us,” the Harrelson Center was turning its focus towards youth-based empowerment.

“We the nonprofits came together in a meeting in the fall and discussed how can we connect with our youth,” Aley said, “how can we let them know that we want to hear their voices and our desire to provide a space where they can connect and [are] able to give something back to the community and share with the community.”

Through the Harrelson Center, the “Just Us” project collaborated with the nonprofits, Turning the Wheel, GRITS (Girls Rocking It in the South) and Working Narratives, to address resiliency and storytelling from a variety of facets.

According to Aley, mere days after the nonprofits met, they heard that UNCW was beginning a similar project. After meeting, the group merged their ideas to culminate in the “Just Us” program.

A partnership with the Artivism series from UNCW’s Office of the Arts—led by Fidias Reyes—allowed “Just Us” to encompass the work of Dare Coulter. Coulter, an award-winning artist, designed the monument “Because It’s Time,” soon to be installed on UNCW’s campus.

“It made sense to integrate both projects,” Reyes said. “Students were able to meet Dare and talk to her about her creative process and how she uses art as a tool for social change. I was delighted to witness how Dare interacted with students and how she gave each one very thoughtful feedback, treating them like young, professional artists.”

Coulter’s sculpture is a testament to the Black history of Wilmington, alluding specifically to the Coup D’état of 1898, and featuring the use of atlases—designed to show how America and other institutions were built on the backs of those who were enslaved.

The focal point of Coulter’s sculpture, though, is not a historic figure or a tall monument; it’s a young girl.

To Coulter, she represents the future and the optimism for growth.

“The ability to change and to grow and to do better and be better is not lost on anybody, even my age or older,” Coulter said in a recording describing the sculpture. “But the hope is that the world gets left a better place and it’s just increasingly better…that these injustices become a thing of the past.”

Besides offering students the chance to imitate sculptures, the other techniques offered in the pilot program included foil reliefs and collages as well as the embroidery of hand-dyed Indigo fabric—a tribute to the Gullah Geechee culture.

Michelle’s artwork and audio story accompaniment are included in the exhibit at the Cameron Art Museum as a QR code, along with the art talks of other students’ work.

“My piece represents the word pain,” said another student Ava describing her piece.  “Resilience means to bounce back. And usually, you bounce back from pain or hurt. My atlas represents the struggle I have gone through in my lifetime and when I was younger.”

Another artwork, a foil relief of the sun setting beneath the ocean imprinted with music notes and the word ‘silence,’ represents power for another student.

“I find silence in music and when I think about it, silence reminds me of being underwater, the moment of calm it brings,” Kolby said. “Silence can be powerful but that doesn’t mean it isn’t best to speak up. Power is everywhere. You just need to look in the right places.”

To Aley, the inclusion of the voice recordings and the chance for the community to listen to the student’s voices is the ultimate empowerment.

“We specifically wanted to be able to let the children know that their voices are heard,” Aley said, “and to have that QR code that you scan with your phone so you’re able to listen to the children understand resiliency and what it means to them. It’s just empowering to know that we’ve planted the seeds for them.”