OPINION: Who is really behind the border crisis? (Hint: it is not Biden or Trump) 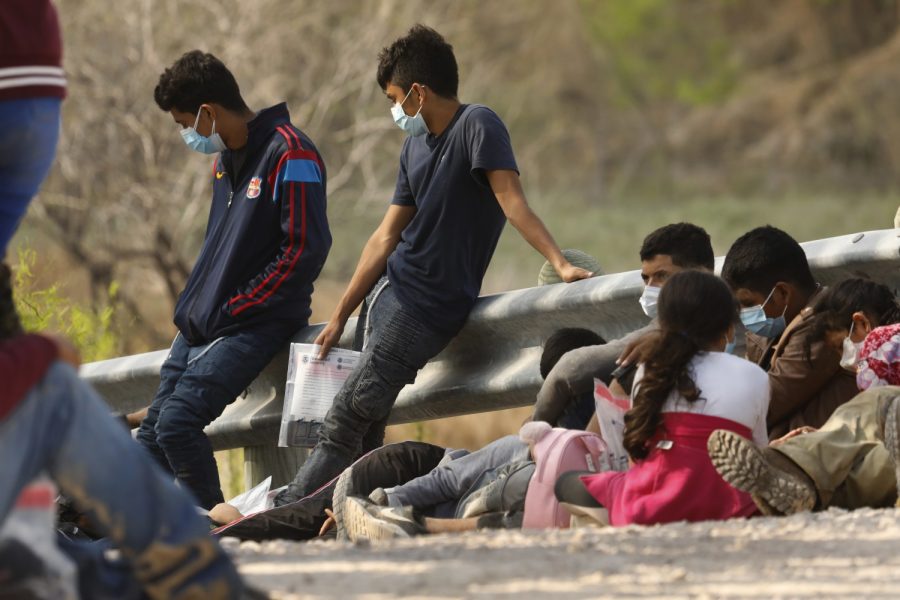 Asylum-seekers who crossed the U.S.-Mexico border illegally wait to be processed in Mission, Texas.

It is true that since Biden took office, the number of apprehensions of migrants entering the U.S. from the southern border surged after he promised in his campaign to enact more liberal immigration policies. It is also true that Trump’s directives were extremely controversial and sometimes in violation of human rights, which Biden harped on during his campaign.

The recent events at the border have sparked heated debate nationwide as to which president is culpable, or more culpable.

Both leaders bear responsibility, to an extent. Yet, more importantly, the blame game ignores a much more powerful player.

That’s right, biased and sensational news coverage of the border throughout both administrations as well as the 2020 election season is the most potent driver of the current crisis. The Trump administration faced frequent media denigration for its “zero-tolerance” child separation policy and deaths in detention centers.

While the backlash was rightfully warranted, the same has been happening under Biden’s watch, including a 9-year-old who died while attempting to cross the Rio Grande. While the death received widespread bipartisan attention, an overwhelming majority, 92%, of stories regarding the border in March 2021 have come from conservative outlets.

In contrast, a 2019 decision by Trump to house migrants at an Oklahoma military base previously used for the same purpose during the Obama administration garnered much heavier coverage from left-leaning outlets. Coverage by local media made clear that the facility was also used under Obama to minimize bias. However, publications like Time soon spun the story to draw attention to the fact that the base once served as a Japanese internment camp. While that detail is true, it was overly sensationalized and included in headlines by many different sources. In fact, a Google query of archived reports failed to find a single story denouncing Obama for using an internment camp to house overflow migrants.

Raw data, on the other hand, tells a much different story. According to Customs and Border Protection (CBP), which aggregates statistics for each fiscal year (Oct. 1 through Sept. 30), apprehensions of unaccompanied children totaled 50,036 during FY18 and 76,020 during FY19, for an increase of 52%, both years in which Trump’s zero-tolerance policy was active. The increase for family unit detentions was even higher, at 342%. This demographic also bore a much heavier burden of the apprehensions, with 107,212 during FY18 and 473,682 during FY19. Apprehensions for all groups peaked from March through May of FY19.

On the surface, it seems as if the partisan media coverage is justified. According to Google Trends, interest in the queries “migrant” and “migrants” soared in late 2018 and early 2019, the same period as the heightened apprehensions. Both the media attention and enforcement action were driven by a series of large caravans approaching the U.S. from Central America, prompting the high levels of attention. In late 2020 and into this year, another wave of caravans and apprehensions appeared. Detentions of unaccompanied children were up 92% and single adults up 188% for the five months ending February 2021 than for the same period through February 2020. But this is where evidence of media bias comes into play: during that latter period, Trends data does not indicate any renewed interest.

Yes, other, more urgent issues, like COVID-19 and the presidential election, largely took precedence over the border. But at the same time, though, the disproportionate coverage of the latter by conservative media throughout March 2021 raises strong suspicion that reportage by liberal outlets, or lack thereof, was politically motivated. The increase in migration was spurred by Biden’s victory and subsequent promises to undo the “damage” of his predecessor’s policies. Two devastating hurricanes earlier in 2020, combined with long-running systemic poverty, created desperate conditions in the migrants’ home countries.

Don’t get me wrong, the migrants are facing a mounting humanitarian crisis and need urgent help. Furthermore, the Trump administration’s stance on the matter was definitely over-the-top. Separating children from their families inflicted on them trauma they will likely be living with for life. These migrants should eventually be allowed to enter the U.S. legally, and in turn, the U.S. should donate aid to the home countries to attempt to ease the situation in the interim.

The U.S. immigration system cannot, however, let everyone in at once, especially in the specter of the pandemic. In turn, the media should stop acting like it can. It is the sensationalization of the end of the Trump administration and Biden’s promises for more liberal rules. Before long, that coverage backfired, with now detention centers still full and authorities still having to apprehend migrants.

In the end, while leaders, natural disasters, and systemic inequities were all involved, media coverage of the whole crisis bears the most responsibility and must be addressed before any other reformatory action can commence.