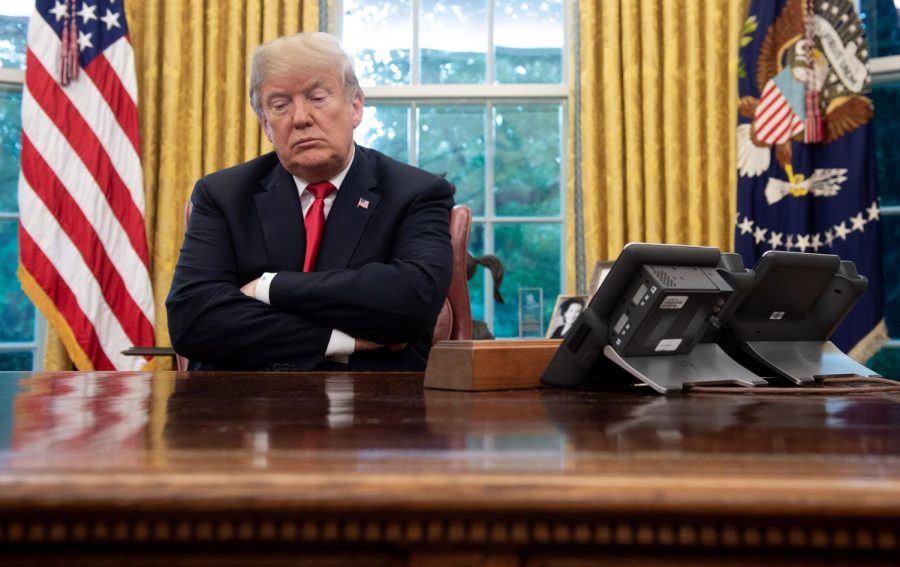 President Trump and his allies were livid when Twitter exercised its commercial prerogative and banned him.

Nearly 80 years ago, the Empire of Japan launched a surprise attack on Pearl Harbor, Hawaii. The next day, President Franklin D. Roosevelt addressed a joint session of Congress and asked for a declaration of war. Imagine if a company had the power to silence President Roosevelt as he spoke the words,

On Jan. 8, 2021, the social media company Twitter effectively silenced President Donald Trump when it made the following company announcement:

A private American company should not have the power to silence the voice of the president of the United States. Ever. And not for any reason. It is entirely too dangerous. Let‘s look at why we cannot allow a private company to silence a president again.

With the troubling days we currently live in, it may be difficult for some to imagine America getting any worse. But history shows darker days have happened before and it stands to reason dark days will happen again.

If you look back to the early 1930s, you can see events and frustrations eerily similar to, and maybe worse than, the events at the Capitol earlier this year. In 1932, the Great Depression had been laying waste to the world’s economy for several years when an unusual group of demonstrators descended on the nation’s Capitol. They were not there for the afternoon; they made camp there for a few months. Thousands of World War I veterans known as the Bonus Army made their way to Washington to demand immediate payment for their “Adjusted Service Certificates.” They, like many Americans across the country, were going through very difficult times and needed to cash in their ‘bonuses’ for serving in the military.

These protesters started arriving in Washington, D.C. in May 1932. On July 28, President Herbert Hoover put in the order to forcibly drive the veterans from camping out in front of the Capitol. The police were initially tasked with driving out the Bonus Army. This resulted in the police shooting and killing of two veterans. When the police failed to evict the people, President Hoover called in the military.

Two future five-star generals—Gen. Douglas MacArthur and his then-aide Maj. Dwight Eisenhower—along with Maj. George S. Patton, six tanks and 1,000 troops arrived and forced the veterans, some who had their wives and children with them, out of the city. This violent assault led to many injuries and the death of a 12-week-old baby. Hoover subsequently lost the election in November to FDR. Many, including FDR himself, believed that the way the Bonus Army situation was handled resulted in Hoover’s overwhelming defeat.

FDR was sworn into office on March 4, 1933. His first radio broadcast to the American people was made just over a week later. These radio addresses, which became known as fireside chats, helped FDR advocate his new agendas and gave him a new way to talk directly to the people. The fireside chats were unlike anything previously available. It was in FDR’s unique use of radio, which was the technological equivalent of television in the 1950s and of the internet today, that enabled him to speak to the people in a personable way that knew no equal in 1933.

FDR, a Democrat, faced an adversarial force in the dominant press of the day—newspapers—the majority of which were conservative. This is in stark contrast to today’s press which most will agree is more left-leaning than the right-leaning newspapers of the 1930s. And while FDR had major resistance from the newspapers, he found solace in his radio broadcasts. You could consider it, in today’s terms, his very own social media venue.

If you compare the use of Twitter by Trump during his presidency, you will see a similarity in FDR’s use of radio. FDR’s fireside chats started eight days after he took office and continued throughout his unprecedented four terms in office. Many presidents have since used radio broadcasts to reach out to the American people. President Ronald Reagan, a former radio sports announcer, revived the radio address during his presidency.

Trump initially continued the tradition of using radio to address the nation in weekly broadcasts but then ceased. Instead, he chose to use a more modern form of communication than the 100-year-old radio broadcast. Right or wrong, Trump chose Twitter.

Now, I’m not going to argue that Trump’s tweets calmed the nation. I believe most would agree that calming is not the best word to describe Trump. But since Trump chose to use social media to communicate with the American people, that line of communication should have stayed open.

The company listed two tweets by the president as justification for pulling the plug on his Twitter account. This suspension effectively ended 48 months of continual tweets by the 45th President of the United States to the American people.

Do you believe Americans would have accepted the silencing of FDR in the 1930s? What about after the attack on Pearl Harbor in 1941? What if someone who had the power to pull the plug on the fireside chats did not want our country to enter into World War II and decided to silence the president?

Some may say that FDR was not advocating violence or harm to Americans on the radio as some have charged Trump as doing on Twitter. I believe such an idea is rather naïve, especially with the benefit of 80 years of Monday morning quarterbacking to draw upon.

Was FDR stirring the pot in his “Arsenal of Democracy” radio address on Dec. 29, 1940? This was almost a full year before the attacks on Pearl Harbor. When FDR told the world that the then-neutral United States would be assisting Great Britain in its fight against Nazi Germany, did that declaration provoke the Empire of Japan to attack our country out of fear and in the interest of self-preservation? The Empire of Japan had become a member of the Axis Powers in September 1940, just three months before FDR’s fireside chat on the subject.

Another example of violent rhetoric on the part of FDR was his 1932 acceptance speech after winning the Democratic nomination for president.

“I pledge you, I pledge myself to a new deal for the American people. Let us all here assembled constitute ourselves prophets of a new order of competence and of courage. This is more than a political campaign. It is a call to arms. Give me your help, not to win votes alone—but to win in this crusade to return America to its own people,” FDR said.

I believe these words were a much better example of violent rhetoric than the two tweets that Twitter cited as the reasons behind Trump’s silencing. Trump’s tweets could almost be seen as lame in the light of FDR’s speech.

Over 400,000 Americans lost their lives in World War II. If you add in the wounded totals, then over 1 million Americans were killed or wounded in the war. Can it be argued that FDR was guilty of saber–rattling in his fireside chats? Did that kind of rhetoric result in the death or wounding of over 1 million Americans? Should someone have pulled the plug on FDR’s fireside chats before World War II began?

Five Americans died in the unfortunate events at the Capitol on Jan. 6, 2021. According to the impeachment trial of Trump in regard to those events, he was found not guilty by the United States Senate. I’m not saying those five lives are not important; they were five irreplaceable American lives. But how can we condemn an acquitted president in light of the loss of those five lives and not condemn another president in light of the loss of 400,000 lives?

Earlier I mentioned how dangerous it was for Twitter to silence Trump’s tweets in the last days of his presidency. Many hostile countries could have falsely interpreted Twitter’s ability to silence Trump’s voice. Such an act could have been seen as a sign that Trump was weak and America hopelessly divided. That, along with the fact that our country was in the middle of a presidential administration transition, could have been all that was needed for such a country to attack. Can we risk another 9/11 or Pearl Harbor just because an irresponsible company with a different political agenda from the president wanted to make a sucker punch in the last days of his presidency? I believe that move put more than five lives at risk.

After all, couldn’t it be argued that Twitter’s suspension of Donald Trump was all about politics and not safety? Is it not true that Twitter profited for over four years from President Trump using their product to talk to the American people? Imagine how many companies would love such an endorsement of their product by a sitting president. If Twitter was so concerned about safety and the inciting of violence, then why didn’t they suspend the president years earlier? President Trump’s persona and tweet activity are well-known after five and a half years since his June 2015 announcement that he was running for president. Twitter waited until about a week before President Trump was leaving office to finally suspend him. After so many years of exclusive use, Twitter decided to finally rein in the president. Was this done because Twitter knew they could no longer benefit from Trump’s use of Twitter? Or was it that Trump had finally crossed a line he could not walk back?

On the matter of Trump inciting violence, one of the tweets that Twitter used to justify suspending the president’s account was the tweet that stated Trump would not be attending the inauguration. Is that a violent tweet? Then what could be said of then-President-Elect Joe Biden’s response that the two men finally agreed on something? I see the statements by both men as childish, but not violent.

On Friday, Jan. 8, 2021, Twitter chose to permanently suspend a sitting president.  Regardless of where you stand on Trump, can our nation allow a company to pull the plug on the president of the United States as Twitter did? Should a tech company have the power to silence a president while he or she is in office if the president used the communication medium throughout his or her presidency?

This is a subject that will probably be discussed for many years to come. And rightly so. Regardless of your opinion, this is something that needs to be worked out should it ever present itself again.