An inside look into the film studies major and new building 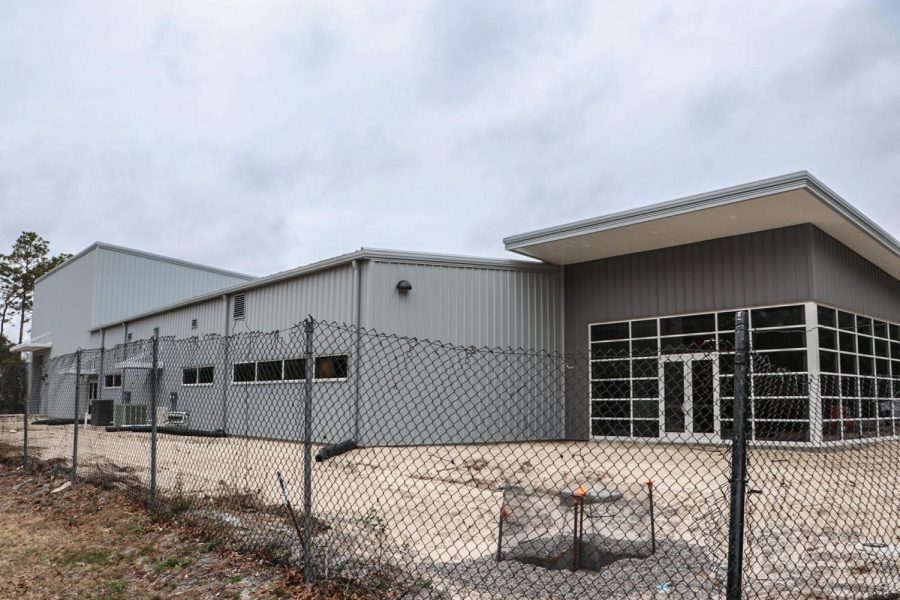 A new building for the Film Studies department is under construction.

UNCW’s Film Studies program is one of the university’s major academic attractions. Blending film theory and production, both undergraduate and graduate students learn the essentials of the craft while also having the opportunity to specialize.

Not only is it an educational experience, but the program encourages community amongst their students, leading to a unique level of connection and friendship throughout the department. With the new Film Studies building currently under construction, the department will soon have a space representative of its magnitudinous presence within UNCW’s curriculum.

The undergraduate program—the Bachelor of Arts in Film Studies—is a heavily saturated area of study at UNCW. Many students who seek admission into UNCW do so with the intent to major in Film Studies due to its reputation as a quality, comprehensive curriculum.

According to Dr. Mariana Johnson, the chair of the film studies department, “Students will gain skills in every aspect of filmmaking [throughout the program], including producing, writing, directing, lighting, editing, marketing, critical thinking and film analysis.”

Genie Mason, a graduate student specializing in sociological film approaches, described its structure: “[The major] is split half-and-half between critical studies and production. Early on, you take some pre-req[uisite]s to establish baseline knowledge in both categories, but after that, you choose classes from groupings that correspond with your other requirements. While there is some specificity, you can easily gear toward what interests you. The final capstone classes, kind of like senior seminars are specialized, so you are able to graduate with some niche knowledge from those.”

Both the faculty and the academic excellence of the major are a draw. Professors are instructors and mentors, working with their students to launch special projects and provide hands-on experience.

According to Anya Williams, a graduate student specializing in feminist film revision, “[the faculty] have a lot of knowledge and a diverse skill set amongst them, which means that we learn a great deal more from all sorts of different angles that we may not have otherwise been exposed to.” They also emphasize diverse perspectives within film, expanding the usual canon to include cinema representative of all people groups.

The graduate program, much newer on the scene than the B.A., is also rapidly attracting students to UNCW.  “We offer a MA in film study and an MFA in filmmaking,” said Dr. Johnson. “This allows our graduate students to specialize in one of the two areas.”

Both master’s programs begin mixed during their first year, and then split into their areas of focus, offering general classes and then electives in each vein. Finally, the graduate students spend their last year in the program preparing their thesis on the topic of their choice.

Williams expressed her appreciation for the freedom the curriculum afforded her, saying, “I think that, as a newer program, we have greater freedom and can work with the faculty on projects of our own design, within our own specific interests.”

Both Williams and Mason have gained work opportunities through the relationships established within their respective programs, providing evidence of the practical experience to be found in the Film Studies department.

The new film studies building, located at the far back of campus along Riegel Road, will be open to students this coming fall. According to Dr. Johnson, this project was first set on in 2014, with the creation of the MA and MFA programs.

“We could not start [the graduate programs] without knowing this facility would come to fruition,” said Dr. Johnson. “We wouldn’t have the space to accommodate everyone otherwise. We’re busting at the seams as it is.”

Currently, film studies classes are housed in both King and Kenan Hall on campus. Neither are large enough to hold the entirely of the department, which makes this location’s ample space extremely exciting for faculty and students alike.

“We want to meet the needs of our students, and we would not be able to do that in our existing spaces. We will provide extensive opportunities for hands-on experience that is essential for learning about film and for making film and media. It will bolster our students’ education in every possible way,” said Dr. Johnson.

The new facility will house several impressive spaces that are sure to bolster the film studies learning experience. It will have a glassed-in lobby; a new production classroom; a brand-new editing lab; a sound recording booth and a sound mixing booth; an equipment room that will be about three times as big as our current one; and an eighty-seat movie theatre.

The most exciting feature, though, is a 4000-square-foot soundstage, which will act as the department’s own studio. Dr. Johnson said of this feature that “[i]t’s going to be a very versatile space that allows students to explore all areas of film, from narrative film to installations and projection mapping.”

There will also be a lot of outdoor space for filming and screenings. It is a major update for the Film Studies program that all prospective and current students are looking forward to.

“I think [the new building] will give us space to have more learning opportunities collectively,” said Williams. “For example, a few grad students put together the Cinematheque to get film studies students together. I think a new, spacious building will provide more opportunities to foster that kind of community and create together. The building also has tech that will bolster production classes, such as the soundstage. Overall, it’ll allow us to do more!”