OPINION: We need youth in the government 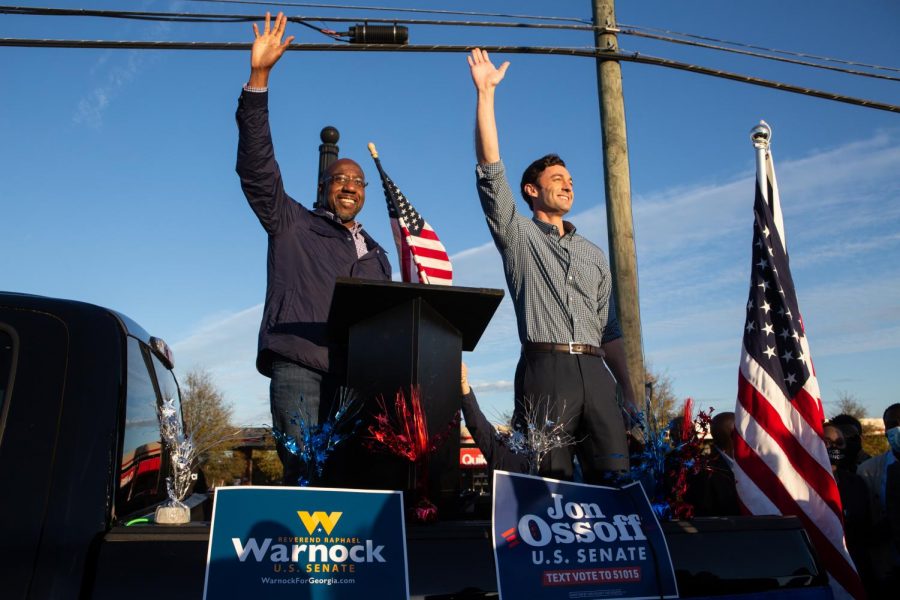 Democratic U.S. Senate candidates Jon Ossoff, right, and Raphael Warnock of Georgia wave to supporters during a rally on November 15, 2020, in Marietta, Georgia.

At a judiciary committee hearing in 2018, Senate President Pro Tempore Orrin Hatch, the oldest member of the senate at the time, questioned Facebook CEO Mark Zuckerburg over issues concerning privacy, monopoly and bias. While there, Senator Hatch used his questioning time to ask Zuckerburg, “How do you sustain a business model in which users don’t pay for your service?” Zuckerberg responded, “Senator, we run ads.”

Now, this lack of understanding of Facebook is certainly not a disqualification from being a sitting senator. After all, Senator Hatch, 83 at the time, was the oldest serving Senator, making it less than surprising that Hatch would not be well versed in Facebook’s business model.

However, in an ever more technologically reliant United States, one where cyber threats grow stronger day by day, it is in the nation’s best interest that its elected officials are well versed, or at least sufficiently versed, in the most pressing issues and their intricacies.

It is fitting then that the youngest sitting senator, newly elected Jon Ossoff, 33, would join that same committee three years later. In a campaign that was widely lauded for its outreach efforts through social media like Tiktok, Ossoff showcased the strengths younger candidates can possess at their most savvy in reaching out to younger voters and articulating the issues in ways that seem relevant and important.

The beauty of congress is the diversity that comes with it. (At least in theory). It was designed to be the closest linked to the people of the three branches and it has stayed that way throughout its history. And yet, age continues to be an obstacle in the path towards true representation. The average age of the 116th senate was 62, with only one Senator under the age of 40, that being Senator Ossoff.

While it does not require a younger person to understand certain concepts, youth brings a fresh perspective and an entirely different outlook than those older than them. How can we compare the experiences of Hatch, born in 1952 with Ossoff, born in 1987 and expect them to think, let alone know the same things.

And we’re finally starting to see a new generation of leaders step up to governing positions. Alexandria Ocasio-Cortez, 31, was notable for becoming the youngest representative in congress back in 2018 at age 29 along with several other prominent representatives.

Pete Buttegeig, 39, who ran for president in the 2020 Democratic primary, became the first openly gay person to win a presidential primary state and is now the youngest ever secretary of transportation in the Biden administration.

Madison Cawthorn, 25, became the youngest representative in congress last year taking that title from Ocasio-Cortez only two years later. These changes across both parties show that progress is inevitable, but it is encouraging nonetheless to see that young leaders from every generation are finally assuming leadership roles.

There’s a saying in congress that explains how we need staggered terms because “someone needs to show the new guys where the bathroom is.” And that saying rings true for those more experienced representatives showing the less experienced how legislation works. For a long time, age has equated to wisdom, and that’s not an inherently incorrect assumption. Experience does come with time, however, perspective is equally as important in a representative democracy, and it will take everyone’s unique perspective to guide us through the next generations to come. Because, to be frank, how long does it take to find a bathroom?