The biggest moments from the latest episodes of “WandaVision”

An in-depth look at Episodes 4, 5, and 6 of Disney+’s popular Marvel series 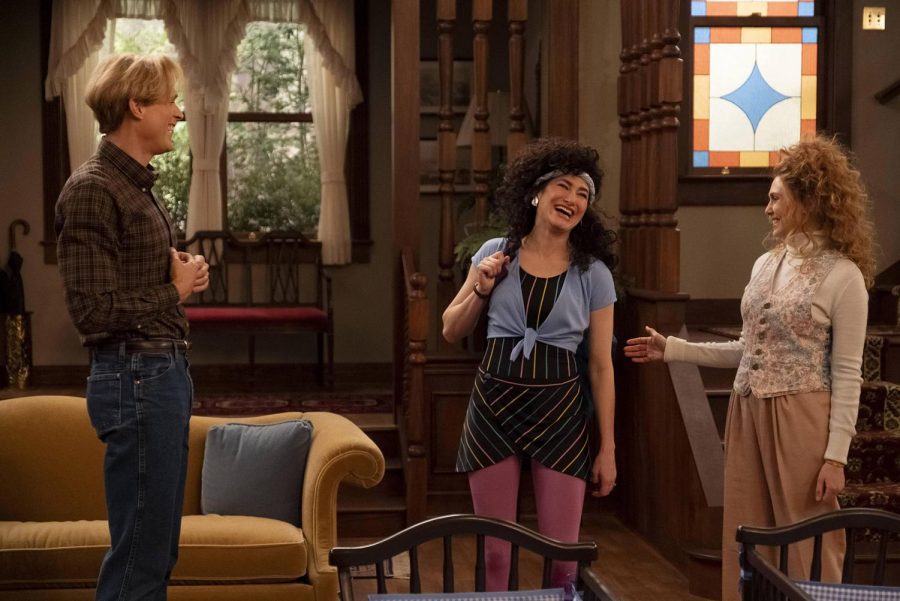 Whether Agnes (Kathryn Hahn, center) is Agnes Harkness or not, her amazing performance as the generic "nosy next-door neighbor" character is one of the best parts of "WandaVision." And yes, those clothes she, Vision (Paul Bettany, left) and Wanda (Elizabeth Olsen, right) have on are what people wore in the 1980s.

Since Marvel Studios made its Disney+ debut with “WandaVision” in January, it has been universally praised by critics and viewers alike for its daringly unique take on the MCU mythos. The series follows the relationship between Avengers Wanda Maximoff (Elizabeth Olsen) and Vision (Paul Bettany) as they reside in the vibrant suburban setting of Westview. In its first three episodes, the series conjured a number of questions and theories through various twists and references to previous Marvel comics and films. The latest round of episodes has answered some of the first three episodes’ mind-boggling questions while also creating new ones.

The latest trio of episodes continues to pay homage to TV sitcoms from different decades and delve into darker revelations while introducing new characters as the final episodes approach.

(The following passage contains SPOILERS for  “WandaVision” below).

Episode 4 stands out as the only installment thus far to almost entirely take place outside of Westview and provide viewers with a behind-the-scenes look that answers some of the show’s mysteries. With the arrival of FBI Agent Jimmy Woo (Randall Park), previously seen in “Ant-Man and the Wasp,” viewers are provided with an investigative semi-focal character in the vein of Fox Mulder from “The X-Files.” Partnered with S.W.O.R.D. operative Monica Rambeau (Teyonnah Parris) and investigating a missing person case initially, Woo witnesses her get pulled into Westview and collaborates with S.W.O.R.D. in monitoring the energy field surrounding the town, which is dubbed “The Hex.”

Viewers are re-introduced to Darcy Lewis (Kat Dennings), who was previously featured as a supporting character in the first two “Thor” films. Now an astrophysicist, Darcy is tasked with studying “The Hex,” and uncovers the sitcom setting of “WandaVision.” Their presence clears up the mysteries of the previous episodes, as it’s confirmed that Darcy is the viewer watching “WandaVision” from the end of the first episode and Woo is the voice on the radio trying to contact Wanda in the third episode.

In a memorable and comical sequence, the duo takes on the role of the audience as they begin to analyze and draw theories after watching the first episodes of “WandaVision.” In a clever fashion, the pair injects the MCU’s signature humor into the episode while offering viewers a better understanding of the events that have taken place so far. Viewers can come to expect an even greater presence from the two characters beyond “WandaVision” as the coming phase of the MCU is said to delve even further into the multiverse concept.

As seen in episode 3, Wanda miraculously gives birth to twin children named Billy and Tommy. The opening of the fifth episode shows the twin brothers are able to age unnaturally at will and they go from infants to school-aged children in an instant. The two boys are aware of Wanda’s abilities, as they encourage her to use her powers to revive their deceased pet dog, to which she declines.

Viewers can notice the parallels the twins share between Wanda and her late brother Pietro, which is intentional. As one can expect, it’s revealed in the sixth episode that the boys possess superpowers that are seemingly inherited from both Pietro and Wand; Billy has acquired Wanda’s telepathic abilities whereas Tommy has Pietro’s speed. While the opening of episode six pays homage to the intro and narration style of late 90s-early 2000s sitcoms like “Malcolm in the Middle,” the fact that the opening scene focuses on the twin brothers hints at a larger role that they’ll play in the remaining episodes.

(SPOILERS) Long-time fans and readers of Marvel comic books will recognize that the twins are adaptations of Wiccan (Billy) and Speed (Tommy), Wanda’s children from the original comics. Given the show’s storyline influences so far, particularly “House of M,” viewers can expect the upcoming episodes to take a more complex and darker turn. In the comics, Billy and Tommy are created from Wanda’s imagination, which ultimately leads to a fractured reality. Through even more convoluted means, there’s an instance where Billy and Tommy are reincarnated into reality as unrelated individuals involving a demonic villain known as Mephisto. Although the show has seemingly carried a sci-fi atmosphere so far, it’s to be expected that supernatural elements will become more prevalent soon.

The town of Westview has introduced several interesting residents so far, but the one that has been the most prominent so far is Agnes (Kathryn Hahn). Through the lens of traditional sitcoms, Agnes fulfills the role of the best friend, or the nosy neighbor, who recurs throughout the series. It’d be simple to write Agnes off as just another character who’s being controlled by Wanda, but there’s much more to her than meets the eye.

When Woo and Darcy are identifying the captive cast on the bulletin board, Agnes stands out as the only profile that doesn’t have an ID picture attached to it like the others. With this in mind, it’s possible that she may be someone created by Wanda’s imagination or an unknown entity. As the show begins to hint at a supernatural presence,  a throwaway line from from the second episode may carry a hint; when Dottie, one of the residents states, “The devil’s in the details,” Agnes then whispers to Wanda, “That’s not the only place he is.”

There’s also the moment in episode 5 where Wanda openly uses her powers in front of Agnes and states that she likely didn’t notice. Wanda’s openness signals a familiarity with her that either points to Agnes being her very own creation, or a figure simply just playing along with Wanda’s facade reality with the intention of corrupting her.

The idea of Agnes being anything sinister is nearly ruled out by a scene in episode 6 where Vision encounters her amongst the Westview residents who are frozen in place in a certain region of the town on Halloween. Vision breaks her from her trance momentarily, and her conversation with him initially makes it seem as though she’s one of the victims of the town, as she asks if Vision is there to rescue them. However, after Vision is shown to have no recollection of being an Avenger or life prior to the series, the scene takes an eerie turn when Agnes says “All is lost!” and begins laughing maniacally before Vision reverts her back to the trance.

In what has been argued as the biggest game-changer of the series so far, Pietro shows up at Wanda’s door at the end of episode 5. However, the key aspect to note in this reveal is in the casting of Pietro. Rather than the character being Aaron Taylor-Johnson and reprising his role from Avengers: Age of Ultron, the role is played by Evan Peters. Peters previously played a completely different version of Pietro in Fox’s X-Men films, which shared no connection to the MCU.

Given Spider-Man 3’s intriguing casting news, it’s possible that this introduction marks the MCU’s very first foray into the multiverse. However, episode 6 hints that this may not be the case. Although Peters’ portrayal of Pietro retains his juvenile wit from the X-Men films, he never refers back to the events of the X-Men films and only refers to moments within the MCU continuity, such as flashbacks to his and Wanda’s homeland of Sokovia.

Even then, the flashback is likely fabricated as the two are seen trick or treating as children while dressed as Black Widow and Nick Fury costumes. In addition, the brief instance where Wanda sees a deceased Pietro portrayed by Peters lends credence to the idea that his casting is simply a red herring.

If Peters isn’t really Pietro, it’s likely that he may secretly be Mephisto. Aside from the devil quote from Agnes in an earlier episode, this theory is supported by Pietro’s Halloween costume hairstyle being similar to that of Mephisto’s in the comics. There’s also the fact that his personality seems devilish as he convinces Billy and Tommy to steal Halloween candy using their powers, as well as cracking the dark joke about Vision dying twice, which then prompts Wanda to attack him.

The series has offered a deeply complex narrative that has revitalized interest in the MCU after its brief hiatus due to the COVID-19 virus. Every week, viewers are left with events to contemplate as they await answers in the forthcoming episodes. The final three episodes have been revealed to have full hour runtimes as opposed to the current half-hour runtime, offering sufficient time to provide viewers with much-needed answers.