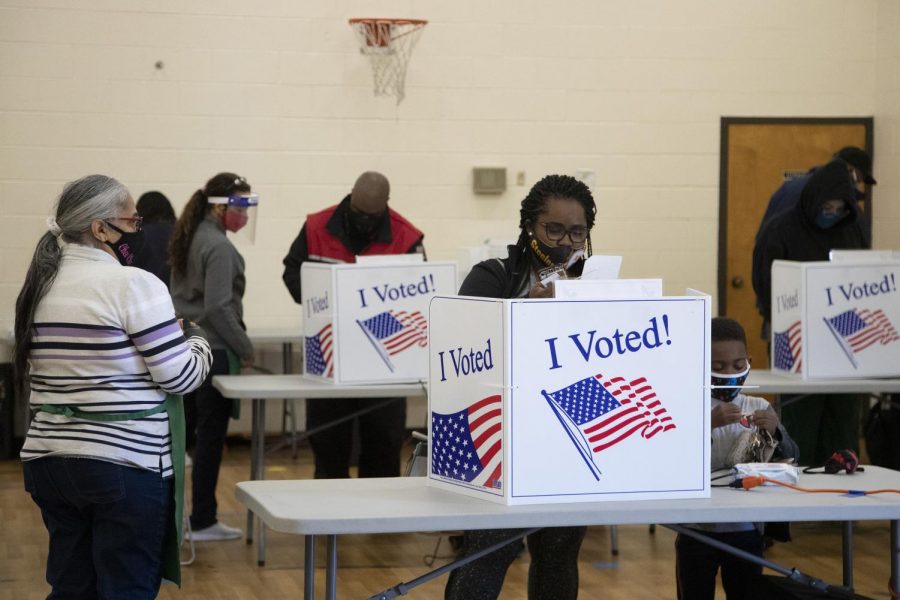 India Richburg votes with her son Nash Waiters, 4, at the North Springs 2 voting location in Columbia, South Carolina on Tuesday, Nov. 3, 2020. "In and out in five minutes, tops," Richburg said, describing how long it took to vote.

Over the past few decades, North Carolina has been considered an electoral “battleground” state: that is, a toss-up state that is not solidly red or blue and plays a pivotal role in deciding the winner. The Tar Heel State boasts bustling cities and research hubs that tend to lean very liberal, as well as ultra-conservative rural communities that encompass most of its geographic area. As a result, North Carolina’s growing suburban wing ultimately decides the state’s elections.

Unfortunately for Tar Heel Democrats, North Carolina has turned out to be much redder than it may appear. Since 1980, the state has voted Republican in all but one presidential election, when Barack Obama clinched it by a razor-thin margin of 0.3 percentage points in 2008. Recent polling errors have also strongly favored conservative candidates. According to FiveThirtyEight, Joe Biden was favored over Trump 48.9% to 47.1%, but the president won 49.9% to 48.6%.

North Carolina’s own government also appears to be reasonably balanced, with both a solid Republican legislature and long history of electing mostly Democratic governors. However, a closer look reveals a clear Republican slant, because the governor’s party is a weak indicator of a state’s general political situation. Democrat Andy Beshear of Kentucky and Massachusetts Republican Charlie Baker underscore this phenomenon. The legislature, on the other hand, is much more powerful and has been able to satisfy a lengthy conservative agenda, including some controversial bills like a 2013 voter ID law that was eventually struck down by a court, over the past decade.

The Tar Heel State’s long history of electing Republicans, from legislative members to presidential candidates, reveal an electorate much more conservative than numbers show. For starters, North Carolina very much remains a Southern state, with a white population disproportionately voting red. According to polling taken roughly two months before the 2020 election, 40% of white, college-educated voters said they were planning on voting for Trump. The poll also found that more than half of that same group voted Republican in Georgia, a state that did flip blue and North Carolina Democrats are using as a playbook to flip their state.

One of the main reasons Georgia flipped and North Carolina did not was the Peach State’s larger Black share of its electorate, with 32% compared to the Tar Heel State’s 23%. Georgia also experienced two major events in 2020, the murder of Ahmaud Arbery and the police killing of Rayshard Brooks, that helped awaken its African-American population to the harsh realities of systemic racism. Increasing polarization within North Carolina also likely kept it red, with Trump’s 2016 margins in its most conservative counties expanding further. But these comparisons should be taken with a grain of salt because the presidential races in both states were extremely tight, much tighter than four years ago.

The good news for Tar Heel Democrats, though, is that recent demographic changes in North Carolina play into their favor. The number of ballots cast by Latinx voters, for example, in the state increased threefold from 2016 to 2020. Across the nation, two-in-three voters in this group supported Biden. African-Americans, who also tend to favor Democratic candidates at much higher rates than the general population, were outnumbered by white people three-to-one in 2018 but accounted for 38.4% (22,722) of the total new Black and white people (59,188) added the year prior. Furthermore, while the state’s population continues to grow, that growth is happening much faster in urban counties than rural counties. Trump still won North Carolina in 2020, but by a much, much narrower margin.

Migrations into the Tar Heel State are also heavily Democratic. Blue states comprise three of the top five states inbound North Carolinians hail from; in 2017, 76,000 North Carolinians combined migrated from New York, Virginia and California, compared to 27,000 from solid red South Carolina and 32,000 from the swing state Florida. Other major states of origin, defined as 10,000 or more migrations to North Carolina, are either blue states, like New Jersey and Maryland, or other mixed states, like Pennsylvania and Ohio. In other words, any given voter moving into the Tar Heel State is more likely to be liberal than conservative.

While North Carolina seemed to stay almost completely red during the 2020 election cycle, liberals in the state should not despair. Their road ahead may be bumpy, but every sign points to them increasing their power over the years and decades to come. The disproportionately high number of Black Americans born in 2018, for instance, may be 18 years away from the ballot box, but by the time they are there, the Tar Heel State should be much easier for Democratic candidates to win elections. They are already on the cusp of retaking the state from years of Republican rule, and all they need is a bit more time and fight.