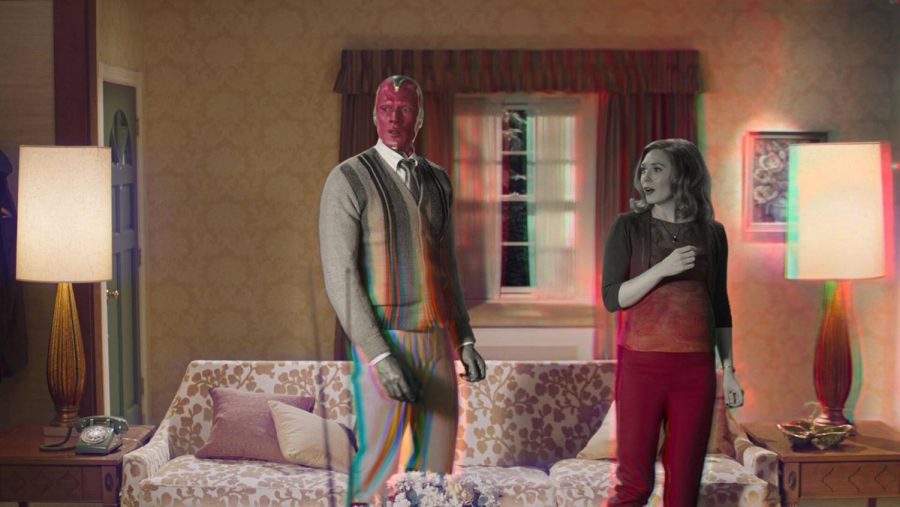 After facing a long hiatus brought on by the difficulties and challenges of the previous year, Marvel Studios returns with a new installment in the form of “WandaVision,” which marks the first MCU-set series to debut on Disney+.  The series focuses on the relationship between Avengers Wanda Maximoff (Elizabeth Olsen) and Vision (Paul Bettany) in the vibrant retro suburban neighborhood setting of Westview. The greatest feature of the first three episodes is how they emulate and pay homage to TV sitcoms of the 1950s and 1960s with the inclusion of a live audience laugh track, the boxed-in 4:3 aspect ratio and its clever, lighthearted humor. This richly vibrant world is counteracted by instances of eeriness that hint at a much more ominous plot and leave viewers contemplating about what’s happening.

Notably, the series isn’t meant to be an entry point for the main characters as it’s set in the aftermath of “Avengers: Endgame” (2019). Newcomers would be quite lost and wouldn’t be able to understand or appreciate the show’s intricate details without prior knowledge of the characters or events of the MCU. The show also heavily borrows elements from comic book storylines such as “House of M” (2005), “The Vision” (2015), and “Vision and the Scarlet Witch” (1982). Both MCU and comic book fans alike are sure to notice plenty of clues and details that point to where the show’s plot might be headed.

(The following passage contains SPOILERS for WandaVision below).

As episode 1 of “WandaVision” draws to close with its initial credits sequences, the aspect ratio changes and the camera zooms out to reveal an unknown individual watching the first episode on a TV screen before turning it off. From what can be gathered in the brief seconds, the figure seems to be located at a military base of some kind as a helicopter can be heard in the background. The implications that can be drawn from this scene are mind-boggling. While it’s possible that Wanda might be held captive and forced into a dreamscape of some kind by a villain, that would be somewhat cliché and predictable. Another possibility is that Wanda secretly created her own reality or simulation and that an agency is surveilling it after having recently discovered it. Viewers will also notice the symbol of a sword on both the notebook and computer screen to the left. As the symbol becomes more prominent throughout the later episodes, viewers will begin to better understand what’s taking place.

The appearance of the red toy helicopter in episode 2 acts as a “glitch in the matrix” for the world of “WandaVision;” it stands out as the first colored item to appear in the black-and-white episodes. Wanda steps outside and finds the toy helicopter. The colored appearance and Wanda’s look of extreme worry implies that the world they’re in (a world that’s possibly of her own creation) has possibly been breached by an unknown threat from outside of the simulation. Upon closer inspection, viewers will notice that the helicopter is marked ‘57’ and sports the sword symbol in yellow on its front side. It’s possible that the helicopter may have been a surveillance device used by the agency alluded to in the previous episode. In an even stranger twist, this could represent one of the helicopters that was heard in the previous episode. Comic fans can recognize this as the logo for the Sentient Weapon Observation and Response Division (S.W.O.R.D.), a subdivision of S.H.I.E.L.D. that monitors extraterrestrial or otherworldly threats. The presence of S.W.O.R.D. hints that the reality created by Wanda may have world-altering consequences. On a different note, it’s also possible that the helicopter’s colorful toy appearance served as inspiration for her to want kids at the end of the episode and bring color into the reality.

During episode 2, while Wanda is conversing with one of the local housewives, a man’s voice interrupts the song playing and calls out for Wanda. While calling her name, he asks “Who is doing this to you Wanda?” While the episode’s credits don’t specify whose voice it is, MCU fans on the internet have theorized that the voice belongs to FBI agent Jimmy Woo (Randall Park), who previously appeared in Ant-Man and the Wasp (2018).  While the MCU portrays the character as an FBI Agent, he has been affiliated with S.H.I.E.L.D. in the comics. It is possible that he may now be a member of S.H.I.E.L.D., though there isn’t much to go off of at the moment other than the similarities between the speaker’s voice and Woo’s. Putting the man’s identity aside, his dialogue is ominous because it brings back the implication that she might be held captive in this supposed simulation and is in danger from an unknown force that may be within the simulation. But if Wanda is indeed in danger, it begs the question of why she seems so happy and eager to stay in the simulation while keeping others out.

The ending of episode 2 features what several fans can agree is the most questionable scene in the series thus far. After the sound of an outside disturbance brings Wanda and Vision outside, the two stand in complete shock as a man in a beekeeper suit, who’s surrounded by swarming bees, arises from a manhole cover. Wanda reacts to this by simply saying “no” as the scene is then rewinded back to an “alternate cut” of when Wanda announces her pregnancy to Vision. Given her reaction, it seems as though Wanda knows who the beekeeper is and perceives him as a threat to the fantasy world she lives in alongside Vision. And judging by her almost-nonchalant reaction to the figure compared to Vision’s look of genuine worry, it’s possible that this is not the first time the beekeeper has shown up to interrupt the simulation. A plausible explanation could be that Wanda is in control of the simulation and has the ability to alter or undo certain events to her liking. Also, it’s possible that the television viewer from episode 1 is really controlling the events of the “show.” For comic book fans, the beekeeper suit may represent something else in the Marvel universe, particularly the standard uniform of Advanced Idea Mechanics (A.I.M.), the villainous organization previously seen in “Iron Man 3” (2013). While this is only speculation, it’s possible that “WandaVision” allows A.I.M. to make a serious comeback as a more serious threat after many criticized “Iron Man 3’s” handling of its villains.

Geraldine (Teyonah Parris) has been the most interesting neighbor so far who’s had interactions with Wanda as the two hit it off perfectly in the second episode. However, the latest episode is sure to have many questioning her allegiance. After helping Wanda deliver her twin babies, Geraldine is revealed to have knowledge of Wanda’s past after she mentions her late brother Pietro, who sacrificed himself in “Avengers: Age of Ultron” (2015). Geraldine is revealed to be affiliated with S.W.O.R.D, which Wanda appears to understand once she notices Geraldine’s necklace bearing the agency symbol. After Geraldine tries to play coy and retain her cover, Wanda forcefully pushes her out of the simulation—where she then ends up on the field of a military base with reinforcements surrounding her. From this scene, it can be gathered that Geraldine is a spy from S.W.O.R.D. whose objective was to get closer to Wanda and maybe even coerce her to leave Westview with her. In the final shot of the episode, it seems that Westview isn’t really an alternate dimension, but an actual town that’s been altered or is being controlled while an energy field shrouds it. Also noteworthy is the appearance of what seems like a military camp set up right outside of town for the purpose of possibly studying it or trying to contain it.

(SPOILERS) Those who’ve kept up with casting before the show’s release may already know that Geraldine’s real name is Monica Rambeau. That name is sure to sound familiar to most fans because she previously appeared as the young daughter of  Maria Rambeau (Lashana Lynch)  in “Captain Marvel” (2019). In the comics, Monica carries superpowers relating to energy and speed, whether or not those powers are present in “WandaVision” remains to be seen.

Clue #7: Is Scarlet Witch the Villain?

A key aspect of this show that everyone can agree upon is that it shows Wanda and Vision at their absolute happiest. Given all the hardships that Wanda Maximoff has faced in the films, such as the two deaths of Vision, she’s easily the most tragic Avenger. As such, it’s really easy to see why she would be very protective about her and Vision’s presence in Westview, especially to the point where she may go to the extremes of keeping secrets from Vision. Even then, an explanation for Vision’s supposed revival has not been given yet. As the series progresses, one may begin to wonder just how far Wanda is willing to go in order to keep her fantasy lifestyle.

When taking the possibility of Wanda being a villain into consideration, one can look at the events of “House of M” and “The Vision.” In “House of M,” the expansive comic book storyline depicts the consequences of Wanda Maximoff’s attempt to recreate her lost children after suffering a mental breakdown and in turn alters the fabric of reality for the worst; in this critically-acclaimed storyline, readers were able to get a better sense of just how powerful she was. “The Vision,” which is highly regarded as the “Breaking Bad” of Marvel comics, focuses on Vision’s attempt to create his own family and live a normal life in the American suburbs; this life is then offset by a series of violent and sinister events. The two stories are blended together in “WandaVision” and offer a clearer picture of the moral dilemmas that could be in store for the two lead characters.

As the series progresses, it could easily turn into an origin story for Scarlet Witch, the moniker that Wanda carries in the comics but has not been referred to in the MCU just yet. Although she was introduced as somewhat of a supporting villain in “Age of Ultron”—and later became a hero—, it’s possible that losing control of the simulation could be the breaking point that sets her up as a villain for Phase 4 of the MCU. Considering that the show acts as a prelude to the forthcoming Doctor Strange sequel, which will feature Wanda Maximoff, it will be interesting to see what implications the series could have for the MCU going forward.

“WandaVision” crafts a deeply intriguing and clever narrative that will entertain fans of the MCU and superhero genre. One can’t help but to become deeply involved in trying to untangle the mysteries that lie ahead in the coming weeks for the Disney+ original series.