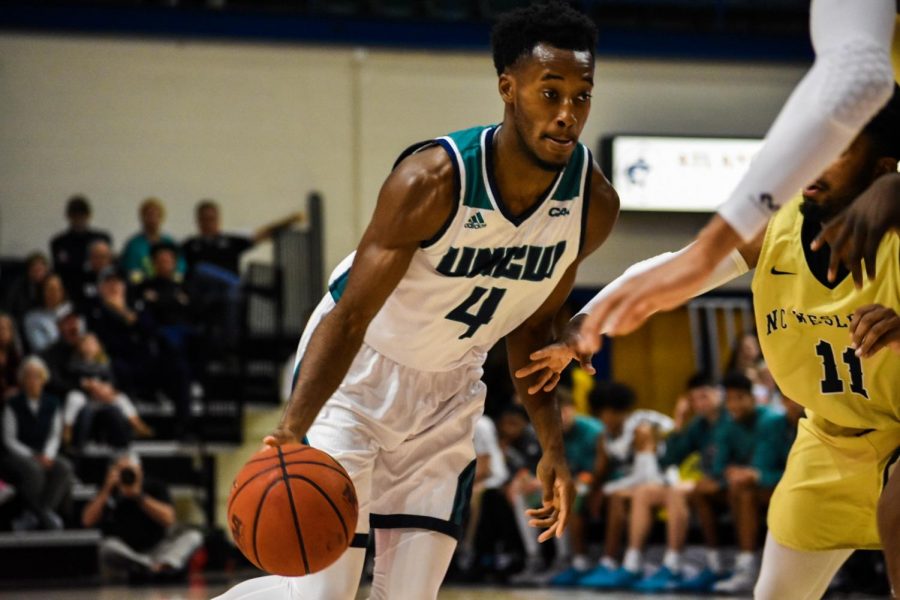 WILMINGTON, North Carolina – After losing back-to-back games to start conference play, UNC Wilmington (7-5, 1-2 Colonial Athletic Association) got a much needed 77-70 win over Delaware (4-7, 2-4 CAA) on Saturday afternoon. The victory serves as Takayo Siddle’s first CAA win as the head coach for the Seahawks.

“It was a huge win,” said Siddle. “We wanted to flush what happened against Towson and get better from it and learn from it moving forward…I gave the guys a lot of tough love and I thought they responded.”

UNCW started off Saturday’s contest undersized and undermanned. Brian Tolefree and John Bowen were both inactive against the Blue Hens and forced Siddle to play with only eight active players.

Jaylen Sims started the game on the bench, but soon found his rhythm after two slow games against Towson earlier this week. The junior led the team in scoring with 22 points and made a number of big-time shots late to put the game on ice for the Seahawks.

“I was just focused on taking better shots,” said Sims. “When they stopped me, I wanted to look for my teammates who did a great job of making shots.”

UNCW’s Mike Okauru continues to shine with Shykeim Phillips out. Okauru stuffed the stat sheet with 20 points, 6 rebounds and 6 assists.

“All that I ask my guys to do is play hard and play the right way and Mike has done that on a consistent basis for the last few weeks” said Siddle.

As a team, the Hawks once again got outrebounded 40-27 in a game where no UNCW player stood above 6-foot-6-inches. Luckily, the Seahawks’ shooting woes seemed to fade after shooting 50% from the field and 33% from three helped counter the size they were giving up on the defensive side of the ball.

Jake Boggs was assigned a big task for much of the game, having to guard Delaware’s Dylan Painter. The 6-foot-10-inch Painter finished Saturday with 23 points, 19 rebounds and helped the Blue Hens secure 17 second chance points.

UNCW will be back in action tomorrow at 1 p.m. to wrap up a two-game series with Delaware inside of Trask Coliseum.