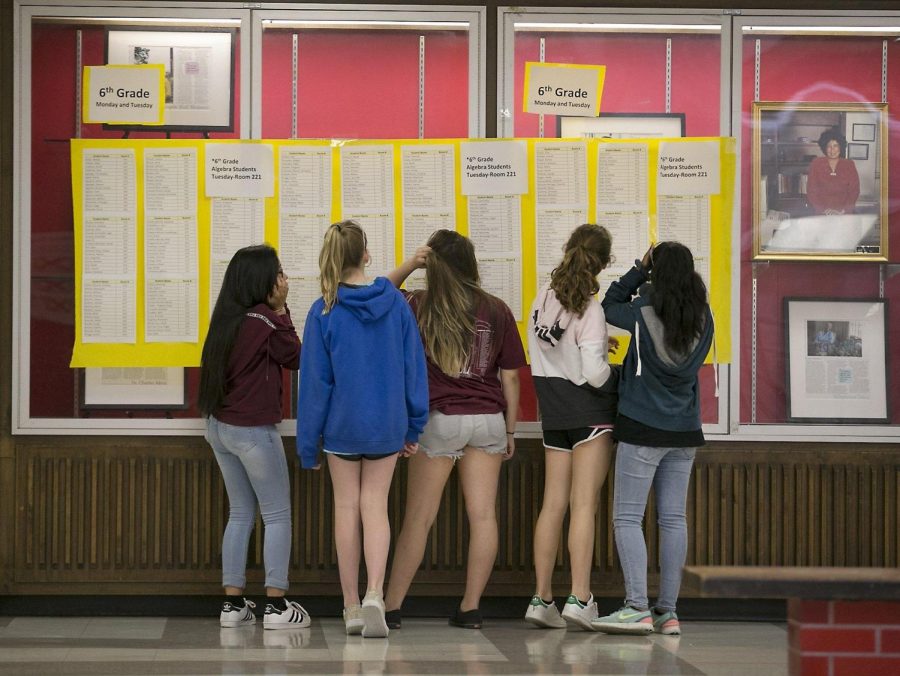 Students gather in a hallway at Kealing Middle School in 2018. Some shorts are prohibited on Austin school district campuses under the current dress code.

In 2018, the Alameda Unified School District in San Francisco eliminated their traditional dress code policy. Now allowing students to wear what they want, including midriff shirts, ripped jeans and miniskirts. The new policy only prohibits students from wearing violent, illegal, or profane images on their clothing.

Steven Fong, the Chief Academic Officer at AUSD commented on the change, stating “We believe these changes will reduce inequitable and unnecessary discipline and help us maximize learning time.”

School districts across the nation enforce strict dress codes that directly discriminate against young women. Female students are frequently chastised, embarrassed and robbed of their learning time due to these policies.

Many women can recall a time when they faced discrimination due to their attire in professional settings. Even more women can remember a time they were reprimanded in the classroom due to elaborate and unfair dress code policies.

According to the National Center for Education Statistics, 55% of public schools in America enforce dress code policies outlined in student handbooks. These policies are often very strict and directly target adolescent women and their changing bodies.

These discriminatory dress code policies have devastating effects on young women during developmental stages in their adolescence. The results include negative impacts on self-esteem, increased body shaming, and lack of confidence.

A report done by the Dove Self-Esteem Fund found that 98% of teenage girls feel an immense pressure from external sources to look a certain way. Adolescence is a time where lack of self-confidence and self-esteem become major problems. It is the responsibility of schools to protect their students’ emotional wellbeing. Altering dress code policies in schools nationwide would be a great step forward in protecting and promoting the emotional wellbeing of students. The cumulative student body would be much happier if districts nationwide adopted dress code policies similar to the AUSD.

From a young age, women learn from these dress codes that they have to conform to appease men. They are told that their bodies and choice of clothes are too “distracting” for their male peers in classrooms. This outlandish way of thinking has greatly contributed to sexism in American culture.

We see this behavior all too often in schools and other professional settings. Instead of asking men to change their perception, female students are expected to change into clothes considered acceptable to school officials. Young women are subject to victim blaming throughout their entire educational careers and often into their professional lives. Why are we blaming women for the response or reaction of their male counterparts?

While young men are participating in class, many female students find themselves sitting in a school office waiting for a change of clothes. Not only do these policies perpetuate sexism, but they also rob female students of a quality education.

Some schools have gone so far as making students wear clothes from the lost and found if they are caught breaking the dress code. Punishments like this are cruel and lead to severe embarrassment and emotional stress. Disciplining students in this way also subjects students to bullying from their peers.

School districts across the nation must reform their traditional dress codes and adopt similar policies to that of the AUSD. Nationwide changes like these would eventually result in weakened gender stereotypes, more equitable learning environments and less sexist American culture.