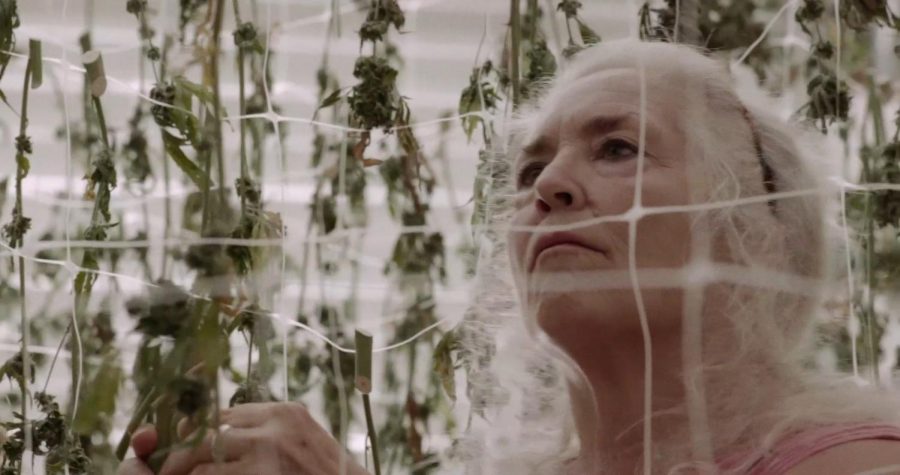 The character Devi in a still from "Freeland"

Earlier this year, the reputable SXSW Film Festival of Austin, Texas was thrown into a whirlwind of inconvenience spurred by the emergence of the COVID-19 virus in the U.S. With the original plans for in-person screenings being cancelled a week before they were slated to begin, feature films once slated to premiere at the festival were now screening virtually—an alternative that, while better than nothing, undoubtedly stilted their potential to garner critical and commercial buzz. One of these films was “Freeland,” a portrait of a northern-Californian pot-farm matriarch grappling with the imminent legalization of her product.

Luckily for Wilmington film enthusiasts and for film culture as a whole, our homegrown Cucalorus Film Festival not only selected it into its program but gave it a primetime showcase with their Curbside Cinema drive-in offering—and rest assured, “Freeland” is more than deserving of that honor.

“Freeland” follows Devi (Krisha Fairchild of Trey Edward Schultz’s debut feature “Krisha”), who’s been working in the pot industry for 30 years, as she struggles to yield what may be her final harvest with workers such as the prudent college student Mara (Lily Gladstone) and the free-spirited Josh (Frank Mosley). Both Devi and Ray (John Crave), her last friend still lingering from a distant past of pot-growing, come to terms with recent developments surrounding marijuana as a recreation and as a business in the state of California—and the resulting climax displays how disadvantageous their exploits have become over time.

“Freeland” is a film particularly interested in earthen presentation, simmering tension and a profound patience. The film allows itself to take its time to tell its story, instilling the human emotion of the characters and scenarios into the audience. Ominous music clues the reader in on the story’s dramatic progression—the story unfolds much like origami, clueing the audience in on the relationships of the central characters piece by piece.

The audience is presented glimpses of Devi’s past through home-video flashbacks—both during the opening credits and sporadically throughout specific moments of the film—that ground the film in an classic ‘indie’ sensibility while allowing the audience to connect the flashbacks to a specific time period. These are quiet, subtle moments in the film that engage the audience despite their understated nature.

The glue that holds the film together is Krisha Fairchild’s stunning performance as Devi. She imbues the character with its studious backstory; she displays the full range of Devi’s emotion—joy, sorrow, confusion, rage, fear—but she does so in a lived-in way that allows Devi to appear as a documentarian subject. It’s a brilliant performance from beginning to end, and as Devi is the centerpiece of the film, the performance plays a big role in captivating the audience.

It is a shame, though, that some of the narrative threads feel underdeveloped. Not enough of the relationship between Devi and Ray or the relationship between Devi and her workers are explored enough to achieve maximum impact upon the audience. The runtime’s singular devotion is both a blessing and a curse—if more time had been allotted to the characters of Mara and Josh, the audience would have been able to relate to the characters more deeply than without.

Nevertheless, “Freeland” is a notable film—a striking debut by directors Mario Furloni and Kate McLean in the sense that it boldly proclaims artistic intentionality. The thought-provoking film will cause viewers to consider new questions regarding the controversies that surround marijuana, its agriculture, its recreational use and its slow-but-sure legalization in America. As “Freeland” makes its way across the country at various film festivals for screening, here’s to a bright future for all of the cast and crew involved!