OPINION: “The Queen’s Gambit” is much more than a women’s empowerment story 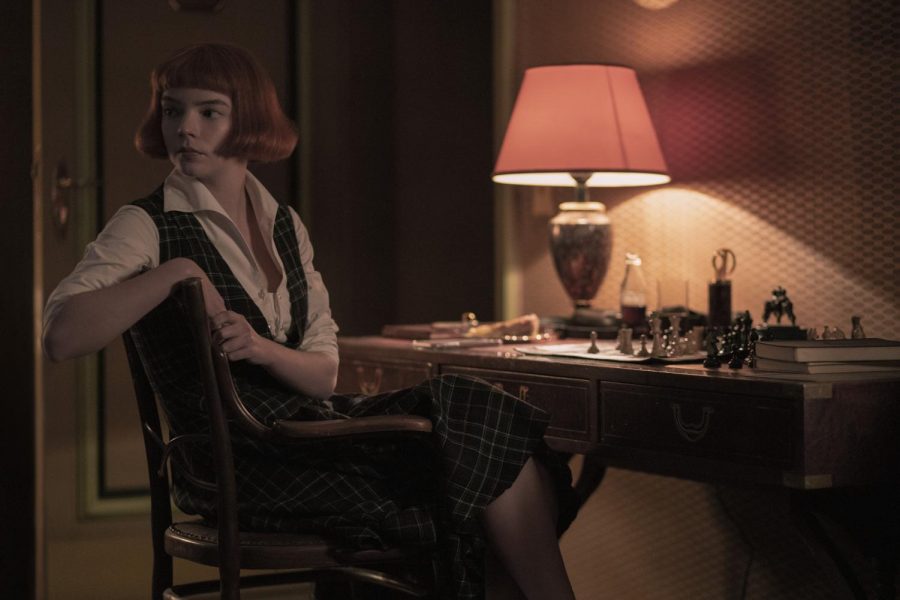 Netflix’s new limited series, “The Queen’s Gambit,” has captivated viewers since its debut in October. It has quickly become a binge–worthy fan favorite. The show follows the life of Beth Harmon, an orphaned girl who has unusual excellence in the game of chess.

Viewers get a behind the scenes look of Beth’s difficult childhood which involved parental abandonment, trauma and substance dependency. Beth is exposed to tranquilizer pills as an orphan, and she quickly becomes dependent on them for to better her chess strategies.

Beth is introduced to chess by Mr. Shaibel, a quiet janitor who plays the game by himself in the basement. Mr. Shaibel quickly realizes that Beth is a prodigy and possesses skills beyond her years. He teaches her everything he knows about the game during her time at the orphanage.

Beth eventually gets adopted by a couple with problems of their own. After her adopted father leaves the family, Beth and her adopted mother travel the country for chess tournaments. Eventually the pair travelled the globe to participate in world championships, which were historically played by men only. Beth destroys her male competitors, quickly rising to the top and dominating the world of chess.

“The Queen’s Gambit” tells a compelling story about a young girl and has deeply moving morals. However, this show is not just about the empowerment of women—it’s about showing the real destructiveness of substance dependency and how one can overcome it with the support of friends.

Beth becomes dependent on tranquilizers as a child in the orphanage. She quickly learns that she likes the effects of the pills for enhancing her chess skills. We see Beth from a young age hiding and stealing the pills to take at a desired time. This behavior as a child was the first sign of her dependency on chemicals.

As she grows into a teenager and later a young adult, Beth explores alcohol, cigarettes and marijuana. Once she became exposed to a wide variety of substance, she spiraled into several self-destructive episodes, one of which resulted in the loss of a high stakes tournament.

However, with the help of friends and a push of self-confidence, Beth drops the substances and wins her final tournament against the best chess player in Russia.

Not only does Beth’s story break the stereotype that women cannot excel in a sport like chess, but it also breaks the stereotype that emotionally damaged people cannot lead successful lives. Beth’s performance proved that these stereotypes do not correlate with ability or success. Despite Beth’s troubling and traumatizing upbringing, she elegantly made her way up in the world, with the help of others that believed in her talent.

In conclusion, while “The Queen’s Gambit” does have a strong feminist message, the underlying moral is about harnessing your inner strength, abilities and talent to succeed. The main takeaway is that you should utilize your own brilliance to pave the way to success, no matter how difficult your circumstances may be.