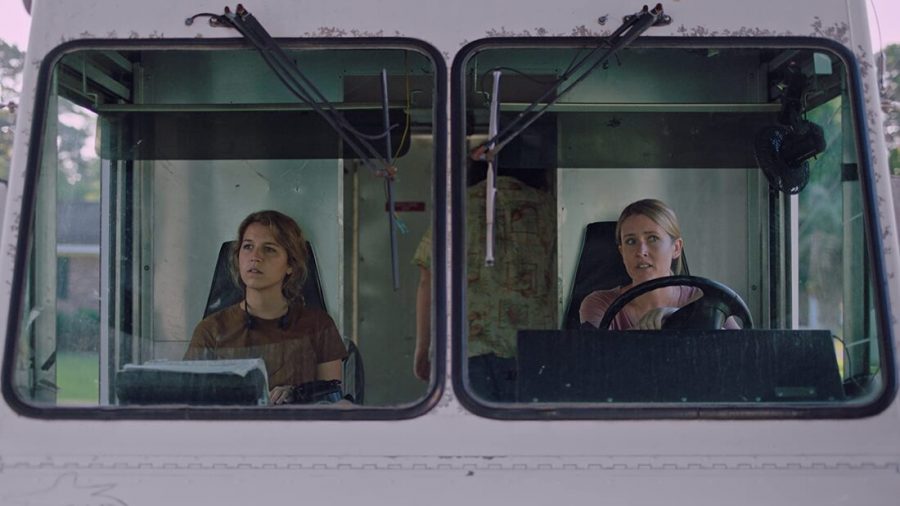 On Saturday, I had the opportunity to be a first-time attendee of the Cucalorus Film Festival right here in Wilmington. Being a student at UNCW as well as long time Wilmington lover and self-proclaimed movie fanatic, it’s needless to say I was excited. The experience proved to be so much fun, even in the uncertain times of the COVID-19 pandemic. I saw “Drought” as it played from the big, outdoor screen at Kenan Auditorium at UNCW. I found myself thinking “maybe this is how all movies should be shown”  aka in the comfort of your own car. Seeing a movie in my own home made me proud to live in Wilmington and brought a level of understanding to the film that made watching it worthwhile.

“Drought,” a movie defined by its charm, meaningful creative vision and compelling narrative of sibling love both pleasantly surprised me and gave me warm feelings towards a home I have always taken for granted. While the acting in the movie leaves something to be desired, its characters are charming and relatable. The rural North Carolina scenery is all too familiar to me, a girl who was born and raised in the exact same landscape. Between its realistic dialogue, nuanced awkwardness and charming characters, “Drought” becomes a film that warms your heart and breaks it simultaneously.

“Drought” is a film about Sam, Carl and Lillian, a group of siblings joined by Lewis, a close friend of Sam and Carl. Sam is the overprotective sister of Carl, a teen with autism. After Sam and Carl’s mom gets arrested, the absent sister, Lillian, comes home to take care of them. Due to her abandonment of Sam and Carl, the relationship between the siblings is tense. After Carl gets fired from the job, he, Sam and Lewis share, the group decides to chase a supercell storm in the middle of an infamous drought, which they do in their Mom’s ice cream truck. Over the movie, the viewers see the relationships among the characters struggle as well as grow. By the end, you may be left thinking about your own family.

What most struck me about “Drought” was that it is well written. Its plot digs deep into the realities of siblinghood and friendship, but the acting does not bring the depth needed to support this complex plot.

The characters, while endearing and engaging, felt inauthentic due to the novice level of acting. The actors did not come off as genuine, but more like they were playing a part. The dialogue did not flow smoothly. The chemistry between the characters of Sam and Lilian played by the film’s directors Hannah Black and Megan Peterson, especially, was lacking. The writing had potential, but that potential, unfortunately, was not fully achieved. Despite this, however, the acting actually adds to the effect of the movie by exposing its weaknesses and making clear its strengths.

The value in the movie lies in its intricate writing about siblinghood.

Sam’s protectiveness over Carl, the tension between Sam and Lillian, and the underdeveloped relationship between Carl and Lillian touches on aspects of siblinghood which strongly define it. Siblings have a unique relationship in that they know each other better than anyone. They have usually shared their entire lives which creates a bond that cannot be broken. Even through conflict, sibling love remains constant, even if the siblings do not realize it. This love is one of the strongest loves to exist and that is what this movie is about.

The movie is certainly worth watching. If you have siblings or don’t, if you have a “normal” family relationship or don’t, either way—”Drought” will definitely make you laugh, maybe even make you cry and surely unexpectedly delight you. The film is in its beginning stages as far as screening but has hopes of being screened at festivals across the country in the upcoming months. Keep a watch on this one to see how it grows.