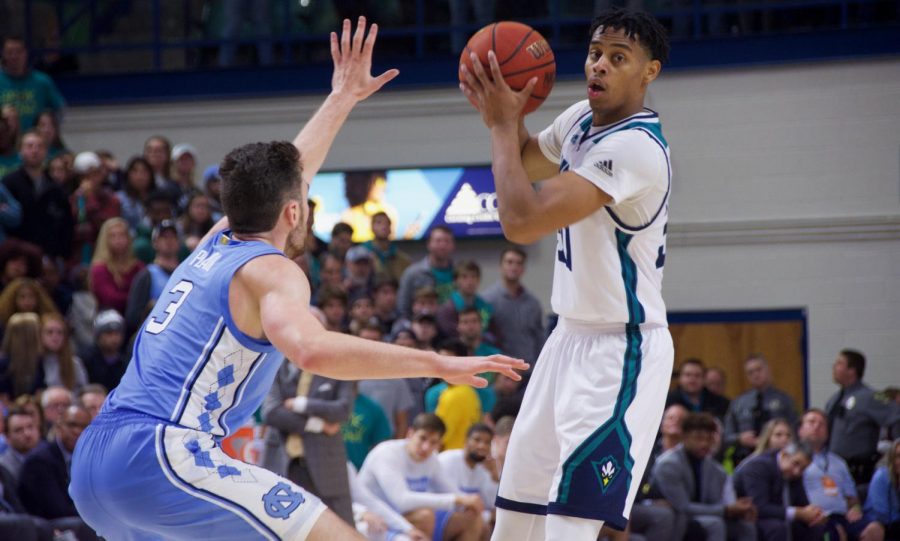 Jaylen Sims is guarded by Andrew Platek (3) during UNCW's matchup with North Carolina on Nov. 8, 2019 at Trask Coliseum.

WILMINGTON – In a poll conducted by the Colonial Athletic Association’s (CAA) head coaches, media and communication professionals, the UNC Wilmington’s men’s basketball team has been picked to finish eighth in the conference standings ahead of the 2020-21 campaign. Junior guard Jaylen Sims also received a preseason Honorable Mention.

The Seahawks are selected to finish behind Hofstra, Delaware, Drexel, Towson, Elon, Charleston and Northeastern. UNCW’s eighth-place preseason standing has them ahead of James Madison and William & Mary before the upcoming season.

Sims returns to UNCW as the Seahawks’ leading scorer from last year, averaging 11.8 ppg. Sims also led the Seahawks in three-point attempts with 62 and finished the season shooting 35% from behind the arc.

Sims and the Seahawks will get behind their new leader Takayo Siddle who was hired as the new head coach on March 13, 2020. Siddle moved back to the Port City after serving as an assistant coach at NC State under Kevin Keatts who led the Seahawks to back-to-back CAA titles in 2015-16 and 2016-17.