REVIEW: The controversy of “Borat 2” 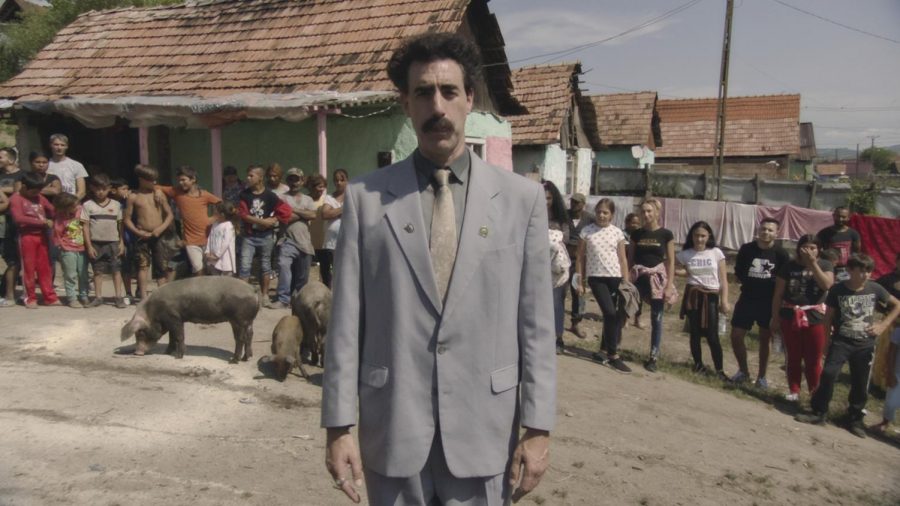 Presenting itself as offensive and satirical as ever, “Borat Subsequent Moviefilm” (2020) provides an effective and brilliantly laughable look at the current United States of America on a journey with Kazakhstan’s most bigoted, yet hilarious journalist.

Fourteen years after the recording of his cross-country antics in America, we’re re-introduced to Borat Margaret Sagdiyev (Sacha Baron Cohen). He has been disgraced, shamed, and imprisoned by his government for humiliating them with his actions from the first film, “Borat”—a mockumentary film which saw a bumbling reporter from Kazakhstan travel to America and get up to all sorts of hijinks, such as chasing down celebrities, bringing unwanted guests to dinner, and fighting naked through a crowded hotel.

Akin to how the original film initially garnered criticism for its over-the-top portrayal of Kazakhstan and uproar from its participants, the sequel follows in suit with the exploration of themes like prejudice, misogyny, conspiracy theories and the ideals of notable political figures. As a film so immersed in today’s political atmosphere, it reads almost like an exposé of sorts on today’s political landscape.

In the opening of the film, Borat is released and tasked with the responsibility of traveling to America once again, to deliver a gift to President Trump and restore Kazakhstan’s reputation. Taking it upon herself to join Borat on his mission is his teenage daughter Tutar (Maria Bakalova) who then becomes a pawn that Borat sets out to use in the service of his mission.

Together, the pair embark on a journey filled with humor, discovery, and get to drum up quite a bit of controversy while they’re at it.

As Borat’s character is shown to be embracing of such taboos, viewers get to see how this may play out in Tutar’s development and whether or not she can deviate from her father’s view of things. Additionally, in what’s already become one of the film’s more infamous scenes, Trump associate and former New York mayor, Rudy Giuliani is caught on camera doing what most have said is a very inappropriate and questionable act.

The film and its promotional material have shown just how vulnerable the Trump administration can be as Borat and Tutar are able to gain access to interviews and much more without even having to display much in the way of credentials.

Controversies aside, the performances of Cohen and Bakalova are a highlight of the film. In comparison to Cohen’s other skit characters, like Ali G and Bruno, Borat is the character most known to US audiences. Even after a 14-year absence from the big screen, as well as a brief retirement by Cohen himself, Borat proves to still be an effective character as of today in his interactions with ordinary non-acting citizens, crude humor and idiotic tendencies. A lot of that is owed to Cohen’s dedication to the part and how he weaponizes the role to expose bigotry and prejudices in other parties.

As a relatively new face to Western cinema, Bakalova’s performance is just as riveting and engaging as Cohen. One of Bakalova’s greatest strengths as Tutar is that she makes the character her own, without ever making it seem like she needs to rely on Borat to seem relevant or important to viewers. Regardless of if or whenever the two are on screen together, both performers are able to stand on their own with strong comedic timing and true dedication to the inventiveness of their respective characters.

An aspect that some might notice changed from the original film is that it seems more like a movie this time rather than a documentary. This shift takes place due to the new story elements, particularly the relationship between Borat and Tutar. While the grounded-in-reality feel of the first film is gone for the most part, the sequel does well in showing the candid and favorable or unfavorable views of the “real people” within the film.

In short, while some of the charm (or lack thereof) from the original film is lost, it’s sacrificed to further drive home the relationship and themes that the film sets out to portray.

“Borat Subsequent Moviefilm” proves to be a great film that yet again showcases relevance and social commentary on the U.S., even though it doesn’t quite surpass the brilliance of its predecessor.

As political tensions have racked up for the better part of the year, Borat acts as a guide of sorts to give viewers a satirical yet expository view of how politics have shaped the current state of America. And as a side note, it acts as a comical, albeit offensive, flick that delivers some much-needed humor, carried by the duo of Cohen and Bakalova, to those who are up for it. Simply put, in the words of Borat, “Great success!”