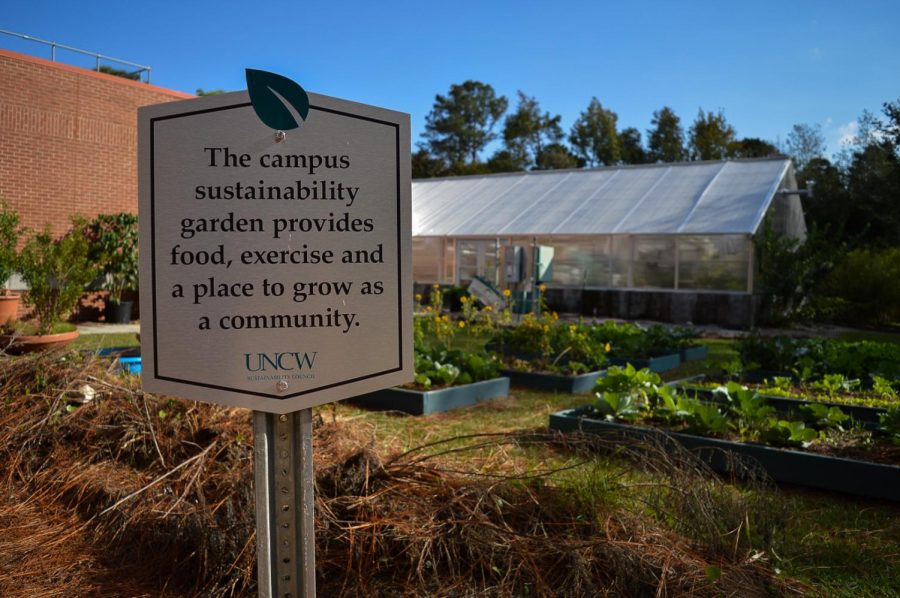 The Greenhouse and garden operated on UNCW's campus.

Headed by Kat Pohlman, the Chief Sustainability Officer, the climate resilience and action plan team made up of faculty, students and staff are in charge of creating and presenting this plan to the university.

“One of the only silver linings that I’ve seen during this pandemic is that I have been able to crash other school’s meetings,” Pohlman said. “So I asked Appalachian State if I could be apart of some of their conversations. Just to hear how they run meetings and the general vibe and culture knowing that it would be different and see if I could incorporate any of language they used or something like that nature.”

Within these six areas, students from Dr. Weaver’s summer 2020 Environmental Writing class, as well as those within the Office of Sustainability, outlined specifics ways in which UNCW could achieve climate neutrality and zero carbon emissions by 2050.

“I didn’t want this to just be what can we do to stop climate change because we sort of have that plan already, but we need more,” Pohlman said. “We also need how do we prepare for the inevitable effects of climate change that we are gonna see because that’s the way the world is going.”

What makes UNCW’s plan so different from others is that it is mostly written by students.

“We really want it to be student involved,” said Carly Jarvis, an intern in the sustainability office. “It’s differentiating ourselves from other universities in that the students are writing it. It’s not some business person who doesn’t even step foot on campus. Which I think has made it really special.”

Pohlman said the team’s goal is to complete and present the plan to the Chancellor’s Sustainability Committee by May 2021.

“I wanted to make sure that all of our documents and everything were updated by the summer for when we start sending out invitations for the appreciative inquiry next fall so that people could review all of the documents before they came to the summit,” said Pohlman.

The appreciative inquiry summit next fall was inspired by a course Pohlman recently took, MPA 526 – Sustainable Cities, where this concept was introduced.

“The city of Cleveland actually did this new-age way of working with organizations to find your strengths in order to actually make change instead of bringing people together for a conference to talk about things,” Pohlman said. “It’s called appreciative inquiry and I don’t think anyone’s done it at UNCW on a wide level, but obviously sustainability, because it does touch so many areas is one of the perfect topics for what we’re gonna call a summit.”

She added that the inspiration for this action and resilience plan came from looking at other universities’ plans and recognizing the need for one at UNCW.

Following the writing partnership between Dr. Ian Weaver’s class and the sustainability office this past summer, students like Jarvis wanted to continue lending a hand in this project.

Jarvis’s called it a twist of fate in how she was able to find a way to stay involved.

“Thanks to COVID-19 a lot of my internships had gotten canceled for the summer,” Jarvis said. “But it was okay because this opportunity kind of presented itself. So I emailed Kat and was like hey I just want to get more involved and we set it up and I’m working as the intern on the project.”

Some of the next steps for the plan include holding an open forum to get more feedback and get a couple more sections written and reviewed. The open forum was held on Oct. 30.

“It’s very difficult in sustainability, in general, all over the world to show support,” Pohlman said. “So having a numerical support system is really important for us.”

To take the pledge, read the full plan and see upcoming events you can visit the sustainability page on UNCW’s website.

“We’re always excited to hear from different students and we really want people to step up and say hey I’m interested,” Jarvis said.