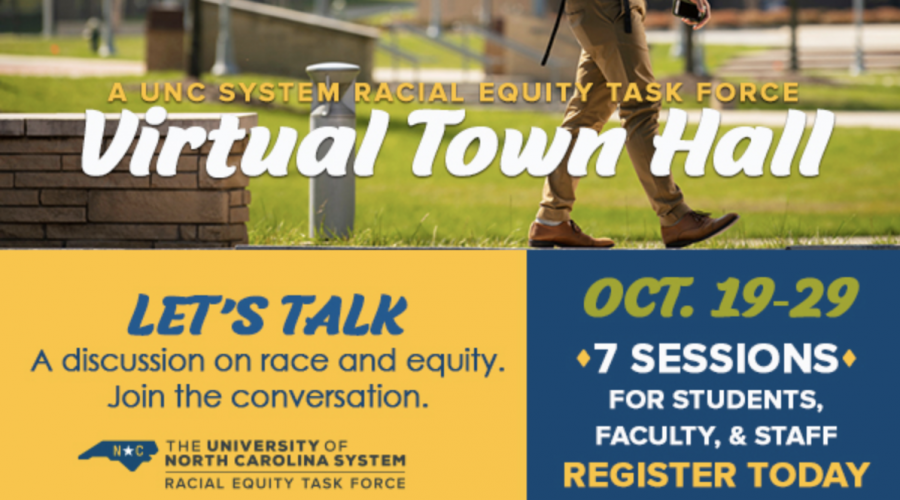 On Oct. 27 the UNC System held one of the several town halls for respective students to discuss race and equity. These open forums were a follow up to a previous survey they had sent across campuses to get a better feel of the climate of race and equity at various UNC System universities.

During the town hall, which was facilitated by several members of the UNC System Racial Equity Task Force, students were able to anonymously share their thoughts and ask any related questions as well as respond to posed questions.

“These town halls will be a space to discuss and share ideas around racial equity at your institution and in the UNC System,” per the registration page. “Attendees will also have the opportunity to share thoughts anonymously during the town hall. Faculty and staff will have opportunities to join separate town halls tailored to their areas of interest as well.”

Following questions posed by the facilitator, Brandon Neal, attendees were allowed to anonymously respond before hearing from one of the several student contributors from the task force present.

The first contributor to share his experience was by Aj Modlin, a senior from East Carolina University (ECU).

“Overall at East Carolina University, we have been able to make a lot of great progress with ensuring that our community understands each other,” Modlin said. “While we are a predominantly white institution (PWI), we make sure that we embrace all the different cultures that we have on. We frequently have various NAACP marches in order to help bring together the community. And with these communities, it doesn’t seem like a racial divide within the institution. You go to these different marches and it’s a mix of all ECU students, white, Black, Asian Americans.

But one thing that over the course of my life I’ve been able to see is that as a biracial male is it is hard finding your position in any situation. A lot of people are like, Oh, do you want to go hang out with the African American people, or the white people and it’s a tear that a lot of places cause you to have. But at ECU I never had that sense, or that feeling. Within the UNC System, I feel that we’ve been able to melt together.”

Next, Brodrick Johnson, a student from UNC Greensboro (UNCG), shared his experience with microaggressions at his campus. Johnson said as a double major in African American Studies and political science he feels “more hypersensitive to microaggressions.”

“However I can say that at the University of North Carolina at Greensboro, we have been doing the best that we can to initiate conversations between students and faculty members and staff,” Johnson said. “I was able to be a part of a conversation with faculty and staff about diversity where it was mandatory for the different departments to come in see it. However, there are microaggressions that come into play that students may not know the reason behind it so I think that that’s definitely something that we as the university can work on.”

Johnson is referring to an incident that occurred on campus several years ago involving a fight at a party where one student died resulting from their injuries.

During a follow-up, something Modlin said he wishes other students knew about his experiences is not to assume anything and to not be afraid to ask questions to better understand.

After a few other remarks, Neal shifted topics to the relations with campus police following a question from the chat.

Modlin had his own thoughts on how he thinks campus police should operate.

“Any police at any university should not be here to end your career or end your education,” Modlin said. “Their job should be to provide an educational experience for you to see what happened, what you did wrong, how can you correct it. There should be no spate and they should be there to protect you from any outside entities. So any campus police should not have any intent to arrest somebody every night, should not have any intent to hurt a student or anything of that nature they should all have the mindset of, how do I help the student get through this issue, or teach them where they went wrong.”

Next, Jade Jones, a graduate student from UNC Wilmington, (UNCW) gave her advice about how to better equip people to deal with mental health.

“You need to listen and accept the fact that you’re not going to always understand why someone is feeling the way they feel and why something is affecting them in a certain way,” Jones said. “That goes for white people, Black people, brown people. As far as mental health I have gone to our health services with my problems with whatever I was communicating and be completely dismissed. And that’s not just a me thing that’s a multiple people thing. So it’s just kind of like you’re ignoring me, you’re making me feel little and not actually accepting what I am saying what I’m feeling and you’re not acknowledging that and not doing anything to help me get past that.”

Nic Brown, a student from UNCSA, also offered advice to the same question.

“Do your research,” Brown said. “Try to facilitate conversations with students, specifically student leaders like RAs and other student leaders and clubs to get insight into what they’re doing and how it’s affecting them and their mental health. I encourage you to facilitate that conversation but, it’s really important to listen because you all are in a higher position.”

In regard to a question posed about how students have handled their mental health regarding recent major events like the death of George Floyd and Breonna Taylor, Johnson shared his experience at UNCG.

“What I’ve been seeing is like yes, it’s the George Floyd’s and Breonna Taylor’s, it’s COVID-19, but it’s all also other things on top of that,” Johnson said. “I think sometimes people forget that, yes, we’re living through all of these worlds, but we still have everyday things going on too. We still have to turn in assignments, bills are still due, we still have to write papers. And so, in conjunction to all of those things I’ve seen a lot of Black organizations or Black leaders cracking down, and they’re having those mental health issues because when you combine all of those things together it’s just a lot.”

Another priority topic discussed was about access and representation among UNC system faculty and staff. Neal said that the survey recently sent out by the task force revealed one to three students of color, feel that their background is rarely or never represented by someone in leadership, compared to about one in 20, white students — data results from this survey will be shared along with the Task Force recommendations in December.

Johnson said that his thoughts and experience changed on this going from early to higher education.

“I went to historically black schools so, I was more accustomed to seeing people who look like me in the classroom, growing up,” Johnson said. “That changed because now I’m in the political science department and African American Studies program. I have one set where all of my teachers are Black, and then I have another set where all of my teachers are white. So, it’s very interesting to see that unfold in the conversations that we have in class.”

Johnson added that he has more discussion on current events in his African American Studies courses versus his political science ones.

“My mind [changed] when I was in my first African American Studies course and our professor proposed a question,” Johnson said. “What does it mean to be Black in America, and the responses that he got was it may be ugly, it meant to be harassed, it meant to be chastised, it meant to be just all of these bad, not bad answers, but sad and melancholy answers because during that current time we were facing the Tamir Rice situation and that was the first kind of round of police brutality protests within this decade. After that class, I made it my mission to turn the tide after hearing an auditorium full of Black students talking about how this was their experience of what it meant to be Black in America.”

According to Neal, nearly a quarter of students of color feel they are rarely or never a part of the community. He then asked if within the college if there are programs on their campuses that have worked at setting up marginalized students for success in school and beyond?

“I never did truly feel like I had a group here like I didn’t feel like I had a community,” Jones said. “Once I got into my major I had that kind of community but as far as like Black student community, I didn’t really feel like that was a thing. Going to the Upperman Center I got to sit and interact with Black students, and yes that was cool, but because they weren’t in my everyday activities, it didn’t quite feel the same. Like I saw them in passing. I would occasionally go up there and hang out but at the same time, I still have to go to my study groups I still have to go to my classes so it never truly felt like that was my place either.”

Jones went on to say that while UNCW does have several cultural centers she is not sure if they truly meet the goal they are expected to.

“I appreciate the step in that direction,” Jones said. “That should be something that every school has, whether it be a PWI or whatever, there should be an area where people are able to commune and feel like that’s where they’re a part of.”

To end the town hall, each student chose a word to describe how they felt at the end of this discussion.

The second town hall will be hosted Oct. 29 from 6:00 to 7:00 p.m. and registration is required. Students can register here.

“The purpose of these several virtual sessions is to have the taskforce actively listen to your experiences, your ideas and or questions from students, faculty and staff about race and equity in the UNC system,” Neal said. “Feedback from this event will be used to inform the task force recommendations to the Board of Governors and the UNC system office. Our priority is to elevate as many students, staff and faculty voices, as possible.”