Biden and Trump face off in final debate 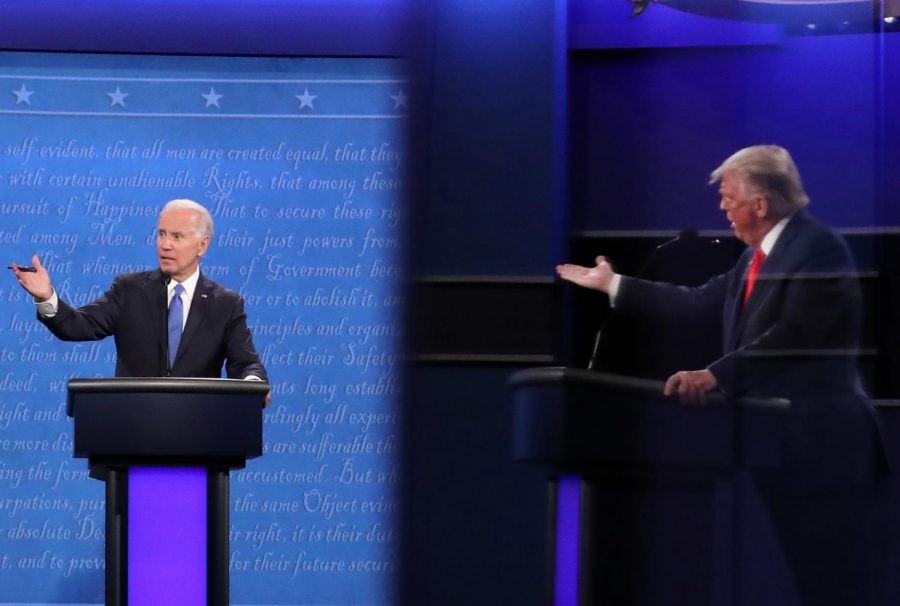 Democratic presidential nominee Joe Biden and U.S. President Donald Trump, shown in a reflection, participate in the final presidential debate at Belmont University on October 22, 2020 in Nashville, Tennessee. This is the last debate between the two candidates before the election on November 3. (Chip Somodevilla/Getty Images/TNS)

The final presidential debate of the 2020 election took place on Oct. 23, just twelve days before the election. The second debate, in what was supposed to be a series of three, was held at Belmont University in Nashville, TN.

After a combative first debate, the CPD was concerned about the possibility of repeat and set new rules for the conduct of the participants during the event.

“Each candidate will have two minutes uninterrupted to answer my first question. The debate commission will then turn on their microphone only when it is their turn to answer, and the commission will turn it off exactly when the two minutes have expired. After that, both microphones will remain on, but on behalf of the voters, I’m going to ask you to please speak one at a time,” said Welker.

The coronavirus (COVID-19) response and the dire situations of both lack of employment and healthcare American families now find themselves in because of the pandemic were the primary focus of the evening.

Welker’s asked both candidates to outline their plan to handle the future of the pandemic. Trump stated that he has handled COVID-19 well because the U.S. did not reach 2.2 million deaths predicted and has been “congratulated by heads of many countries.”

“The model” released in early March from Imperial College London, came as a worst-case scenario estimation of what could happen if the U.S. continued to take no action against the virus.

“We’re learning to live with it. We have no choice,” said Donald Trump.

Back in Mar. Trump made similar comments.

“He says we’re learning to live with it? Come on. We’re dying with it because he never said its dangerous… and you say, I take no responsibility,” said Biden.

Trump was quick to fire back.

Biden jumped back in to respond.

“No, I don’t take responsibility at all. Because we were given a — a set of circumstances, and we were given rules, regulations, and specifications from a different time,” said Trump on Mar. 31 in the White House Rose Garden press conference when he finally declared a state of emergency.

The debate, notably calm compared to the first, due to the command of  Welker still had its moments.

Trump leveraged himself as the best thing that has happened to Black Americans since Abraham Lincoln. He praised clean cages where children are stored when Biden pressed him on Trump’s child/parent immigrant separation policy at the U.S.-Mexico border.

He accused Biden of hiding in a basement during the pandemic. And finally, the President criticized Biden’s son’s relationship with the Ukraine energy company Burisma, a tactic the Trump campaign warned they would highlight during the debate.

Earlier in the week, the New York Post released an article containing emails “allegedly” sent from a top executive at Burisma to Hunter Biden. The Post reported that the emails originated from a laptop they received from Trump’s attorney, Rudy Giuliani.

“I don’t make money from Russia, you made $3.5 million Joe,” said Trump referring to the unverified information the Post reported on in the emails.

Biden has released his tax returns for the past decade that uncover all the sources of his income to date; Trump, who has released none of his returns, accused Biden of being given 3.5 million dollars from the Ukraine government and using his political office to benefit his son.