The reality of student workers during COVID-19 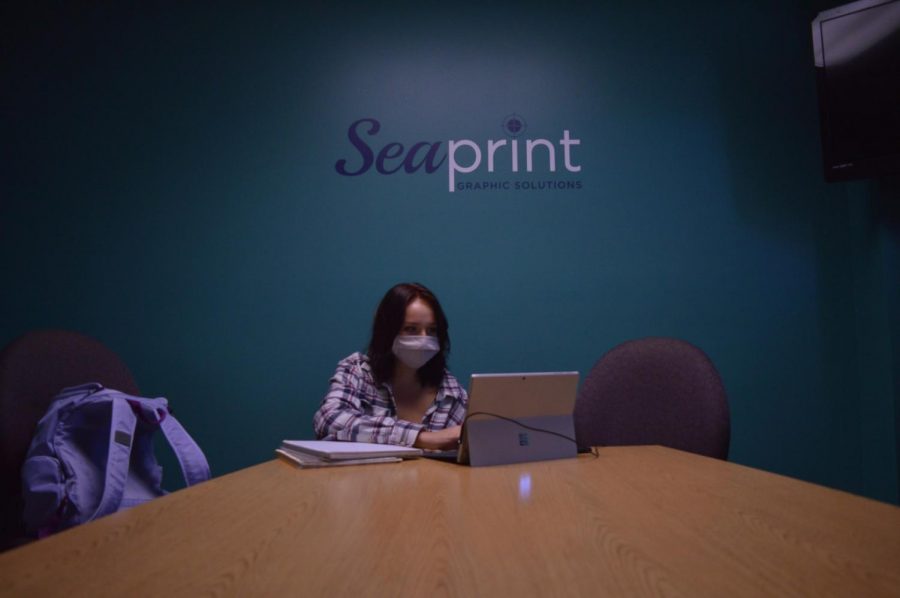 Gracie Hocart, one of the print shop's student workers.

During the coronavirus (COVID-19) pandemic work and employment has been hectic and ever-changing. Many workers were laid-off, furloughed and countless are unemployed to this day. Yet, some have been lucky enough to get or keep a job.

UNC Wilmington (UNCW) allowed students back on campus in Aug., and along with that came student workers. Student workers are those who work for the school on campus, some under a Federal Work-Study which helps pay tuition and others work just for pay.

Alice Wells, a senior at UNCW, and Gracie Hocart, a freshman at UNCW, both are student workers at the print shop on campus. Wells makes $8.50 an hour while Hocart makes $8.25 an hour. Both Wells and Hocart work about nine or 10 hours a week and they only get paid once a month.

“It’s my understanding that we [student workers] are not eligible for hazard pay because the pay comes from an allotment from an award,” Wells said. “So we would have to talk to financial aid about getting more money from that award as hazard pay.” (The Seahawk reached out to several people and departments about this and none responded in time for print.)

Hocart nodded along in agreement.

“It was our choice to work,” said Hocart. “And if we received hazard pay we would not be able to work as much [because workers would use up the allotment faster].”

However, both students agree that the pandemic has cut hours back drastically and by the end of the month, they have not made enough money to cover any sort of bills. Hocart has even begun to consider finding a second job to make up for the lack of income. However, she is struggling to find anything off-campus. Wells agreed and added that it would be horribly hard to balance two jobs, school, an internship and any other activities.

Yet, Wells and Hocart believe they would make more money working off-campus. While off-campus jobs may offer more hours and thus more pay, there are benefits to working on campus, such as having a schedule that conforms to your school schedule.

“If you have a monthly payment [it may be best to work off-campus],” Wells said.

Each type of work has its own positives and negatives, it just comes down to what an individual needs.

When full-time faculty and staff are considered, Wells and Hocart believe that some of those workers should be receiving hazard pay. Like those working in housekeeping, food-service workers and Galloway since they are in high-risk areas.

As of July, according to an article written by Joe Killian, UNC system workers have been kept relatively out of the loop, are not receiving hazard pay and have had to obtain their own personal protective equipment (PPE).

According to Christina Schechtman, a media relations specialist for UNCW, during the time period of April 1 through May 31 permanent workers received “pandemic pay.” During that time as well student workers were paid even if they could not work. It should be noted that no employees currently receive “hazard pay” or any form of extra pay because the state has moved into phase three, which did not meet the requirements for a pay increase.

In reference to working in the print shop, the students believe they are not in a high-risk situation. There is plenty of space and offices for people to spread apart. Overall, Wells and Hocart suggested that hazard pay should be dependent on the amount of risk the work area is determined to have.

“This probably should have been all online anyways since that’s what it turned into,” Wells said.

However, some students still prefer being on-campus, or they had no other option due to housing contracts, in-person classes or work.

“Yeah, I have not been to an in-person class in a month because of a risk, but I still wanted to live on-campus,” Hocart said.

Both Wells and Hocart said that they were aware of the risks of coming back to campus and working, but chose to do so either way.

COVID-19 has cut back student worker hours, allowing students to work around 20 or 30 hours in a month and only receive around $200-$300 in that month. Hazard pay would make up for that disparity in pay since the pandemic, but that may not be a possibility for student workers. Some may even feel that hazard pay is not necessary as perhaps their job is not necessarily high-risk in their opinion.

This has been a difficult time for most. It is new and confusing, there have been many losses and businesses and people have been struggling.

“The school may be losing money,” Hocart said. “But so are we.” This is not a one-sided ordeal.