REVIEW: ‘Emily in Paris’ is the show we love to hate 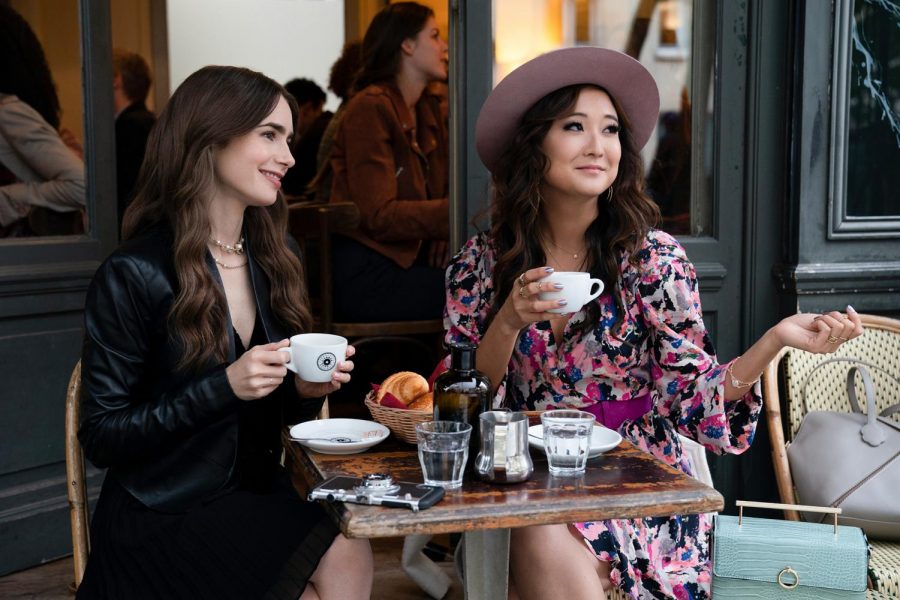 The new Netflix series “Emily in Paris” begins with Emily, played by Lily Collins, jumping at the chance to move from Chicago to Paris in her pregnant boss’s stead. Her boss, Madeline, is unexpectedly pregnant—a result of enthusiastic preparations for life in Paris. Seems unlikely, right? This plays out in the first five minutes of the first episode. Never mind that Emily doesn’t even speak French and has only 48 followers on Instagram, even though her job is literally to be a marketing manager. The show seemingly takes place in a simulation, and our player is thin, white and conventionally beautiful.

The 10-episode series can best be described as a frothy ode to Millennials and an American ideal of Paris. If the show’s creator, Darren Star, known for “Sex and the City,” sought to create a fantasy experience completely removed from the realities of being a 20-something abroad in Paris, he succeeded with flying colors.

The Paris of “Emily in Paris” is built on ‘la vie on rose’ stereotypes and Parisians are portrayed as overtly sexual, lazy, or rude. It’s little wonder why so many French critics tore the series apart.

Character-wise, Emily’s newly made friend, disinherited heiress/nanny/aspiring singer Mindy Chen, is much more relatable and intriguing than Emily. Emily herself acts as a bland and obnoxious American traipsing through Paris and taking selfies. Instead of trying to learn French, she gleefully pulls out Google Translate and her French coworkers end up switching to English just for her. The most notable is her lacking social media skills. The pictures and awkward hashtags she posts don’t seem typical for a 20-something at all, yet Emily continues to gain followers rapidly.

Yet despite the show’s lack of substance, it’s popular.

Fans on Twitter have hate/love relationships with it, and even though most of them contest to the cringe, they’re hopeful for a second season. The reason is straightforward: in the midst of so much uncertainty and stress, escapism is the perfect healing balm.

Emily in Paris is honestly very fun if you just want to turn off your brain and immerse yourself in the same unchallenging non-jokes and slightly embarrassing earnestness of like, a cosmogirl! magazine from 2005

Emily posts this pic on her Instagram and gets 20,000 new followers. #EmilyInParis pic.twitter.com/T5gKjA54BI

In an interview for a Bustle article on the ‘Emily in Paris’ phenomena, clinical therapist Caroline Given offered her expertise.

“The polarizing views on Emily in Paris reveal a lot about how people respond to crisis and chaos,” she says. “It’s undeniable that in America we are experiencing a time of upheaval and while there are a variety of ways to cope with that, I believe the two major cognitive inclinations are towards either escapism or reality confrontation.”

Escapism has become a means for dealing with the stress of the pandemic and the state of the world today. It has lead to increased online home shopping, isolated traveling and shows like “Emily in Paris.” They’re little bubbles of time where you can put away your stress and anxieties.

But despite the need for respite from the weight of the world, it doesn’t seem plausible to actually escape via “Emily in Paris.”

All of the elements of social conflicts are embedded in the show. Indeed, the bulk of the main characters (and all of Emily’s many admirers) are white. The full scope of Emily’s character depends on her whiteness and beauty. No effort is made to probe beyond this; we never get emotional insights or learn about her background, and the ease with which she succeeds in the show solidifies her privilege

The conflict in “Emily in Paris” is almost nonexistent. There are no social issues to worry about, no racism, climate change, or financial insecurity—just baguettes and bliss.