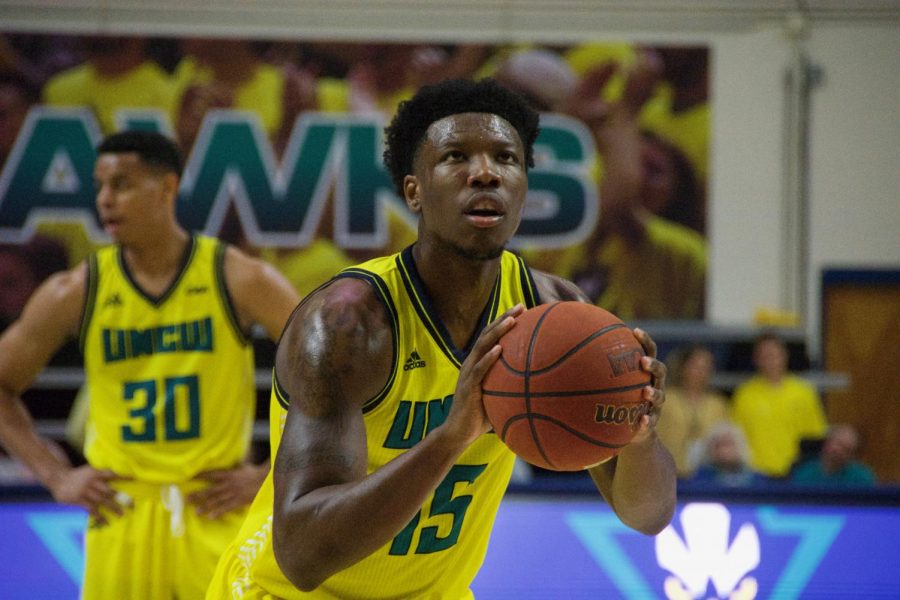 Devontae Cacok (15) attempts a free throw during UNCW's matchup with Northeastern on Feb. 14, 2019

WILMINGTON – Devontae Cacok and the Los Angeles Lakers watched the purple and gold confetti rain from the heavens above late Sunday night, Oct. 11, after a convincing 106-93 victory over the Miami Heat. Cacok becomes the first UNC Wilmington alum to win an NBA Championship after defeating the Heat in six games in the NBA Finals.

The former Seahawk played in one game for the Lakers on Aug. 13 against the Sacramento Kings in which he scored six points and grabbed five rebounds. Cacok spent most of his time with the Lakers’ G League affiliate, the South Bay Lakers. As a member of South Bay, Cacok averaged 19.4 points, 11.9 rebounds and 1.1 steals in 33 appearances. This stat line earned Cacok two NBA G League honors — All-NBA G League First-Team and the G League’s All-Rookie Team.

The double-double machine signed a two-way contract on Dec.11, 2019, officially making him a member of the NBA’s most historic franchise. Cacok finished his first season with the Lakers by hoisting the Larry O’Brien trophy at the end of the NBA’s restart in Orlando. This championship marks the 17th NBA title in Lakers franchise history, tying the Boston Celtics for the most Championships by an NBA franchise.

Cacok will need to make more room in his trophy case at home. His 2020 NBA Championship ring will join the numerous awards and championships that he earned during his time at UNCW including back-to-back CAA championships in 2016 and 2017.