UNCW’s Coastal and Ocean Policy program: a means for students to put their degrees to action 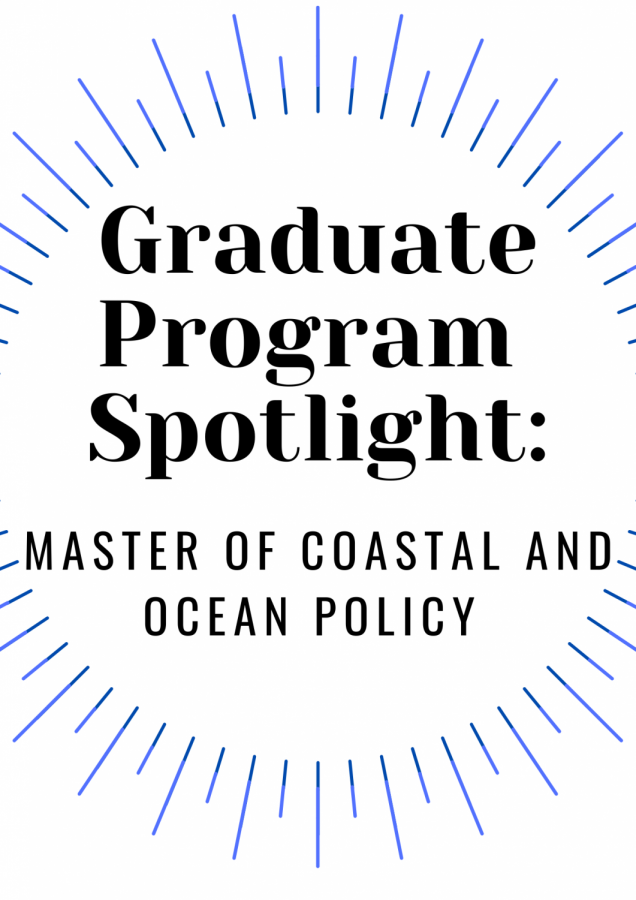 As we continue to notice the rapid impact of climate change on marine ecosystems, the need for ocean conservation is vital to maintaining our breathing earth. For students looking to use their degrees beyond the classroom, UNCW’s master’s program of Coastal and Ocean Policy at UNCW (MCOP) is structured and grounded in ideas meant to further the restoration of coastal and ocean resources. Through this interdisciplinary program, students can understand and delve into the importance of science in decision making as well as understand the scientific impact of climate change on the world.

“This program immediately grabbed my interest because I thought ‘here’s how I can learn how to translate all of this knowledge that I have and actually understand its political importance and how to incorporate it into things like planning and public administration,’’’Rachel Baker said, a current student in the MCOP program.

The non-thesis program was created with the intent of weaving science and policy together so students can purposefully change the communities they live in.

Dr. Jennifer Biddle, the new director of the MCOP program, shared her goals for its existence:

“My primary goal for this program is to develop student skillsets and knowledge so they may have a positive impact on how we manage our coastal resources moving into the future. MCOP graduates are employed by all levels of government and private enterprise working to maintain and restore coastal ecosystem services and build resiliency in coastal communities.

Additionally, my goal is to build a strong alumni network. MCOP student cohorts tend to be closely-knit as students share in the lessons, challenges and experiences the program offers. Many of our alumni have helped graduates gain employment after graduation. We involve our alumni in program events, classes and decision-making. I believe a strong alumni-student connection is crucial for the development and growth of the program.”

According to the Report on The Implementation of The National Ocean Policy, a healthy and safe marine environment is crucial to a healthy economy in the United States and a crucial part of maintaining life itself. Both humans and animals rely on a healthy ocean. The ocean itself produces 70% of the oxygen we breathe as well as 97% of the world’s water supply; Phytoplankton alone produces 50% of the oxygen we breathe.

Paul Willeboordse, a graduate student who now works as a First-Year Admissions Coordinator at UNCW, helped write a large grant to preserve the Old Baldy Lighthouse on Bald Head Island.

Willeboordse shared his thoughts on climate change and the ocean:

“I believe its sometimes difficult to garner attention for a very real threat. But the ocean is certainly changing, and it’s arguably because of the ocean that we haven’t seen more volatile changes on land. Slowing these changes is possible, especially if the global carbon footprint can be reduced. Switching to energy production (renewables, nuclear, etc.) with severely less carbon emissions would be a huge step, as well as dramatic increases in “clean” automotive energy, such as electric (provided the electricity is coming from good sources) or emerging technologies like hydrogen or biofuels.”

The ocean is connected to us and plays a big role in maintaining our quality of life. For years, scientists have worked to uncover the vast world beneath the ocean’s surface, a world we rarely even consider when we swim in its waters or watch the waves chase each other to the shore on family vacations.

Burning fossil fuels and greenhouse gases add to rising water temperatures, which is something that runs rampant around the U.S. Yet the effects on the ocean are rarely considered by those who are being paid to create energy from fossil fuels.

As written on UNCW’s MCOP website Haint Blue, the conflict between consumption and conservation fuels more controversy of the closures of Marine Protected Areas—areas around the world that are set aside for long-term ocean conservation and research.

According to the International Union for the Conservation of Nature, 1/3 of the ocean lies within national boundaries of coastal states while national waters maintain higher levels of marine biodiversity. To protect the oceans, continuing efforts made by MCOP students who continue to do research as well as scientists are driven to protect national waters and maintain the marine ecosystem that connects us all.

“It is important now more than ever that there are professionals in the field who can understand the scientific research behind coastal issues,” Baker said of the MCOP’s growing relevance, “but also understand the mechanisms behind coastal management, policy analysis, environmental economics and so on, and know how to successfully implement change needed in our oceans and along our coasts.”