Trump and Biden face off in first presidential debate 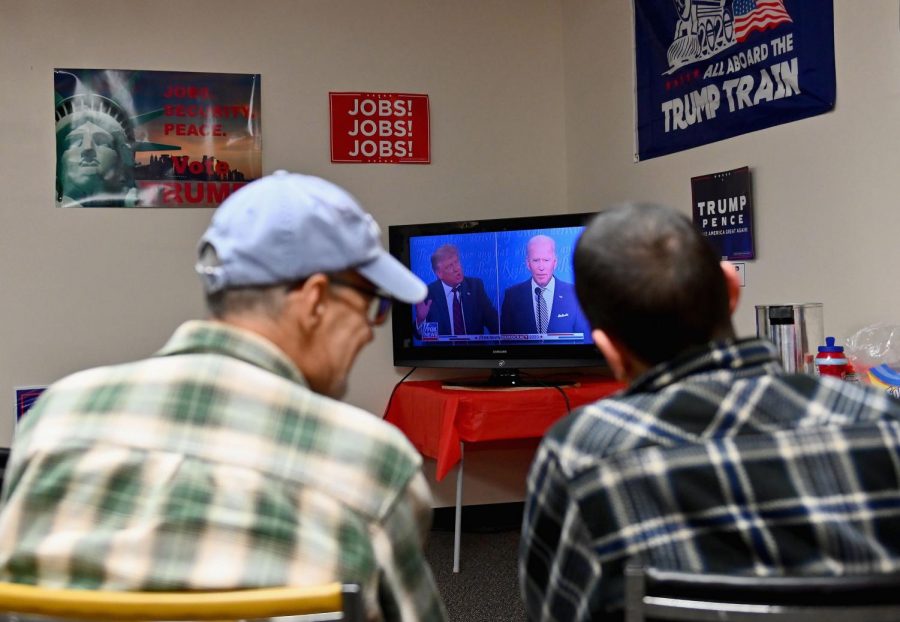 Moderated by Chris Wallace in Cleveland, OH, the first presidential debate was held between former Vice President Joe Biden and current President Donald Trump where they discussed a number of relevant issues happening in the nation.

Throughout the debate, Wallace seemingly struggled to maintain the peace between the two candidates as they talked over one another.

The debate began with questions about Trump’s Supreme Court nominee, Amy Barrett after the death of Associate Justice Ruth Bader Ginsburg. Wallace questioned why each candidate thought they were right in this issue. During this segment of the debate, Trump repeatedly interrupted both Wallace and Biden.

Trump stated that because he was elected in 2016, he should have the responsibility to nominate the replacement for Ginsburg.

Biden’s response led to the next question, explaining how Trump should not be held responsible for making any sort of decision because he plans on taking away Obama Care, leaving thousands of people left uninsured.

Left to explain his healthcare plan, Trump said that he plans on splitting prices in half while still having better coverage than Obama Care.

“He has no health care plan, he only sends out wishful thinking,” Biden said, believing that Trump’s healthcare plan will only be offered to people who are eligible for Medicaid.

Healthcare was a significant topic during the debate, mostly due to the coronavirus (COVID-19) pandemic. Within this topic, subtopics of campaign strategies and vaccines were brought up. Trump suggested that Biden chose to hold smaller gatherings because he did not think anyone would show up compared to how many people showed up to Trump’s rallies.

“Trump says that the American people should trust in the scientists creating the vaccine, but we cannot trust Trump,” Biden said, adding that Trump has previously said that the virus would go away on its own. Biden also stated that Trump has ignored the 200,000 people in the US killed by COVID-19, believing that “it is what it is, because you are who you are.”

Moving forward from the healthcare topic rather quickly, Wallace repeatedly asked Trump about his federal income taxes in the previous years, bringing up that records show he only paid $750 in 2016 and 2017. In response to this, Trump promised that the population will get to see that he paid millions of dollars each year despite having any record showing this.

Biden returned to his earlier remark that American voters cannot trust Trump as a question regarding the protests rocking the nation.

“This man is a savior of African Americans,” Biden asked rhetorically. Biden has been gaining leverage by mentioning a recent poll by The New York Times and Sienna College showing that Biden led Trump among African American voters 81% to 7%.

Trump appeared to be annoyed by Biden’s remarks on these polls, he began to heckle and almost challenge Biden to name groups that support him and his campaign.

In response to these questions, Biden asked Trump if he would simply shut up and called him racist and “Putin’s puppy.”

This interaction led to a domino effect between the two candidates, each of them going from one insult to the next. One of these insults included Trump attacking Biden’s sons as well as the American military.

Regaining control between the candidates, Wallace changed the subject to climate change and their views on the matter.

Biden’s answer to the climate change issue at hand included his plan to make federal investments in renewable energy, weatherize four million buildings and pressuring Brazilian officials to stop deforestation in the Amazon.

Towards the end of the debate, Trump said that he is “counting” on the Supreme Court to look at the ballots from the result of the presidential election. He stated this because he believes that “this is going to be a fraud liege you’ve never seen,” speaking about voters being able to cast their vote until Nov. 10, days after the actual election.

In the first of three debates covering a number of topics, Wallace reined in the candidates to wrap up the event, mentioning that the next debate will be held on Oct. 15 at 9 pm. This leaves only two more debates before the American people need to cast their votes on who will be president for the next four years.