The life and legacy of the “Notorious R.B.G” will live on for generations 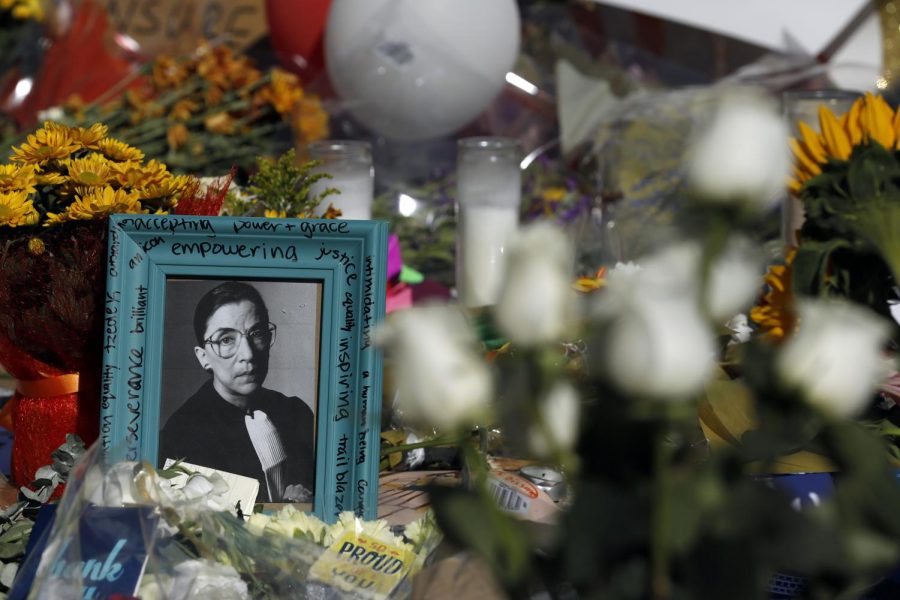 The Supreme Court Justice Ruth Bader Ginsburg passed away on Friday, Sept. 18 at the age of 87. Per Jewish tradition, when a person dies on Rosh Hashanah, they are considered a tzaddik, which means “a righteous and saintly person.” NPR reporter Nina Totenburg tweeted in regards to the tradition, affirming this belief.

A Jewish teaching says those who die just before the Jewish new year are the ones God has held back until the last moment bc they were needed most & were the most righteous. And so it was that #RBG died as the sun was setting last night marking the beginning of RoshHashanah

The event has left many Americans grieving, perplexed by what the future has to hold for Ginsburg’s now vacant seat. At this moment, it feels appropriate to honor her legacy by reminding readers of the incredible work she did towards eliminating gender discrimination in all aspects of American society. We cannot let her life work and accomplishments be overshadowed by the tumultuous political period that we are currently experiencing. Zekher tzadik v’kadosh livrakha, may the memory of the righteous be a blessing.

Although Ginsburg is known for her time on the Supreme Court, she has a long history of advocating for women’s rights and breaking gender-discrimination barriers. Born into a working-class family in Brooklyn, New York, her mother always encouraged her to be independent and value education. Following this advice, Ginsburg graduated first in her class from Cornell University.

While at Cornell she met the man who would become her husband of nearly 60 years, Martin Ginsburg, who in her own words, “was the only boy who cared that she had a brain.” Following their marriage, Martin was drafted to serve in the military in 1954. While he was serving, Ruth gave birth to their first child, Jane. When he returned, both him and Ruth enrolled in Harvard Law School, where Ruth faced a tremendous amount of gender-discrimination for “taking the place of a qualified male.” Despite this, she became the first female member of the Harvard Law Review, excelling academically and exceeding expectations.

The family faced hardship in regards to Martin’s cancer, as Ruth took on assisting him with his studies, continuing her own studies and raising their daughter during the time period. After Martin recovered, the family relocated to New York, where Ruth attended Columbia University and Martin worked at a law firm. She ended up graduating first in her class and joined the school’s law review. Following her graduation, she clerked for U.S. District Judge Edmund L. Palmieri, taught at Rutgers Law School and Columbia Law School and served as the director of the Women’s Rights Project for the American Civil Liberties Union (ACLU). In this position, she was able to make significant contributions for women in regard to the Equal Protection Clause of the constitution. Additionally, she co-authored a book in Swedish as part of a collaboration with Anders Bruzelius on civil procedure in Sweden.

The landmark cases include the United States v. Virginia, which argued the validity of the male-only admission policy at the Virginia Military Institute. This case found that having a male-only policy violated the Equal Protection Clause and that having a separate school for women is not sufficient. Another would be Shelby County v. Holder, which argued two different provisions of the Voting Rights Act of 1965. In Ledbetter v. Goodyear Tire & Rubber Co., Ledbetter sued Goodyear after finding out that she received lower pay over her 19 years with the company than the male employees. The court ruled that “[because] the later effects of past discrimination do not restart the clock for filing an EEOC charge, Ledbetter’s claim is untimely.” Ginsburg gave a dissent from the bench, accusing the all-male court of being “indifferent to the gender pay gap.” In Burwell v. Hobby Lobby, the court ruled that for-profit companies could not be required by law to cover contraceptives for their employees. Ginsburg dissented, stating that this would target employees “who do not share their employer’s religious beliefs.” Notably, in Bush v. Gore, Ginsburg stated “I dissent” as opposed to the usual “I respectfully dissent.”

During her time with the ACLU as part of the Women’s Rights Project, Ginsburg began to fight the over 1,000 different laws that were specifically designed to limit women’s advances in society. They included being able to administer an estate, qualifying for medical and housing benefits, buying or renting property, having a credit card, opening a bank account, working while being a mother and working while pregnant. She didn’t stop at just women’s rights, shown in cases such as Shevin v. Khan and Craig v. Boren. One of her more notable cases, Weinberger v. Wiesenfeld, argues that a section of the Social Security Act discriminated on the basis of sex, given that Wisenfeld could not collect his deceased wife’s Social Security benefits but his child could.

The accomplishments of Ruth Bader Ginsburg go far beyond what I have briefly mentioned. Without the preservation of her legacy, we risk losing the progress we have made thus far. Through five different battles with cancer, Ginsburg continued to fight for women and future generations with sharp determination, knowing that her work had a profound meaning. She inspired so many women in the country to go after what was theirs and reclaim it in a society that was still clinging to patriarchy. As we take time to honor her, it is only fitting that I end with her own words.

“Fight for the things that you care about, but do it in a way that will lead others to join you.”