OPINION: We don’t have to tank the global economy to fight climate change 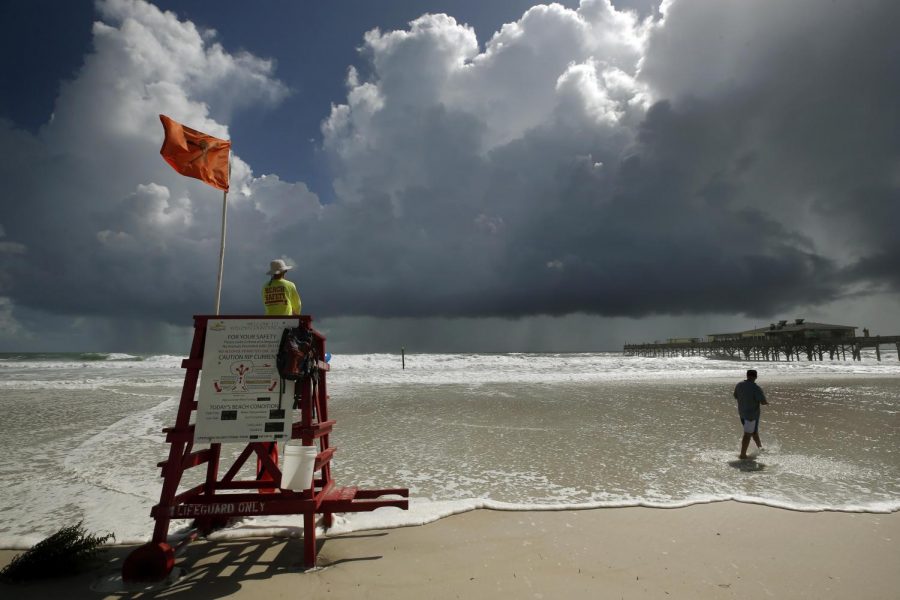 By Sunday, the pre-hurricane seas got rough, but there were still wave watchers ahead of the evacuation in Daytona Beach Shores. [News-Journal/Nigel Cook]

Climate change ranks high on the lists of both fears and challenges of modern society, and rightfully so. In the past five years alone, the U.S. alone was faced with unprecedented natural disasters. Major hurricanes like Irma, Maria and Michael in Florida and the Caribbean have rapidly intensified and ended up landfalling with much higher wind speeds than forecasted. Others, like Matthew and Florence in North Carolina, stalled over land for days and dropped record-shattering rainfall, triggering so-called “1,000-year floods” within two years of one another. Then you have storms that had both of these destructive traits, like Harvey in Texas and Dorian in the Bahamas. Unfortunately, scientists warn that these types of hurricanes will only become more common with global climate change.

To add insult to injury, wildfires are another disaster to have become more rampant and destructive. In western states like California and Oregon, it seems like each fire season is worse than the last one, with apocalyptic footage and sobering statistics dominating headlines each fall. In 2018 alone, for instance, the Woolsey Fire totaled the homes of many celebrities, and the Camp Fire nearly wiped out the town of Paradise, California, claiming a combined total of 89 lives. Warmer temperatures and more frequent droughts do not necessarily cause more fires, but they greatly increase the magnitude of already-burning ones.

We are seeing these effects across the United States this very minute. Although North Carolina is safe, at least for now, this year’s hurricane season in the Atlantic is on track to be among the busiest of all time. There are four named storms there as of Wednesday, Sept. 16, and one of them is currently ravaging Alabama and Mississippi. Hurricane Sally is not only bringing strong winds and storm surge to the area, but it also practically parked itself overhead, dumping feet of rain and causing catastrophic flooding. In Oregon, ongoing wildfires have caused at least eight human deaths and burned more than a million acres. The flames have also destroyed 1,000 homes and displaced tens of thousands of people. A separate wildfire in California has burned more than 18,000 acres and counting, and it was traced to a Sept. 5 gender-reveal party gone wrong.

The toll of climate change is becoming more apparent than ever. The further we get into the future, the worse the destruction will get. Eventually, sea level rise will overwhelm tightly-packed coastal regions and force mass migrations. Severe pandemics like COVID-19 will also likely increase in frequency and intensity as heightened temperatures alter the behavior and evolution of potentially dangerous microbes.

To flatten the catastrophic curve of global warming, we must take action now. This crisis is definitely not something we should live with. Radical changes need to be made to the global society, especially the U.S. where President Donald Trump is a self-sworn climate denier and refuses to do anything about it. Or anything good about it, at least. Clearly, federal action is needed, including the passage of new regulations, carbon taxes and reentry into international climate agreements.

But it will also be important for leaders to not focus on emotional impulses or political agendas. To tackle this serious challenge, they will need to base decisions not just on science, but also the economy. Former Democratic candidate and democratic socialist Bernie Sanders, for instance, managed to win the support of millions of young Americans by proposing a “Green New Deal.” It aims to ban all fossil fuels and radically reshape society in just 10 years. But such a policy would be too expensive to work and have massive implications, Fox News warned in February 2019. Such a plan, they say, would be way too abrupt and not provide enough time to transition from oil and coal to renewable energy, leading to mass unemployment of workers in these industries.

The plan would also cost trillions of dollars. It would send the national debt through the roof even if taxes are astronomically increased. Interest alone would cost the nation more than $1 trillion annually. The only way to try and blunt the unbearable costs would be to print more banknotes, rendering the U.S. dollar practically worthless and potentially causing a total collapse of the American economy, just like what’s been happening in Venezuela for several years. Such a policy would without a doubt be considered socialism, a flawed idea history has shown time and time again to not be in the best interests of a free people.

But fast-forward a year, to the COVID-19 virus and the subsequent economic shutdowns. The federal government has spent about 3 trillion dollars for stimulus and bailout programs. That is nowhere near the costs of the Green New Deal. In fact, the  Los Angeles Times argues these shutdowns helped us on the climate front somewhat, particularly with regards to spending less time on the road and telecommuting. These trends, the piece argues, should remain the new normal even after the pandemic threat subsides.  But don’t freak out: working from home will be much easier without all that COVID-induced stress.

Simply cutting unnecessary trips to the office, though, won’t be enough. While more than half the global population cut their travel by at least 50% in April, the reductions in emissions are only estimated to lower global temperatures by 0.01 degrees Celsius. On the positive side, though, countries could invest in carbon-reducing technologies and projects to help rebuild their economies. We would eventually ditch carbon for renewable energy, but such a transition would be gradual to prevent serious economic fallout. Scientists estimate these moderate reforms could slash carbon emissions by about 50% and limit global warming to 1.5 degrees Celsius above pre-industrial levels through 2050.

None of this is to downplay the threat of climate change. If left unchecked, the deadly phenomenon will only worsen. Clearly, urgent action is needed, and politics and state sovereignty must be ditched for international cooperation. But at the same time, global leaders need to be patient and willing to ease into measures, rather than flipping switches all at once. Just like pretty much every other problem out there, this problem has a solution. And a good solution. And multiple good solutions. Solutions that make a difference for the planet but don’t create another government-induced economic recession or depression. We can do this. We just need to get a little creative.