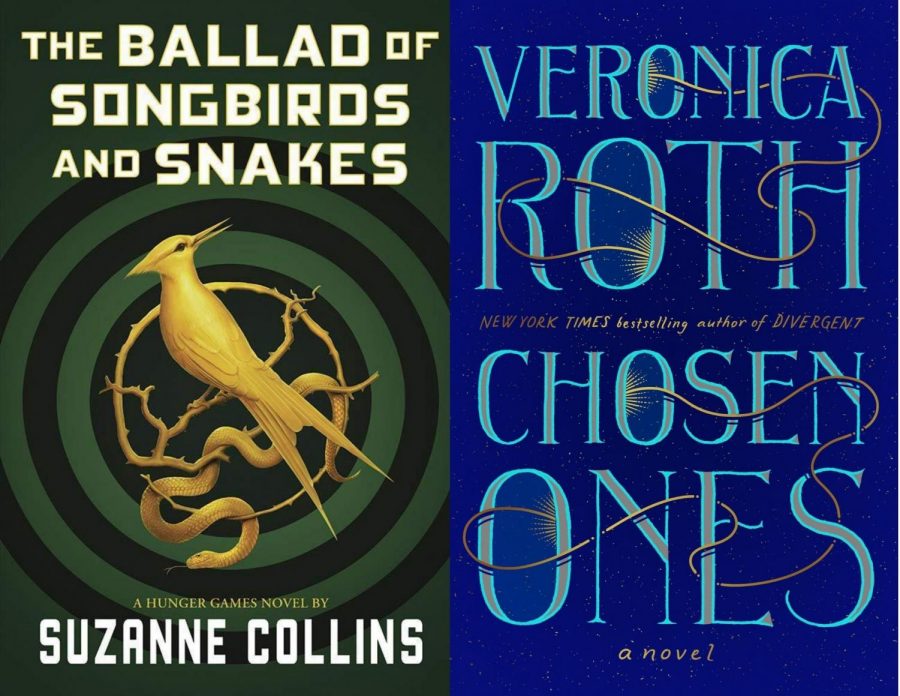 "A Ballad of Songbirds and Snakes" by Suzanne Collins and "Chosen Ones" by Veronica Roth.

When our generation thinks about the best series that shaped our young adult minds, what comes to mind? There are many YA novels and series that we continue to reread into adulthood, that inspired multiple fan fictions, and set off cult-like obsessions within fanbases along with countless wannabes trying to reach the same level of celebrity. We saw it with the “Twilight” series, though before the peak of adolescence for today’s college students, and of course, Harry Potter remained relevant to our childhoods despite being written for a different generation.

However, the epitome of young adult dystopia arguably belongs to two series: “The Hunger Games,” written by Suzanne Collins and “Divergent,” written by Veronica Roth. They are known for their interestingly foreign worlds, beloved characters, two female heroines, and movie deals that garnered blockbuster attention while bringing our favorite stories to the big screen. To the niche generation between Millennials and Gen Z, these books were definitive markers of our teenage culture, but even had the power to reach beyond their genre to adults and generations to follow.

In the wake of these epic series, how do Roth and Collins approach their next release?

We don’t have to wonder because both authors have released their next novel, each one taking a different step forward: Roth chooses to move on from the past success to a new one and Collins tries to prolong the attention of past success.

In Collin’s new book “The Ballad of Songbirds and Snakes,” she tries to awaken her dormant fanbase and capture the same obsession of the original series with a novel that focuses on the villain, President Snow. The “The Hunger Games” brought readers a female heroine to look up to in the form of Katniss Everdeen, a headstrong and clever archer that refuses to play the Capitol’s games, run by the sinister President Snow, by attempting suicide with her star-crossed lover Peeta. She leads a rebellion to end the Capitol’s reign after it almost took everything from her. But almost 60 years before Katniss’s Hunger Games, Collins has us root for a 17-year-old Capitol boy as a mentor to the doomed 10th Hunger Games, someone we know turns into a calculated dictator.

That is not to suggest that Collin’s depiction of Snow is not justified. “The Ballad of Songbirds and Snakes” provides context and texture to a one-dimensional villain. Evil doesn’t exist in a vacuum, and this novel explores the motivation behind a character that doesn’t believe his intentions to be evil and explore his path to the highest office. With that point of view, maybe Collins believed her novel to be more relevant to our current leaders. From a woman that once said her world isn’t too outrageous to predict America’s future, maybe this novel demonstrates of the making of a monstrous leader and how dangerous ideals become entrenched in our nation.

As for the novel itself, it is immediately captivating just like the original novels. Even after years of absence, Collins proves she still has what it takes to build a story that forces you to devour it in as little time as possible. As an expertly done Collin’s classic, each chapter leaves you on a cliffhanger, so you just must keep reading. While the plot is not as tightly woven as the original series, there is enough suspension of disbelief and callbacks to the original series to keep a fan entertained.

As for “Chosen Ones,” Roth jumped back into the often tepid waters of new book releases with the hope to garner the same admiration as she did for “Divergent.” In that pursuit, she creates not only another good fantasy novel, but one that adapts itself for a more mature audience. The middle and high school readers of “Divergent” are older now, and Roth responds with a novel for a generation moving into adulthood.

To accomplish that, Roth’s chosen ones are 30-year-old veteran heroes dealing with the aftermath of defeating the world’s villain. They suffer from the onslaught of press, PTSD, isolation that comes along with their fame status, and uncertainty of where to go next. It is a relatable position for a generation on the precipice of creating a life for themselves, with the nagging notion that the best might be behind them. Roth treats each character not as wonder-kids with perfect ideals and motivations, but as flawed and weathered people that have realistic standards for their lives.

That does not mean the whole book is directionless; the chosen ones quickly get sucked into another disaster. Their first enemy, the Dark One, returns and they must adapt to his new transformation while also grapple with how much they have changed since his last defeat. Roth proves she can blend fantasy with the complexity of realistic adulthood, tying in references to the world we live in now. That’s impressive considering how we often patronize the fantasy genre and reduce it to just the world of young adult fiction.

Ultimately, readers will better identify with Roth’s nuance in “Chosen Ones” than the return back to youth from Collins’ “A Ballad of Songbirds and Snakes.” What Collins doesn’t realize is that her devoted fans have matured and have moved on from the horrors of an imagined world to the horrors of the current one we live in. And who can blame her? Another novel from Panem offers familiarity and nostalgia, an invitation to get lost again in a world we know how to navigate. The shortcoming lies in the assumption that “The Ballad of Songbirds and Snakes” would endure in readers’ consciousness like the original series did. “Chosen Ones” shows that Roth is paying attention to not only her audience but the world that they live in. She takes the fear and uncertainty of our reality and puts it in a form that she can mold, subsequently giving us a better sense of control over our own lives.

Both books are worth reading. They each bring the same sense of nostalgia and comfort that we all seem to be looking for during this time. These books are reminders that we need both of them for different reasons—to remind us of our past and to encourage us to to fight for a better future.