Da 5 Bloods: As good as gold 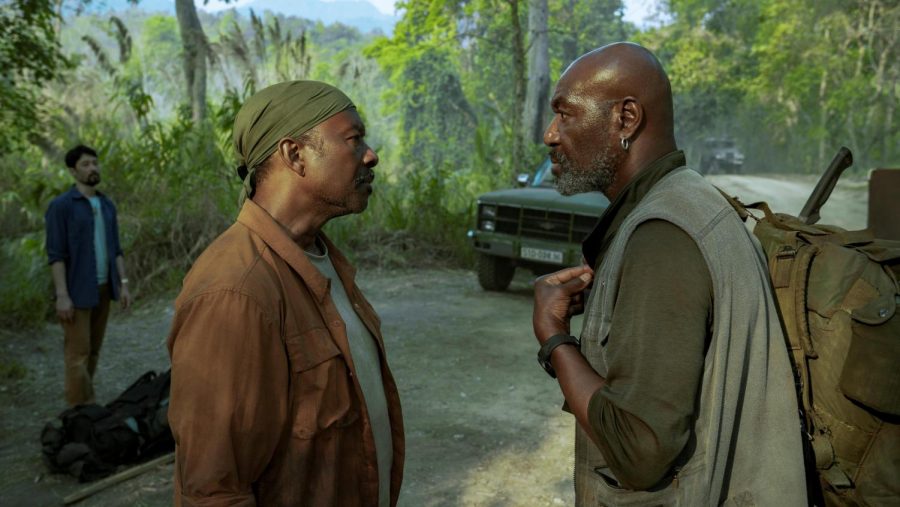 Upon the release of Spike Lee’s “Da 5 Bloods” on Netflix on June 12, many viewers made note of the film’s impeccable timing. It has not only released amid a global pandemic in which millions have free time to watch Netflix, it has also released in a historic moment of cultural strife against racial biases in law enforcement. Being a film that explores race alongside themes of war and brotherhood, “Da 5 Bloods” is perhaps the perfect film for this particular moment in history.

The film tells the gripping story of four African-American Vietnam veterans (Delroy Lindo, Clarke Peters, Norm Lewis, and Isiah Whitlock Jr.) and one of the veteran’s sons (Jonathan Majors) who journey into the jungles of Vietnam to recover the suitcase of gold they buried during the war—as well as the remains of their fallen comrade (Chadwick Boseman). Along the way, they interact with landmine removers, fall into conflict with local militia and face their inner demons.

“Da 5 Bloods” represents a fearless combination of Spike Lee’s directorial habits—that of his traditional narrative presentation and that of his more experimental tendencies. The decision to shoot scenes taking place in the 70s in 16mm gives the film the flair that comes with merging the old and the new. It’s more than a little fun to see Chadwick Boseman, Black Panther’s T’Challa, as if he were in a feature film from the 70s.

Every actor in the film’s ensemble does an excellent job with their unique roles: Jonathan Majors brings energy and youthfulness to his role, Norm Lewis shines as the group member with the most notable moral compass, and Nguyen Ngoc Lâm, in a smaller role, sells his expression of the pain felt by Vietnam due to the war. Delroy Lindo especially stands out through his portrayal of Paul and offers a brilliant visual commentary on the effects of post-traumatic stress disorder.

Terence Blanchard, music composer and longtime partner of Spike Lee, has crafted a sweeping orchestral score for this film. The music maintains the memorable motifs and call-to-action sensibilities of Blanchard’s past scores of Spike Lee films, yet Blanchard also utilizes the bursting crescendos and stark sincerity that are much more at home in a Steven Spielberg film than a Spike Lee film. These additions make the film’s original score a joy to behold—perhaps it’s Blanchard’s time to win an Oscar!

The cinematography of the film also stands out as an exceptional feature of the film. This is perhaps Spike Lee’s most colorful film to date, capturing the lush greenery of Vietnam as well as the bustling Vietnamese cultures in the background. Spike Lee is also innovative in terms of shot size and shot type, striking a balance between immersing the viewer and challenging them.

All in all, “Da 5 Bloods” represents the cementation of Spike Lee’s return to form. It is a revelation in directing, writing, casting, scoring and a myriad of technical attributes. It is a war film that introduces riveting and thought-provoking concepts about the war in focus as well as the war film in general, and Netflix must be commended for being brave enough to share it with the world.