“Tied at two, bottom of the ninth inning. UNCW and nationally-ranked East Carolina…a chance for a walk off win,” was the call 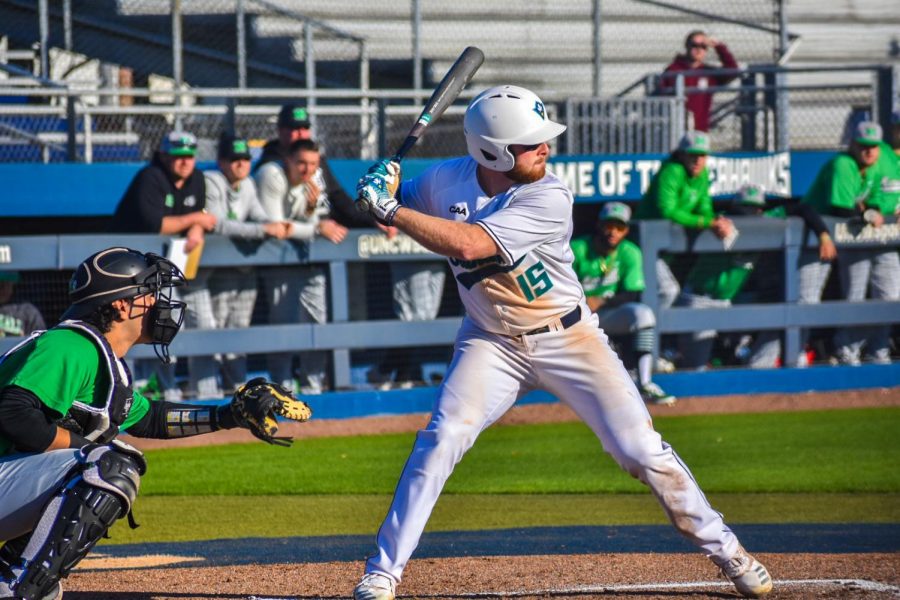 WILMINGTON – The stage was set as Brooks Field glistened under the bright lights on UNC Wilmington’s campus. The night of March 11, 2020 would soon have its own story in the history book of the UNCW-East Carolina rivalry…and Matt Suggs’ signature would be at the bottom of the page.

“We respect them [ECU] a lot as a baseball program and as a university…that’s what makes the rivalry so special,” said Suggs. “When we play them at least twice a year, it’s always a hard-fought game.”

ECU and pitcher Ryder Giles would elect to intentionally walk the Seahawks’ Trevor Marsh in order to face the, then, hitless Suggs. A decision that put two Seahawk runners on base. A decision that brought ‘Baby Shark’ to the dish. A decision that would come to haunt the Pirates just one pitch later.

“It puts that bittersweet taste in your mouth because it’s disrespect…they [ECU] think they have a better chance to get you out than the guy in front of you,” said Suggs.

The Wilmington native stepped into the batter’s box for the fifth time looking for a different outcome than his previous four at-bats, although this time he was walking into a much bigger situation.

“My approach was to go up the plate hunting a fastball early because Giles is a slower pitcher that relies on his off-speed more than most,” said Suggs. “I wanted to get ahold of the fastball if he threw that and lay off of the breaking ball.”

As Suggs settled into his stance, Giles turned back towards the go-ahead run on second base…the righty was only delaying the inevitable.

An opportunity of a lifetime stared Suggs dead in the eyes. With one swing of the bat, the sophomore catcher could etch his name into the hearts and memories of past, current and future Seahawks.

“I knew I had hit the ball well when it came off the bat,” said Suggs. “I was pretty certain that it was going out when I hit it.”

ECU outfielder Alec Burleson gave chase to the blast but ended up watching it land on top of Homerun Hill over the left field fence.

After rounding third base, Suggs stared down a mob of white jerseys that anxiously awaited his arrival. Halfway down the third base line, no. 15 threw his helmet in the air and jumped on home plate as if to put an exclamation point on the end of the story he had just written.

The only thing that would rain on Suggs’ parade that night would be the Gatorade shower that his teammates poured on top of him…but certainly nothing that a Cookout tray and Oreo milkshake could not fix.

“The walk-off homer is for sure my number one best sports moment of all-time,” said Suggs. “It’s special because I knew that we had fought and clawed our way through that whole game, and I know we earned that win and put everything out on the diamond that night.”

Suggs’ walk-off homer ended up being the final moment of the Seahawks’ 2020 season. In the blink of an eye, COVID-19 stole something from collegiate athletes and students all over the country. Something they can never get back. All of a sudden, senior athletes had their final seasons cut short and students across the nation were deprived of graduations.

So, thank you Matt Suggs and the entire 2020 Seahawk roster and coaching staff. Whenever we think of COVID-19 and how it impacted us all, at least we can think back to the night of March 11, 2020 when… “tied at two, bottom of the ninth inning. UNCW and nationally-ranked East Carolina…a chance for a walk off win,” was the call.