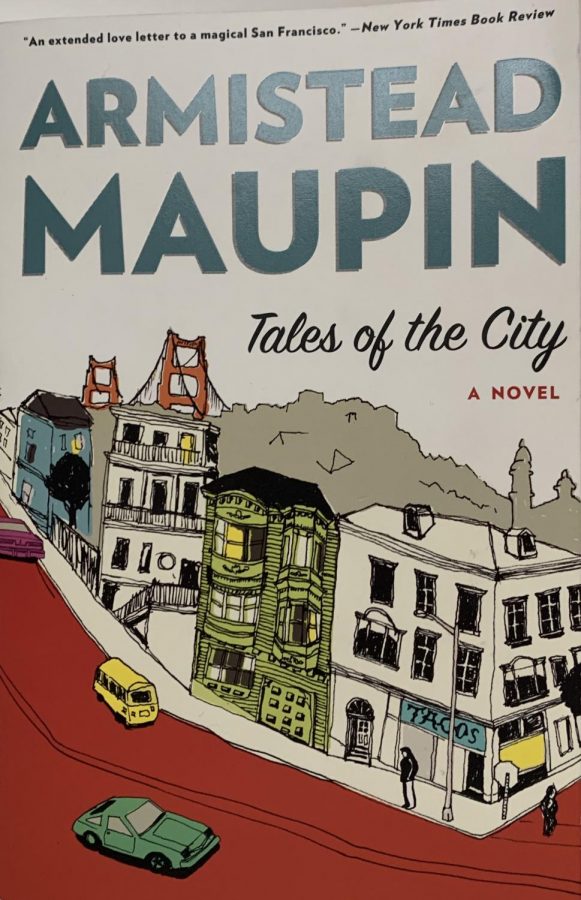 "Tales of the City" by Armistead Maupin. Photo by Brenna Flanagan.

Despite its almost 40-year-old age, Armistead Maupin’s “Tales of the City” can still captivate readers with its bite-sized chapters perfect for short attention spans. There’s a lot of books that try to capture the essence of 70s San Francisco, but if you want a real taste of life in that cultural hub, Maupin captures it adeptly with the experience of someone who was there.

There are many characters involved in “Tales of the City” and each one provides a piece of the patchwork that is this novel. There is Mary Ann, a San Francisco visitor that decides to give up her conventional life in Cleveland. There’s Mona who is trying to figure out her life in the city, along with her best friend Michael, a gay man looking for adventure all the time. There’s Brian, an aggressive lady’s man just trying to get by. There’s also Beauchamp and Dede, an upper-class couple that exude perfection but despise their life behind closed doors. Then there’s Anna Madrigal, the accepting and wise landlady of 28 Barbary Lane, plus a host of other characters connected to the lives of the eccentric boarding house.

There are a lot of stories in “Tales of City” and when you first start reading it, you’ll think there’s not really a developing plot to connect all these bits of characters’ lives together. For that reason, it is a bit hard to get used to the constant switching of characters every few pages. That structure can also be beneficial when you don’t have time or the attention span to read lengthy chapters that require committed concentration. Once you get used to the structure, it’s easy to find you’ve devoured 20 chapters in one sitting, especially when you hit the middle of the book, and Maupin starts to hook you into the storylines with raised stakes.

One distinguishing factor of Maupin’s writing is that it is almost entirely dialogue-based. There is no sense of Maupin’s voice, only his character’s consciousness without judgment from a narrator. The story comes from Maupin’s characters surrounding 28 Barbary Lane interacting with each other, their stories interweaving in a way that almost seems impossible for a large city. Their interactions range from the mundane to the wild, the stories border lining on soap opera, but not going too far into the suds to turn readers away. It is a testament to Maupin’s skill as a writer to be able to capture each character separately and build their relationship with the reader. It is also worth noting that Maupin does an exceptional job of keeping readers engaged even when there seems to be no hero of the story, no protagonist to guide readers through the right path. All the characters get to be protagonists and they are all also allowed to be unlikable at times.

While not fully convinced at first, this book swept me away in all its 350 pages, finally convincing me that I need to read the other eight volumes of Maupin’s “Tales of the City” series just to keep up with the lives of these addicting characters.

Check out past reviews and what books are coming next in the Quarantine Book Club here. We welcome suggestions for future book club picks in the comments or on social media!