Can we get back into sending handwritten notes and letters 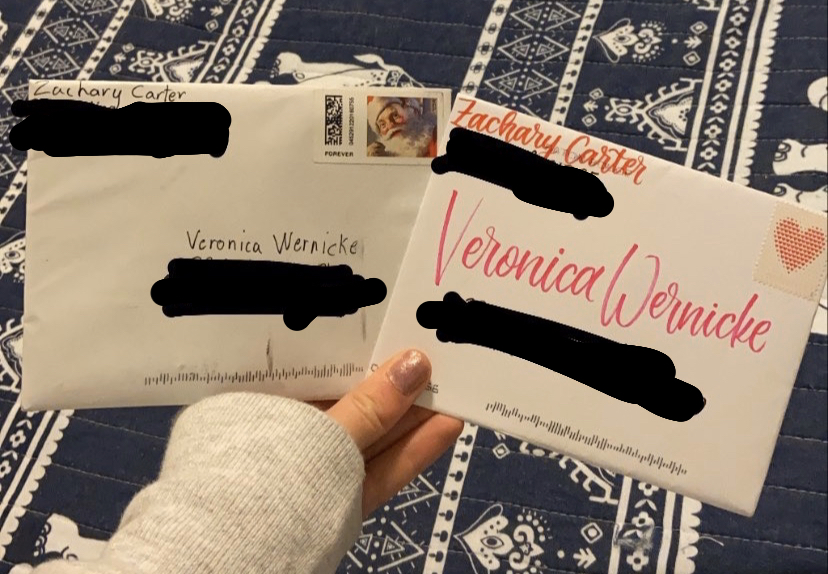 A couple of handwritten cards I have received from my boyfriend.

When was the last time you wrote a handwritten note, letter or card to someone? I am sure your grandparents send you one each year for your birthday, but did you think to write a thank you note back? In our day and age of technology and instant messaging, handwritten cards and the like have seemed to be left behind.

The last time you probably wrote thank you notes were after a birthday party you had as a kid, thanking everyone for their gifts—and your parents probably made you write them.

As a writer, I have always loved writing and receiving handwritten notes, letters and cards versus an email or instant message on social media. Although, I have found myself just as guilty of sending a quick note on Facebook instead of taking a few more minutes and sitting down with pen and paper to put my thoughts down.

Handwritten notes take more thought and reflection before putting pen to paper. They feel more genuine than sending an instant message on social media, which can be composed and set in a matter of seconds depending on the nature of the message.

Receiving a handwritten note in the mail has always brightened my day and instantly made me smile after reading it. The fact that someone took time out of their day to sit down and write me a message shows how much they care about me. Yes, instant messages sent online have made my day as well, but not in quite the same way as handwritten ones.

Call me old fashioned and nostalgic but I have kept pretty much all the cards I have ever received from friends and family—give or take a couple here and there. If I am having a bad day, I can take a few moments to sit down and go through the cards to remind myself of all the people that love and care about me.

I moved around a lot during my childhood, and during an especially hard move from Ohio to Virginia, my best friends and I started writing letters to each other to keep in touch—all of us were just starting to get cell phones, so they did not have quite the power of us as they do now.

I always looked forward to the days when I would get a letter from one of them. But the older we got and with the greater emergence of cell phones and social media, we fell out of this habit.

Recently, online greeting card retailers and apps like TouchNote and Punkpost have allowed for easier snail mail at the touch of your fingertips. Instead of having to worry about having cards and stamps on hand, these apps allow you to craft personalized cards from your phone.

TouchNote allows you to send either greeting cards or postcards with personalized pictures and typed text. Meanwhile, Punkpost sends out printed hand-designed greeting cards, and then handwriting artists write out personalized messages in your chosen font and then mail them—the first card you send with Punkpost is free.

I have sent and received cards from both of these apps and they turned out great. While my boyfriend and I can text and Facetime instantaneously anytime, we still both take time to send handwritten notes, through our own means and apps like the one mentioned above. Sending notes to each other only reaffirms how much we care about each other, and I know that we both look forward to receiving the notes.

You can also easily buy a pack of blank or decorated cards at practically any store like Target or craft-specific ones like Hobby Lobby for less than $5. A pack of 20 stamps costs $11, so you are looking at $16 to make someone’s day. That seems more than worth it.

So, the next time someone does something nice for you or you simply want to show someone you are thinking about them, take the time to write and send them a handwritten note. I am sure it will brighten their day as much as it does when I get handwritten notes, letters and cards in the mail.